Every Navy officer must understand and think critically and creatively about the fundamental naval tactical problem: how to apply the elements of naval combat to “attack effectively first.”1 Memorization of procedures, application of checklists, and repetition of tactical actions in training scenarios and drills are essential to building skills, proficiency, and confidence—but these actions fail to account for the broader context in which naval tactics are played out. Navy officers who understand the problem as a gestalt will be more skilled at finding solutions.

• Scout to locate the enemy.

• Integrate firepower and scouting to deliver an attack.

• Protect the ability to conduct an attack while unsettling the enemy’s targeting processes.

• Apply maneuver to either support the delivery of firepower or avoid detection and being fired on by the enemy.2

They emphasize that these foundations are best understood as processes rather than principles. Manipulated effectively, they strike a first blow against the enemy—disrupting his plans—and yield a definitive advantage to the attacker.3 This advantage must be exploited to maintain tempo toward achieving tactical objectives.

Attacking effectively first involves more than merely applying mechanical efforts to deliver fire. Hughes and Girrier note that the challenge is not a one-sided, isolated event, but a multi-layered, two-sided affair against a thinking enemy. Therefore, the thoughtful tactician must realize that to attack effectively first requires not only targeting the enemy and successfully launching weapons, but also protecting that ability to target the enemy and disrupting the enemy’s ability to solve its own naval tactical problem. All the while, the enemy is acting simultaneously, applying the same processes to conduct an effective attack against you.

Thinking seriously about how to attack effectively first is paramount in maritime warfare. First, it forces Navy officers to think about tactics beyond following checklists. Simply memorizing the detect-to-engagement sequence against an antiship cruise missile, the sonar equation, or the fusing of naval gun rounds does not address the challenge of combat at sea. A training regime that applies procedures and builds the “muscle memory” to respond to combat action is necessary—it is the “how to do” of naval tactics—but this procedural knowledge should come only after doing the homework of thinking critically about the naval tactical problem.

Mastering tactics requires understanding the theoretical underpinnings and their link to doctrine and practice. This second form of understanding is known as declarative knowledge and is arguably much more important than the procedural knowledge. It is the “what to do” of naval tactics. 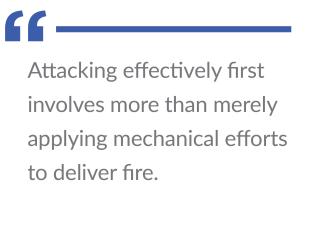 Second, when Navy officers think critically about the fundamental naval tactical problem, they create a common understanding throughout the force for employing naval tactics. Doctrine or fighting orders are intended to align the actions of naval forces. Understanding the fundamental problem gives context and meaning to doctrine and tactics. It contributes to unity of effort, reduces friction, and fosters independent action. Exploiting every edge is necessary in modern maritime warfare, which will be fast, violent, and feature razor-thin margins of victory.4 The fleet cognitively aligned in thought and habit in solving how to attack effectively first will have the advantage.5

In today’s navies, there can be an overreliance on technology at the cost of developing officers’ ability to think about tactics. Warfare and weapons tactics instructors can mitigate shortfalls and serve as subject matter experts, but all officers ultimately must be able to use their judgment and intellect to make timely decisions in executing naval tactics.

Attacking effectively first is the fundamental naval tactical problem, and even the most junior Navy officer should understand and be able to clearly articulate it. The primary objective of naval tactics is destruction of the enemy, because that is how navies win maritime battles.6 Attacking effectively first achieves this objective. It deserves serious, mindful reflection.

Captain Hernandez is an associate professor in the College of Distance Education at the U.S. Naval War College, Newport, Rhode Island, where he previously served as Chairman of the Joint Military Operations Department. On active duty he served as commanding officer of the USS Patriot (MCM-7) and Milius (DDG-69) and as commander, Mine Countermeasures Squadron Three.

By Captain Wayne P. Hughes Jr., U.S. Navy (Retired)
The Navy must integrate tactical education into its graduate school programs if it wants to produce leaders who are prepared to fight and win future battles.
P Special

A Guide to Reading Fleet Tactics

The Master of Fleet Tactics Unleashed