Is there any hope for the Navy–Coast Guard ‘National Fleet’ concept?
By Scott Truver and Brian O’Rourke
Proceedings
Vol. 146/8/1,410
Need to Know
View Issue
Comments

More than two decades have gone by since Coast Guard leaders convinced the Navy to embrace the idea of a “National Fleet.” This concept takes into consideration Coast Guard contributions to U.S. national and international security roles, missions, and capabilities as well as its more traditional maritime functions—search and rescue; safeguarding environmental and natural resources and fisheries; law enforcement; and maritime safety. Enthusiasm for a national fleet seems to have waned, much like the Navy’s 2007 call for a global “1000-Ship Navy” that is little more than a historical artifact today.

In September 1998, then–Chief of Naval Operations (CNO) Admiral Jay Johnson and U.S. Coast Guard Commandant Admiral James Loy signed the National Fleet Policy Statement, pledging the two services to plan, acquire, and maintain forces that support and complement each service’s roles and missions. Admiral Loy had earlier broached the idea at a Tufts University conference, followed by his setting up at Coast Guard headquarters a two-person “think tank” that in May 1998 produced a first draft. This was shared with the Navy, ultimately leading to the joint policy statement four months later.

The Navy–Coast Guard National Fleet would have three primary attributes. First, it would comprise ships, boats, aircraft, and shore command-and-control nodes that were affordable, adaptable, interoperable, and possess complementary capabilities. Second, these forces would be designed around common command, control, and communications equipment, weapon and engineering systems, and coordinated operational planning, procurement, training, and logistics. Third, the National Fleet would be capable of supporting the broad range of U.S. national security requirements, from power projection to homeland defense.

Previous Navy–Coast Guard peacetime integration had been frugal, committing “one cutter-year” of high-endurance cutters to regional combatant commanders, with a single, one-cutter visit to a Chinese port each year. Even such anemic forward presence facilitated crisis response, as when the USCGC Dallas (WHEC-716) delivered humanitarian aid to Georgia in 2008 in the face of Russian adventurism.

Change was tough. Some on the CNO’s staff were worried that a cash-poor Coast Guard would lobby for ever more Navy-type/Navy-owned, Coast Guard–operated systems. (The Navy nominally owns most Coast Guard weapons and guns larger than .50-caliber machine guns, for example.) Some Coast Guard planners agonized that the Navy would slough off undesirable roles and missions—mine countermeasures, for example.

Updates to the 1998 fleet concept—in 2006, under CNO Admiral Michael Mullen and Commandant Admiral Thomas Collins; a revised June 2013 policy statement; and in 2015, signed by CNO Admiral Jonathan Greenert and Commandant Admiral Robert Papp—resulted in the National Fleet Implementation Plan “to increase the commonality and interoperability of Navy and Coast Guard forces and better enable the two components to operate together in support of their mutual homeland security and national Defense missions.”

Such mutuality includes the 2019 freedom-of-navigation operation in which the Legend-class USCGC Bertholf (WMSL-750) passed through the Taiwan Strait.

Writing in Forbes (June 2019), commentator Craig Hooper noted, “The partnership between the U.S. Coast Guard and the Department of Defense is strong and long-lasting. But, like any marriage, partners cannot be taken for granted.”

That could be the case for the National Fleet, as Navy enthusiasm for implementation plan staff talks seems to be decreasing.

The Marine Corps plans to field the Carl Gustaf M3 84-mm multipurpose anti-armor/anti-personnel weapon system (MAAWS) throughout the infantry. When the service announced the plan in 2018, it said it intended to provide one to every squad in the service. It has also been considered as a replacement for the Mk 153 Shoulder-Launched Multipurpose Assault Weapon (SMAW) that combat engineer units employ. Both weapons are effective against concrete bunkers, armored personnel carriers, and other lightly armored vehicles, but the MAAWS has a greater range, and manufacturer Saab has teamed with Raytheon to test a laser-guided round. The Army has ordered more than 1,000 weapons for fielding in the next few years, and the Marine Corps was expected to join the Army contract to get a lower price as part of a larger purchase. 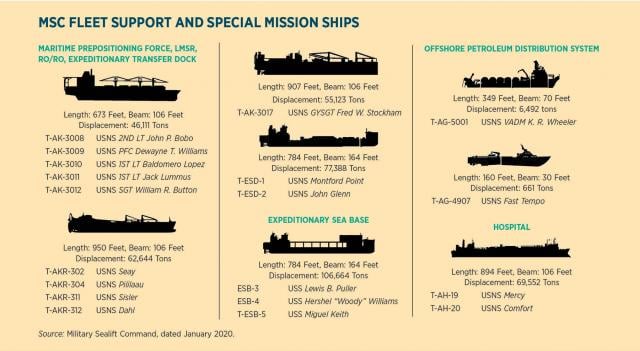 By Scott Truver, Brian O’Rourke, and Commander Brooke Millard, USCG
The Navy is starting to pay attention to offensive mine warfare again.
P Need to Know

By Brian O'Rourke and Jim Dolbow
A new USV, the FFGX selected, and two news subs are commissioned—one of them, for the first time, commissioned under way and under water.
P Need to Know

By Scott Truver and Michael Kofman
After some two decades of visions, strategies, and plans outlining a need for heavy and medium icebreakers, the Coast Guard finally has launched the Polar Security Cutter project.