The Mk 65 thin-walled bottom mine, the Mk 62 and 63 Quickstrike bottom mines, and the Mk 67 Submarine-Launched Mobile Mine (SLMM) are the only mines in the Navy’s inventory. All are shallow-water weapons, “influence” mines that fire on magnetic, seismic, and pressure “signatures” (or combinations of those), depending on target detection devices and settings.

The 2,000-pound Mk 65 bottom mine consists of a thin-walled, purpose-built mine case, nose faring, and tail section adaptable to a parachute option. The newest mine in the inventory, it entered service in 1983 and is used against submarine and surface targets.

The 500-pound Mk 62 and 1,000- pound Mk 63 Quickstrike mines use Mk 82 and Mk 83 (respectively) general-purpose bombs refitted with new tail assemblies to give the bombs mining and air-deployable capability. This makes it possible for carrier air wings to repurpose existing weapons, providing a quick-response capability.

The 2,000-pound Mk 67 SLMM entered service in 1979. The self-propelled SLMM can attack surface ships and submarines. Based on the Mk 37 torpedo, it can travel to areas not normally accessible to other mines.

The absence of an all-new mine for almost 40 years is ample evidence that mines, mining, and mine countermeasures have been the backwater of U.S. naval warfare. But of the 19 U.S. ships sunk or severely damaged since September 1945, 15 were victims of mines. Great power competition must take into account adversaries’ mining capabilities—the People’s Liberation Army Navy is estimated to possess some 80,000 mines, while Russia’s inventory may total 125,000 or more. Even lesser competitors have embraced mines: North Korea has around 50,000, and Iran 4,000–6,000 weapons.

The U.S. Navy’s strategic objective for mines is to make adversaries worry more about U.S. mines than the Navy worries about its adversaries’ and to avoid a repeat of a Desert Storm loss of an aircraft and crew while mining. This will require new weapons and tactics that do not place the
minelayers directly in the crosshairs of enemy weapons.

In September 2014, the Navy and Air Force demonstrated the extended-range Quickstrike-ER, a modification of the 500-pound winged Joint Direct-Attack Munition (JDAM)-ER. Dropped from a B-52H bomber, this was the first-ever deployment of a highly accurate, precision standoff aerial mine. A parallel effort successfully deployed a 2,000-pound Mk 64 Quickstrike-J from another B-52H. Testing has demonstrated that the Quickstrike-J can be released at altitudes greater than 40,000 feet and ranges greater than 40 nautical miles. With GPS guidance, aircraft can lay an entire minefield in a single pass without coming close to the target zone. The Quickstrike-J “Skipjack” has only the JDAM guidance kit. The 500-pound Quickstrike-ER “Flounder” has both a JDAM-ER guidance kit and a pair of folding wings.

The Navy also is expanding the concept of a “mine” to something that generates military effects beyond a traditional static, high-explosive warhead. Several initiatives portend a game-changing renaissance in U.S. naval warfare.

The Hammerhead program comprises several innovative, advanced mining concepts, components, and technology developments. These will provide undersea and seabed warfare capabilities delivered by unmanned surface or subsurface vehicles, in addition to manned platforms. The mines will be remotely controlled by secure wireless communication networks and able to discriminate among targets. Development efforts will accelerate on an “encapsulated homing effector”—a hidden torpedo—for wide-area coverage in deeper water than is currently possible.

Dr. James “Sam” Taylor, senior leader for mine warfare in the Program Executive Office for Unmanned and Small Combatants, told a November 2019 conference, “A resurgence in mining has taken place [recently]. . . . However, we’re trying to pivot smartly, deliver the capability the warfighter needs as quickly as we can, so we’re trying to use whatever authorities are there, whatever things we can.”

The Marine Corps released Force Design 2030 at the end of March. In it, the Commandant, General David H. Berger, outlines plans to restructure the Marine Corps to be smaller, leaner, and better equipped for “effectively playing our role as the nation’s naval expeditionary force-in-readiness, while simultaneously modernizing the force.” Among the most noteworthy changes proposed are a reduction of total force size, elimination of all seven M1A1 tank companies and most cannon artillery batteries, and an increase of light armored reconnaissance companies and unmanned aerial vehicle squadrons. Among the questions still to be answered are the document’s implications for the amphibious ship force. The Commandant had previously cast doubt on the once sacrosanct goal of 38 amphibious assault ships, and Force Design 2030 reasserts the need for “smaller, lower signature, and more affordable amphibious ships,” without addressing what the design and end strength of those will look like.

The nearly 10,000 Coast Guardsmen with summer permanent change of station (PCS) orders have been told to remain flexible, as the assignment season will be extended. Promotion boards and assignment panels have been postponed. While basic training continues in Cape May, New Jersey, new recruits’ admittance has temporarily halted, creating at least a three-week delay. May’s enlisted servicewide exam has been cancelled entirely.

The COVID-19 pandemic has largely shifted the Coast Guard’s support and training workforce to work remotely, but operational units continue to stand the watch. Around the world, they respond to mariners in distress and save lives; buoy tenders replace navigational aids; port security units patrol the nation’s harbors; and cutters continue to detect, apprehend, and interdict vessels conducting illegal activity offshore. In three weeks in March alone, the Coast Guard oversaw the debarkation of 250,000 cruise ship passengers, and the service continues to screen inbound vessels and crews to facilitate maritime commerce, ensuring shelves are restocked and medical supplies replenished. 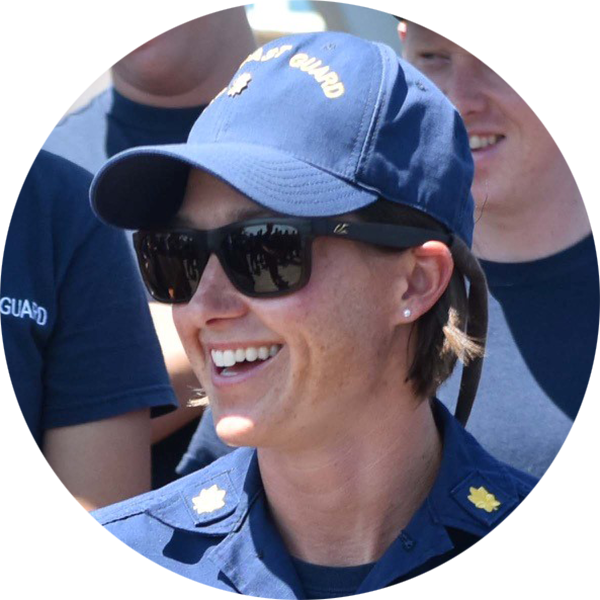 Commander Brooke Millard, U.S. Coast Guard, is the U.S. Coast Guard in-residence fellow at the U.S. Naval Institute. Previously she was the executive officer on board the USCGC Eagle (WIX-327) in New London, Connecticut.