The U.S. Navy’s Ghost Fleet Overlord program took a major step forward in September with the test-firing of an SM-6 Standard Missile from a modular launch cell on board the unmanned surface vessel (USV) Ranger. The Navy sees unmanned vehicles with small numbers of vertical launch system (VLS) cells as a comparatively inexpensive fix for the shortages in offensive firepower caused by program troubles with many recent shipbuilding projects.

The Navy released a video of the test on Twitter and YouTube on 4 September. In it, a white box similar in size to a standard shipping container opens from the top, as a four-cell module, appearing to be a standard Mk 41 box, is raised to the vertical position and the SM-6 is fired. The Mk 41 is the standard VLS on most U.S. destroyers and cruisers, although Zumwalt-class destroyers use the Mk 57 system. The SM-6 (also known as the RIM-174) is a two-stage missile with an active radar homing system. It has a range in excess of 150 nautical miles and a top speed of Mach 3.5—not quite hypersonic. The Navy uses it for antiaircraft, antiballistic missile, and antiship defense. In 2020, the U.S. Army announced plans to purchase the SM-6 as a long-range antisurface weapon.

Begun in 2018, Ghost Fleet Overlord is a joint program of the Navy and Office of the Secretary of Defense Strategic Capabilities Office (SCO). The Navy is pushing to incorporate more unmanned vehicles into its fleet, and Ghost Fleet Overlord exists to develop and test unmanned capabilities. In 2019, Phase II of the program launched, focused on testing command and control and some limited warfighting capabilities, including September’s missile launch test. The goal of the command-and-control tests is to demonstrate that the unmanned ships not only can travel from point A to point B, but also that they can do so while avoiding collisions and following the rules of the road without human intervention.

Earlier this summer, the USV Nomad traveled from the Gulf of Mexico to the West Coast, sailing 4,421 miles, nearly all autonomously. The ship’s transit of the Panama Canal was conducted in manual mode as sailors from Surface Development Squadron 1 operated the ship remotely from an unmanned operations center. The Ranger made a similar trip in 2020. In both cases, a small crew was on board for safety and security, but the ships’ operations were directed from shore. 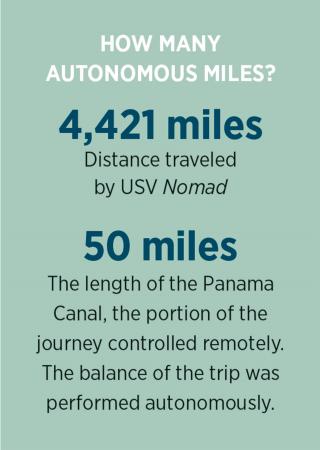 The Ranger and Nomad are commercial fast supply vessels of a type used in the offshore oil and gas industry. Each has been modified for optionally manned operations—autonomous systems with onboard sensors to direct the ship independent of off-vessel communications, remote command-and-control systems for manual operation from a distance, and standard crew quarters and controls in the pilothouse and engineering spaces for manned operations when needed. The Navy envisions similar ships performing intelligence, surveillance, and reconnaissance missions; offensive operations; contested sustainment and logistics; and other missions that might pose an unacceptable risk to crewed or legacy systems.

USNI News reported in July that the Navy is moving quickly toward testing fully unmanned operations of the USVs, with no safety crew on board. What is unclear is how, post-testing, the Navy plans to mitigate risks from a variety of underway issues: engineering casualties; communication and computer failures; or even piracy. In 2016, a People’s Liberation Army Navy ship stole a U.S. Navy Ocean Glider unmanned underwater vehicle (UUV) in full view of the USNS Bowditch (T-AGS-62), the Navy research vessel operating the UUV at the time. Though China eventually returned the Ocean Glider, the incident raised numerous security concerns for unmanned vehicles.

At the Sea Air Space 2021 exposition in August, the Navy acknowledged that, at least for the next several years, the ships will require small crews. Captain Pete Small, program executive officer for unmanned vessels, told an audience that some tasks—such as refueling—have not been automated and crews could be carried “for force protection or other measures that are required.”

The Air Wing of the (Immediate) Future

By Brian O'Rourke
The carrier air wing is undergoing a reevaluation, with the Navy considering many long-term changes.
P Need to Know

By Brian O'Rourke
Details begin to emerge on the V-BAT 128 unmanned aerial system.