Retired Air Force Lieutenant General Thomas Trask,  former vice commander of U.S. Special Operations Command, has written that Iran’s playbook creates problems for U.S. forces. It “offers an excellent model for achieving strategic objectives by operating in the ‘gray zone’ between peace and open kinetic conflict,” Trask says. “The gray zone often involves plausibly deniable use of force to minimize the consequences of escalation.” But turnabout is fair play, he adds. “To restore deterrence while minimizing risks of escalation, Washington should contest Tehran in the gray zone using limited military actions that fly under the radar, but which Iran still recognizes as executed by the United States.”

• Secure the nation from internal and external threats

The IRGCN’s approximately 20,000 personnel are tasked with protecting the Iranian littoral. The force is divided into five geographic naval departments, with the central headquarters at Bandar Abbas.

Although the IRGCN is upgrading its fleet’s size and lethality, it is a force composed mainly of smaller platforms (see table). Large numbers allow the IRGCN to overwhelm an adversary’s defenses with fast-attack platforms and swarm tactics to achieve tactical surprise as well as overcome wartime attrition.

The IRGCN enforces Iran’s territorial water claims and protects Iranian economic interests, including its offshore energy infrastructure, as well as countering illegal smuggling into and out of the Islamic Republic. It also monitors and tracks the movements of foreign warships and merchant ships operating in the Strait of Hormuz and Arabian Gulf. And IRGCN units regularly train and exercise to prepare for wartime contingencies. 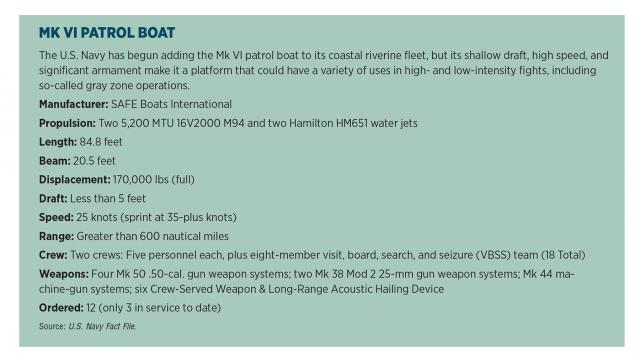 The People’s Republic of China increasingly seeks to consolidate control over what it perceives to be its sovereign “blue” territory. Sailors of the U.S. Navy should expect tensions on the high seas to increase with a variety of aggressive Chinese maritime actors. Will U.S. Navy watchstanders conducting freedom of navigation operations (FONOPs) know what to do when their ships are confronted by a group of Chinese fishing vessels in the South China Sea?

Fishing fleets are part of the People’s Armed Forces Maritime Militia (PAFMM), which supports the Chinese Communist Party’s strategic objectives—in particular, enforcing “sovereignty and security” in the South and East China seas. PAFMM’s fishing vessels are not simply engaged in commercial operations, but instead are subordinate to the central government, representing one element of China’s “Three Sea Forces,” the others being its maritime law enforcement (China Coast Guard) and naval (the People’s Liberation Army Navy—PLAN) forces.

So, what does this mean in practical terms, if you find yourself standing bridge watch at 0200 six nautical miles off a disputed reef?

It means your warship has been targeted and entered into the PLAN’s “common operational picture.” PAFMM vessels are equipped with reliable communication gear to provide targeting information to higher echelons of the Maritime Militia, China Coast Guard, and PLAN. The bridge and CIC watch teams must immediately recognize the ship has been targeted and be prepared for PLAN forces to be dispatched with accurate location, bearing, and speed.

Watchstanders also must understand PAFMM ships are directly subordinate to the PLAN and could at any time be ordered onto an intercept course, whether or not the U.S. ship is conducting a FONOP.

Watchstanders need to look out for “constant bearing, decreasing range” situations, in which a PAFMM vessel might be directed to collide with their warships, either to provide a casus belli to provoke a larger conflict or as part of a preplanned effort to disable the warship while claiming the U.S. Navy is unprofessional and unreliable.

Other nonkinetic engagements are possible, too, such as electromagnetic disruption of command-and-control and navigation systems. Sailors must also be prepared for lasers used to blind watchstanders or aircrew.

Bottom line: If you are steaming in the South China Sea and you come upon a group of Chinese fishing vessels, do not assume they are benign actors. They are anything but, and, increasingly, they will be used by Beijing to harass, until, worst case, they become the leading edge of an attack on a U.S. warship.

Meghann Meyers, “As Tensions Spike with Iran, A Look at How We Got Here,” Military Times, 3 January 2020