Skip to main content
The Coast Guard has the people and the expertise to respond to environmental disasters.
U.S. Coast Guard (Lynn Schrayshuen)

The Coast Guard Can Take on DoD Environmental Response Duties

Coordination of environmental protection and response efforts, regardless of where they may occur in the world, falls to the federal on-scene coordinator (FOSC), or his or her representative. In the Coast Guard, FOSC authority is assigned to the local sector commander. The federal on-scene coordinator representative (FOSCR) qualification is highly sought and difficult to attain. It is a high-level goal for officers and enlisted and can take up to two years to complete. FOSC statutory authority is provided by federal regulation and designated in 40 Code of Federal Regulations 300 and 33 CFR. The Coast Guard Marine Safety Manual provides additional policy guidance.

The Coast Guard shares jurisdiction for responses to discharges of oil or releases of hazardous substances, materials, or waste with the Environmental Protection Agency (EPA), differing only in geography. The Coast Guard covers the coastal zone, while the EPA has jurisdiction in the inland zone. The overlap between the two is covered in a memorandum of understanding. The Department of Defense (DoD) also has jurisdiction for responses, specifically from military owned and operated facilities or installations, including military vessels and aircraft, as well as anything related to weapons and ammunition. Their jurisdiction is not delineated geographically; it includes all facilities throughout the world—on land and in the water.

The DoD Joint Technical Bulletin (TB 700-2) classifies all ammunition and explosives into their respective hazard classes. But ammunition and explosives do not specifically include the weapons used to deploy them. DoD considers some of its assets weapons regardless of whether or not they are carrying specific ammunition. Incidents involving weapons are potentially sensitive for security reasons. Consider what might happen if a U.S. Navy aircraft carrier was being fueled at a pier and the fuel hose broke. There would be an oil spill that needed to be cleaned, but access to the base, the dock and the vessel itself would all be controlled.

The U.S. Navy has billets for only seven FOSCRs worldwide. This remarkably small staff is responsible not only for coordinating a response, but also ensuring that the facilities are compliant with international, federal, state, and local regulations for pollution prevention— including response plans, exercises, drills, and training. The Navy’s FOSCR stationed in Jacksonville, Florida, is responsible for naval operations in 12 states, covering four regional response teams. DoD does not maintain a dedicated funding string for environmental response operations, but rather depends on the operational funds of each unit to pay for any environmental response requirements. In addition, DoD considers environmental emergency response and planning to be a collateral duty—not a specific career path with focused qualifications explicit to this type of work.

In comparison, the EPA has approximately 200 FOSCRs in 17 locations for operations within the United States. The Coast Guard, with 35 sectors, has more than 1,000 FOSCR-qualified members. The Coast Guard also has access to three Strike Teams, the National Strike Force Coordination Center, and the National Incident Management Assistance Team, all of which are specifically designed to support emergency response operations, including environmental disasters.

This is not to say DoD does not have some environmental response capability. The Navy Supervisor of Salvage (SupSalv) supports the Navy, Department of Defense, and other federal agencies in marine rescue and salvage, pollution abatement, emergency towing, and deep ocean search-and-recovery operations, including minimal ice-breaking activities. SUPSALV has been assigned as one of seven special teams that are available to FOSCs. Long-standing interagency agreements between the Navy and the Coast Guard cover marine salvage and pollution incidents and the Navy’s support of such activities. SUPSALV works closely with the Coast Guard’s Salvage Engineering Response Team (SERT), which is a service of the Marine Safety Center (MSC). MSC’s primary responsibility is “conducting structural and stability plan review and design verification for commercial vessels.” Members of the MSC can join SERT, at which point they “also receive extensive training and qualification in salvage techniques and salvage engineering.” There are two main differences between these teams: 1) emergency response is a collateral duty for MSC members, and 2) SUPSALV maintains two warehouses of response and salvage equipment. The Coast Guard brings a wealth of knowledge to a salvage operation, but so does SUPSALV.

Regardless of the cause of an environmental disaster, FOSCRs are ready to respond to the impacts. In 2017, the USS Dewey (DDG-105) leaked 700 gallons of lubricating oil off the coast of San Diego, about four miles from Imperial Beach. Also in 2017, the Navy spilled 94,000 gallons of jet fuel at Naval Station Oceana in Virginia, killing wildlife, disrupting traffic, and causing health issues in local neighborhoods. The Coast Guard supported both responses. These examples show how difficult it is for the Navy’s few FOSCRs worldwide to handle disasters while maintaining all the Navy’s preventive requirements—but the Coast Guard can help.

The Coast Guard should take over all FOSCR requirements for the Navy, and even for all of DoD. Precedent for this type of relationship has already been set. The Coast Guard Port Security Units and Redeployment Assistance and Inspection Detachment (RAID) Teams demonstrate how a Coast Guard unit, with budgetary support from DoD, can not only assist, but ultimately integrate into the Department of Defense.  Conversely, the Coast Guard should consider moving the emergency response support function of SERT to the Navy and allowing the Navy’s salvage experts, who possess the right equipment and resources, to handle all salvage operations for both sea-going services. This would consolidate the requisite experts into single teams and eliminate duplication of efforts.

With concerted effort, the Coast Guard could relieve the Navy, and perhaps all of the Department of Defense, from its environmental protection and response duties. The Coast Guard brings a wealth of knowledge and expertise to this mission, as well as a large number of qualified and experienced personnel. Where the Navy and other DoD agencies are not resourced to react quickly to environmental problems, the Coast Guard can mobilize assets and resources within 24 hours domestically, and 48 hours worldwide. Coast Guard members already possess the required security clearances to access DoD installations, and the Coast Guard maintains contracts with spill-response contractors, ready to be enacted. The Coast Guard has everything needed to prevent, prepare for, and respond to environmental disasters, and can easily extend these capabilities to the Department of Defense. 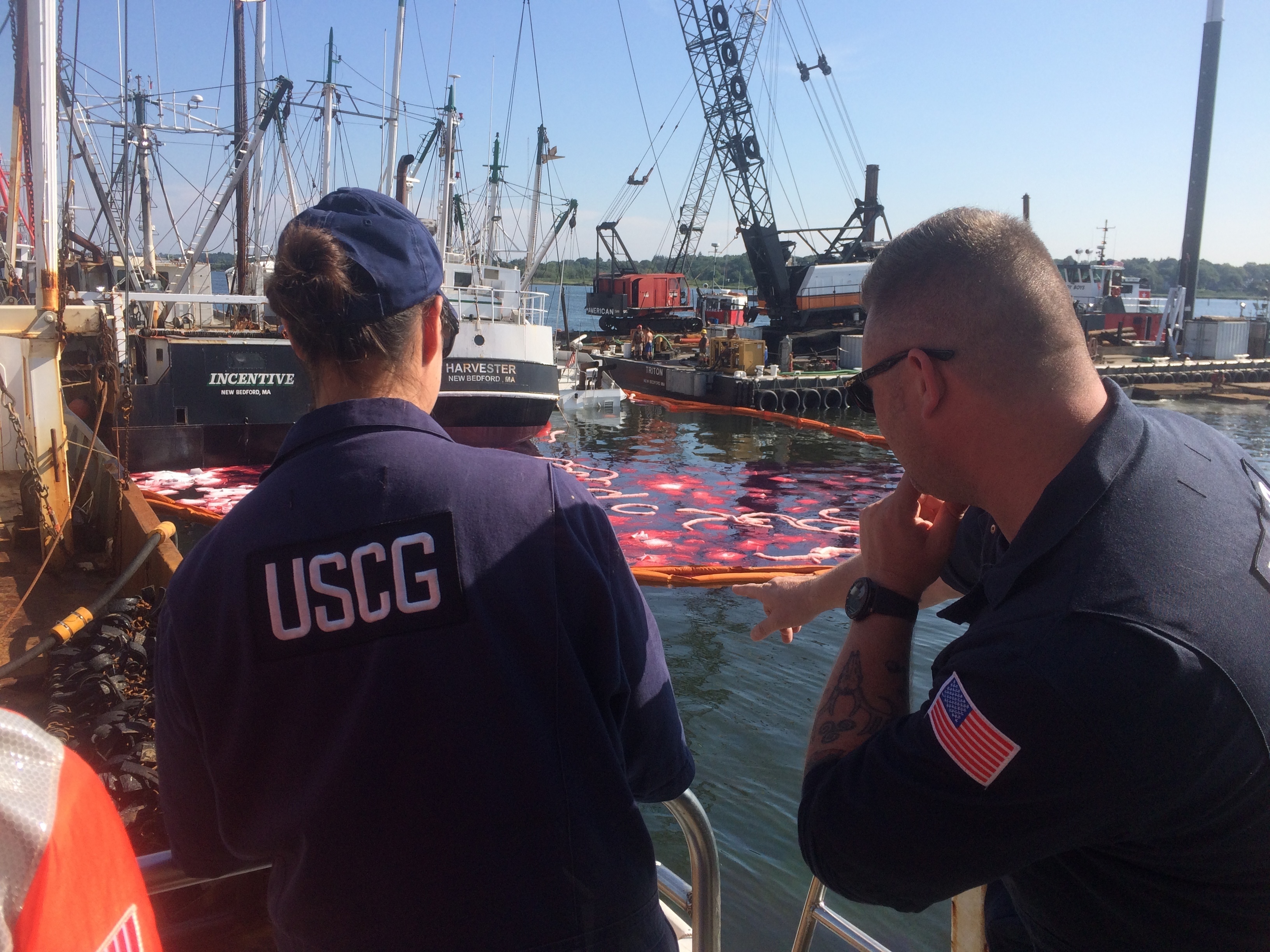 The Coast Guard has the people and the expertise to respond to environmental disasters.
U.S. Coast Guard (Lynn Schrayshuen)

Commander Russell has more than 15 years of experience in emergency management, both on active duty and as a civilian. She earned her accreditation as a Certified Emergency Manager in 2016. She is currently the Director of Emergency Management at the Pasco Sheriff’s Office in Florida.

Lieutenant Stevens is a reservist who lives in Richmond Hill, Georgia, and has served for nine years. His experience includes facility/container inspections, pollution response, maritime law enforcement, and incident management. During his time, he has been mobilized five times in support of hurricane response efforts.