During the 1920s and 1930s several large, graceful, rigid airships flew across the Atlantic and within the United States. Four
of them were emblazoned “U.S. Navy.”1

The Navy acquired five rigid airships that commonly were known as zeppelins, a term derived from the German firm of Graf von Zeppelin that had produced those craft in World War I. During the war, the German airships served as bombers to attack England and flew in support of fleet operations.

The first American “zep” was designated ZR-2. Built in England as the R-38, she experienced a structural failure during a test flight and was destroyed. The subsequent ZR-3—named Los Angeles—was built at the Zeppelin plant in Germany. Thus, the Shenandoah (ZR-1) was the first U.S.-built Navy airship. The subsequent U.S.-built Akron (ZRS-4) and Macon (ZRS-5) were intended as fleet scouts and carried aircraft to be launched and recovered while the airships were in flight.2 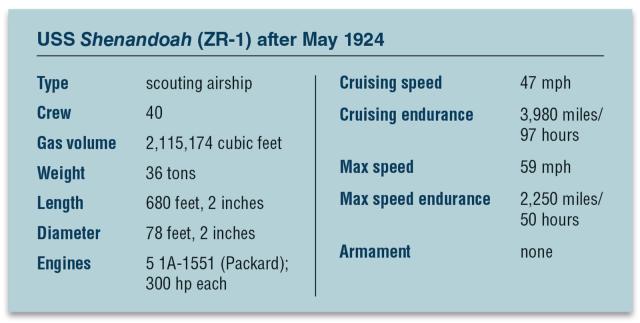 The Shenandoah design was based on the German L49 high-altitude airship bomber. That craft was captured intact by the Allies in 1917 after being forced down by French fighter planes.

Initially designed with a wooden structure to produce a “rigid” airship, that concept was abandoned for the Shenandoah in favor of an internal structure built of an alloy of aluminum and copper known as duralumin. The Shenandoah’s components were built at the new Naval Aircraft Factory in the Philadelphia Navy Yard, then transferred to Naval Air Station Lakehurst, New Jersey, where they were assembled in the only U.S. hangar that could accommodate the craft’s size. Her buoyancy was provided by helium, a nonflammable gas that replaced the highly dangerous hydrogen previously used in airships. However, helium was expensive and scarce, so instead of venting the gas to compensate for the weight of fuel consumed by the engines, the airship’s neutral buoyancy was maintained by capturing water vapor in the engine exhaust.

The Shenandoah’s first flight was on 4 September 1923, and she was placed in commission a month later. During the latter months of 1923 and early 1924 the airship made several flights over the Eastern United States, giving the American people their first view of a U.S. rigid airship while providing valuable training for her flight crew. In January 1924, she was severely damaged by high winds while at Lakehurst, with gusts up to 71½ miles-per-hour recorded at the top of her airship mooring mast. Repaired and overhauled, she returned to service in May. 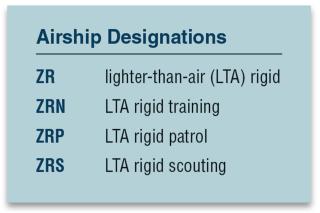 In August 1924, the airship conducted the first mooring to a ship, teamed with the oiler Patoka (AO-9). The ship had been fitted with an airship mooring mast some 125 feet above the water. The Patoka was provided additional accommodations for the Shenandoah’s crew and line handlers, as well as facilities for storing helium, aviation gasoline, and other supplies and provisions for handling and stowing three seaplanes. Those modifications, undertaken at the Norfolk Navy Yard, were completed in July 1924, and the first successful Shenandoah mooring to the ship was made on 8 August. It was believed to be the first time a rigid airship had moored to a surface ship. (At the time, the Patoka retained her oiler classification.3)

A trip to the Arctic to collect weather data and gain experience in cold weather operations was proposed—and approved by President Calvin Coolidge. But the airship was damaged in a gale, and that mission was canceled. Subsequently, the Chief of Naval Operations proposed a flight itinerary for the Shenandoah that included a West Coast transit, a flight out to Pearl Harbor, and operations with the Battle Fleet. In October 1924, the Shenandoah made a round-trip flight to the West Coast and briefly was based at San Diego, California. She did not reach Hawaii. The operation was considered a success, although it demonstrated the need for increased power and speed if airships were to operate over Pacific waters.

The Shenandoah was laid up on her return to Lakehurst in late October, thus making available scarce helium for use in the new airship Los Angeles. The older airship was not returned to flight status until June 1925. That summer the Shenandoah carried out tactical exercises with the fleet, her only actual employment with the Navy’s operating forces. Airship historians Douglas Robinson and Charles Keller lamented: “If only the Shenandoah had been involved in more such missions—in sight of the seagoing Navy—rather than the publicity flights over inland cities.”4

More East Coast flights followed with limited activities with the fleet. On 3 September 1925, on the first leg of a promotional flight from Lakehurst to the Midwest, the Shenandoah ran into thunderstorms and turbulence over southern Ohio. She broke up in flight and 14 of her crew were killed, including Commander Zachary Lansdowne, the airship’s commanding officer. There were 29 survivors.

Earlier Lansdowne had protested the flight because violent weather conditions were common in that area in late summer.

The first U.S.-built rigid airship was a total loss. Looters ravaged the wreckage for pieces of gas cell fabric, personal effects, instruments, logbooks and other documents, and even canned goods.

After the loss of the Shenandoah there were fewer publicity and “county fair” flights for the airships Akron, Los Angeles, and Macon; they were rarely seen inland and mainly operated “in the environment for which they were best suited—over the sea and coastal areas.”5

During her brief service life, the Shenandoah had made 59 flights, accumulating 740 hours of flight time.

3. The Patoka was reclassified as a seaplane tender (AV-6) on 11 October 1939, when supporting Scouting Force seaplanes; she was changed back to AO-9 on 19 June 1940. The ship served in a variety of roles during World War II; she was discarded in 1946.

A British Connection (Part I)

By Norman Polmar
The U.S. Navy had a close and unusual relationship with the Supermarine Spitfire, one of the outstanding fighter aircraft of World War II.
NH Historic Aircraft

The second major U.S. Navy encounter with the Spitfire occurred during preparations for D-Day—the invasion of the Normandy coast of German-held France on 6 June 1944.
NH Historic Aircraft

By Norman Polmar, Author, Ships and Aircraft of the U.S. Fleet
Nonrigid airships or “blimps” or “gas bags” were a major component of U.S. naval aviation during World War II and through the 1950s.