Skip to main content
A Royal Air Force Spitfire V takes off from the carrier USS Wasp (CV-7) during one of the carrier’s two “runs” to the island of Malta in the Mediterranean. The Spitfires were critical to the island’s survival against intensive German and Italian aerial assaults.
U.S. Navy

A British Connection (Part I)

The U.S. Navy had a close and unusual relationship with the Supermarine Spitfire, one of the outstanding fighter aircraft of World War II. British aviation historian Owen Thetford wrote:

The Spitfire has become a legend not only in the annals of the R.A.F., but also in world history. With the Hurricane, it brought victory in the Battle of Britain and afterwards demonstrated its superb qualities on every major battle-front.1

The Spitfire was designed by R. J. Mitchell, who was responsible for a series of outstanding racing seaplanes. The fighter began as a private venture and incorporated several advanced features, with the prototype flying on 5 March 1936. However, production difficulties delayed the aircraft entering service.

The start of World War II in Europe saw German and Italian naval and air forces quickly taking control of most of the Mediterranean area. The island of Malta in the center of the Mediterranean Sea was held by the British and was a vital base for aircraft and submarines attacking Axis forces in the area. By 1942, few British supply ships were able to get through to Malta with provisions and weapons for the civilian population and military forces.

Malta needed fighter aircraft to survive. German bombers on Sicily were striking the island almost daily, and without fighter protection, the submarines and bombers staged there would not be able to prey on the Axis convoys steaming between Italy and North Africa. Beginning in early 1942, British aircraft carriers attempted to deliver the new Spitfire fighters. But except for the fleet carrier Victorious, the available carriers were too small to carry a significant number of “Spits”—and even the Victorious’s elevators were too small to lower the Spitfires to her hangar deck. Three British carrier runs in March 1942 had delivered only 31 fighters.

In early April 1942, the carrier USS Wasp (CV-7) arrived at Scapa Flow at the northern tip of Scotland to operate with the British Home Fleet as part of U.S. Task Force 99.2 On 1 April 1942, British Prime Minister Winston Churchill asked President Franklin Roosevelt for “loan” of the Wasp to make the Malta run. The loan was approved, and the carrier sailed to Glasgow, where she was wildly cheered by crowds along the riverbank. The U.S. flattop sent some of her aircraft ashore and took on board 47 Spitfire fighters and their Royal Air Force (RAF) pilots. 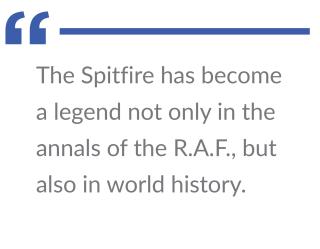 As many Spitfires as possible were lowered into her hangar, with the Wasp’s own F4F-4 Wildcats held on deck. The carrier sailed on 14 April, escorted by a British battle cruiser and four British and two U.S. destroyers; two British antiaircraft cruisers joined later. The ships—designated Force W—passed through the Strait of Gibraltar in the early hours of 19 April, using darkness as a shield against observation by German agents on the Spanish coast.

At 0400 the following morning the Wasp began launching aircraft. First, 11 of her Wildcats took to the air on combat air patrol. Then the Spitfires, which had warmed up in the hangar, came up by the after elevator with their engines running. As the lift met the flight deck the planes taxied forward and immediately took off. In a precision operation the Wasp flew off her 11 fighters and the 47 Spitfires in 61 minutes. There was one casualty during the launch: an RAF sergeant on the flight deck was killed when he was struck by a propeller.

Once the Spitfires were airborne, the ships turned west, shadowed intermittently by enemy aircraft. Forty-six Spits arrived safely on Malta. The Germans attacked Malta’s airfield soon after the planes completed their 550-mile flight from the Wasp. Some 40 enemy aircraft were shot down during the raid, but one-half of the newly arrived Spitfires were destroyed.

Another Malta run was needed, and the Wasp once more was made available. On 30 April the Wasp steamed into Glasgow to load another 47 Spitfires. The carrier then sailed south, again joining Force W, which consisted of a battle cruiser, an antiaircraft cruiser, and 11 destroyers. During the night of 7–8 May, HMS Eagle joined the force off Gibraltar. The British carrier—named for the American Eagle in tribute to U.S. participation in World War I—carried 17 additional Spitfires for Malta.

At 0630 on 9 May, the Wasp again launched 11 F4F Wildcats to patrol over the carriers. One Wildcat crashed on takeoff. At 0643 the first Spitfires roared down the carrier’s flight deck. One immediately lost power because of improper propeller pitch setting and plunged into the sea. Both the pilot and aircraft were lost.

The remaining 46 Spits took off from the Wasp without incident, while 17 were launched from the nearby Eagle. However, one Spitfire pilot encountered problems with his auxiliary fuel tank and turned back toward the Wasp. After an exchange of signals, he attempted to land—without an arresting hook—on board the U.S. carrier. The pilot’s first landing attempt was too high; he touched down on his second, cut his engine, and, standing on the brake pedals, stopped a few feet from the forward edge of the flight deck. The pilot requested permission to fit another tank and take off but was denied. Sixty of the Spitfires from the two carriers reached Malta. (Two collided over Malta.)

As the Spitfires landed they were quickly serviced, and all were back in the air within minutes of arrival on the island. In the air battle that followed, three Spitfires were lost; the Germans lost 37 aircraft. On the following day, 60 more German planes were reported to have been destroyed over Malta.

The Wasp returned to Scapa Flow, where she recovered the aircraft she had sent ashore to make space for the Spitfires. Three days later, she departed for the United States and then on to the Pacific, where she gave her all in the battle for Guadalcanal. Her efforts in the Mediterranean helped save Malta. Churchill, in one of his characteristic messages, thanked the Wasp, signaling, “Who said a wasp couldn’t sting twice?”3

By Norman Polmar, Author, Ships and Aircraft of the U.S. Fleet
The first U.S. Navy fighter to go to sea was a variant of the French-built Hanriot HD-2 floatplane.
NH Historic Aircraft

By Norman Polmar
The Curtiss JN biplane—invariably known as the Jenny—was the most widely flown U.S. Army training aircraft in World War I.
NH Historic Aircraft

By Norman Polmar, Author, Ships and Aircraft of the U.S. Fleet
While not as popular or well known as other maritime patrol aircraft of the World War II era, the Lockheed Venturas and Harpoons made a significant contribution.