Skip to main content
A Hanriot biplane fighter stands ready on a ramp atop a forward 14-inch gun turret of the battleship Texas (BB-35).
U.S. Navy

The first U.S. Navy fighter to go to sea was a variant of the French-built Hanriot HD-2 floatplane. The Hanriot was a one-seat, single-engine, twin-float, biplane fighter that was noted for being rugged, maneuverable, and easy to fly. A small number were assigned to French warships. In addition, 125 were built for Belgium and 831 for Italy, most built under license at Varese in northern Italy. 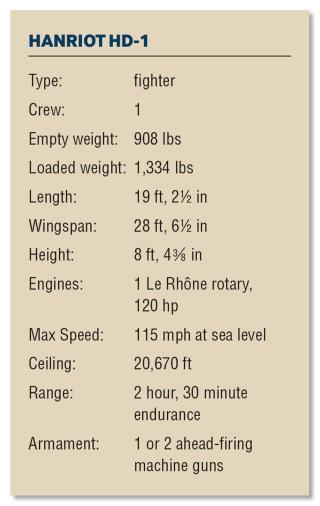 The U.S. Navy acquired 26 of the aircraft for use in European coastal operations during World War I. After the war, ten of the aircraft were shipped to the Naval Aircraft Factory in Philadelphia for conversion to landplanes. In front of their new wheeled undercarriages they were fitted with a hydrovane for stability in possible emergency water landings.1

In March 1919, the Navy began flying the fighters from wood platforms built over the forward main battery turrets of eight battleships. That effort began 17 months after the Royal Navy initiated similar operations.

But it wasn’t easy. The effectiveness of the airplanes operating with the fleet in this 1919–1920 period was severely restricted by their configuration. They had to stay within range of shore bases. However, provision was made for emergency landings at sea. A flotation system developed in England during World War One was used to keep downed planes afloat. It consisted of two bags inflated by compressed air.2

For several reasons, the era of Hanriot fighters on board U.S. battleships was brief. Soon they were succeeded by floatplanes, launched by catapult, that could be recovered after a water landing alongside the battleship or cruiser. However, those floatplanes were suitable only for scouting, gunfire spotting, and rescue—all important roles—but they were not fighters.

Thus, the Hanriot HD-2 was the only fighter aircraft taken to sea by the U.S. Navy until the 1920s, when aircraft carriers began to join the fleet.

1. The Naval Aircraft Factory was established in 1918.

By Norman Polmar
The Curtiss JN biplane—invariably known as the Jenny—was the most widely flown U.S. Army training aircraft in World War I.
NH Historic Aircraft

By Norman Polmar, Author, Ships and Aircraft of the U.S. Fleet
While not as popular or well known as other maritime patrol aircraft of the World War II era, the Lockheed Venturas and Harpoons made a significant contribution.
NH Historic Aircraft

The Advantages of ‘Tilting’

By Norman Polmar, Author, Ships and Aircraft of the U.S. Fleet
The history of tilting rotor technology.