Born in Valmeyer, Illinois, in 1930, Trost entered the U.S. Naval Academy in 1949. He was commissioned an ensign in 1953, graduating first in his class. He reported to the destroyer USS Robert A. Owens (DDE-827) and in 1954 was detached to attend the Submarine School, New London, Connecticut. In 1955 he reported to the diesel submarine USS Sirago (SS-485), where he qualified as a submariner in 1956. In 1957 he attended the Advanced Nuclear Power course at the Submarine Base, New London, Connecticut, followed by training at the Naval Nuclear Power Training Unit, Idaho Falls, Idaho.

In 1957 Trost reported to the nuclear-powered attack submarine USS Swordfish (SSN-579) and in 1959 qualified to command submarines. He studied German at the Army Language School, Monterey, California, in 1960 and then reported to the University of Freiburg, Federal Republic of Germany, serving until 1962, when he reported as executive officer of the nuclear-powered attack submarine USS Scorpion (SSN-589).

In 1963 Trost attended the Polaris command course at the Fleet Anti-Air Warfare Training Center, Dan Neck, Virginia. He then reported as executive officer of the Blue crew of the nuclear-powered ballistic missile submarine USS Von Steuben (SSBN-632). In 1965 he reported as military assistant to the Deputy Secretary of Defense, Washington, D.C.

In 1968 Trost assumed command of the Blue crew of the nuclear-powered ballistic missile submarine USS Sam Rayburn (SSBN-635). In 1969 he was assigned as Assistant Chief of Staff for Personnel and Administration on the staff of Commander Submarine Force, U.S. Atlantic Fleet. He reported in 1970 as executive assistant and naval aide to the Under Secretary of the Navy, and later Secretary of the Navy, John W. Warner. In 1973, his selection to flag rank was approved by the President. Trost assumed command of Submarine Flotilla One (later renamed Submarine Group Five) in San Diego, California, with additional duties as Commander Submarine Force Pacific Representative, West Coast.

Trost reported to the Bureau of Naval Personnel as the Assistant Chief for Officer Development and Distribution In 1974, and in 1976 was assigned to the Office of the Chief of Naval Operations as Director, Systems Analysis Division, OP-96. In 1978, he was promoted to vice admiral and reported as Deputy Commander in Chief, U.S. Pacific Fleet, Pearl Harbor, Hawaii.

In 1980, Admiral Trost assumed command of the U.S. Seventh Fleet and served in that position until 1981. For his service he was awarded the Government of Japan’s Order of the Rising Sun (Second Class) and the Republic of Korea’s Order of National Merit. His next assignment was as Director, Navy Program Planning, OP-090, on the staff of the Chief of Naval Operations. In 1985 he was promoted to the rank of four-star admiral and became Commander in Chief U.S. Atlantic Fleet and Deputy Commander in Chief U.S. Atlantic Command.

Admiral Trost served as Chief of Naval Operations from 1986 to 1990.

In this excerpt from his oral history, Admiral Carlisle A. H. Trost discusses his relationship with Admiral Paul A. Yost Jr. while Trost served as Chief of Naval Operations and Yost as Commandant of the Coast Guard. 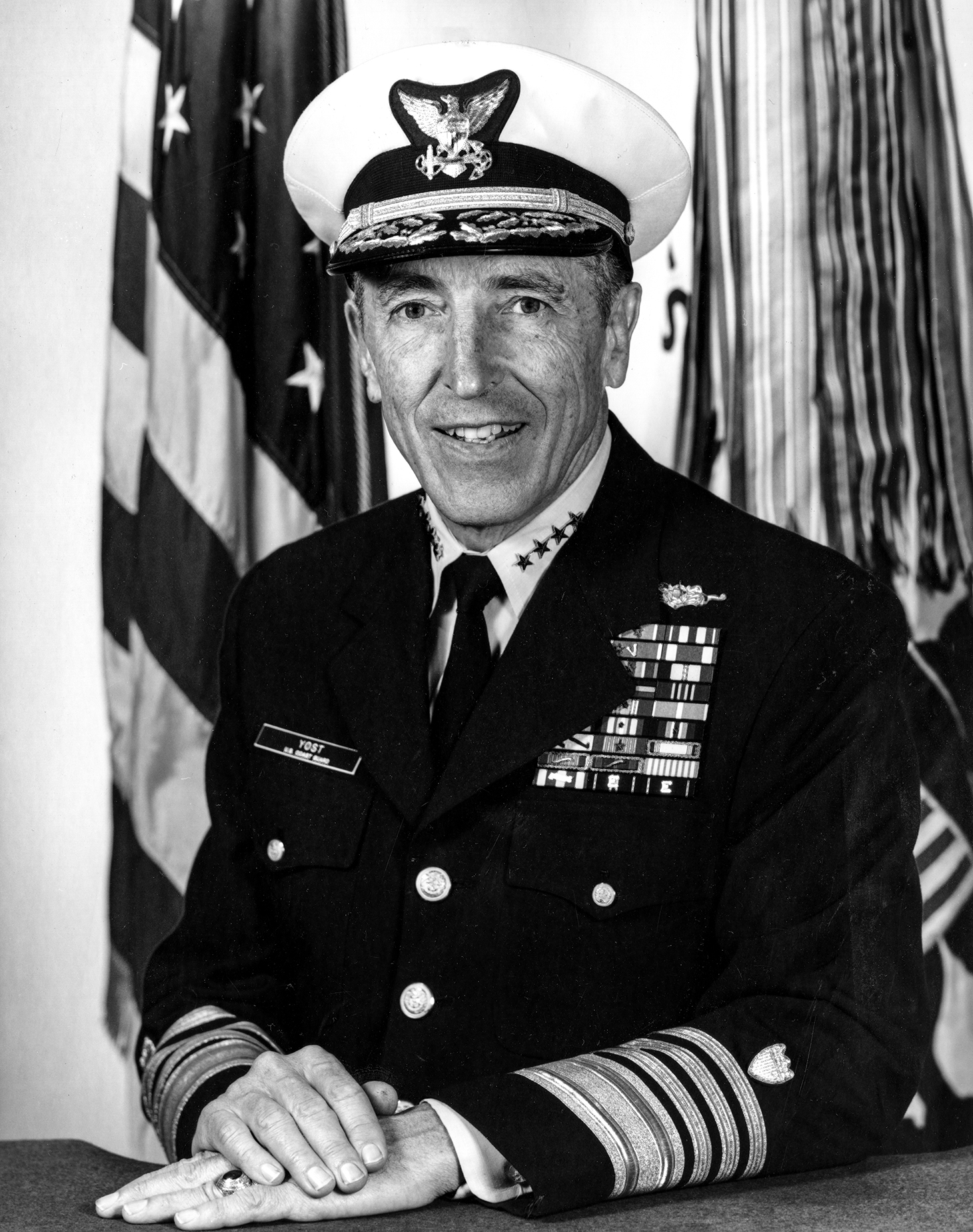 Paul Stillwell: On a substantive side, the Coast Guard Chief of Staff then was Admiral Paul Yost, later Commandant.[1] In his oral history he characterized the relationship between the two of you as sort of a zero-sum game on funds. He said he thought that you were wary of him, that he was trying to pick your pocket.

Admiral Trost: He was. [Laughter] He was. Paul and I were good friends, but Paul would testify—and he used the Yost-Trost name-alike to confuse people. This was primarily later, when he was Commandant. He wanted more support. The Navy supports a lot of stuff for the Coast Guard. The military capabilities of a Coast Guard cutter are paid for by the Navy. He was constantly trying to parlay that into other things, using that as the basis for his requests, and on occasion he’d kind of fuzz Trost and Yost as saying, “Trost approves this.” It was Yost who brought it up, and it was Yost who approved it, and he got caught a couple times. So we had sort of a friendly, confrontational relationship in some respects.

Paul Stillwell: I imagine he won some and you won some.

Admiral Trost: He won a few that he got behind my back.

Paul Stillwell: What would be examples?

Admiral Trost: Well, examples would be support funding for certain of his ships, which weren’t my responsibility to support, and he’d get money transferred from my operations or maintenance funds by the staffers on the Hill, and especially in the House Armed Services Committee. I accused him of a lot of cock and bull that he fed them in order to get the money transferred over. And these guys were not necessarily as conversant with what the division of funds was as I was, because I’d been 090 and I knew what he got and what he was supposed to have from my budget and what he shouldn’t have. He won a few of those.

Paul Stillwell: Well, the comparative budgets were so disproportionate . . .

Admiral Trost: Oh, they were.

Paul Stillwell: . . . he had to scratch for whatever he got.

Admiral Trost: And he was not getting support from the Department of Transportation that he should have. It was a low-priority thing.

Paul Stillwell: That seemed to be perpetually the case with the Coast Guard up till 9/11.[2]

Admiral Trost: It has been. It has been. And I’m not sure it still doesn’t persist to a degree, because we need icebreakers, we need to repair old icebreakers, and we’re not putting the money into it. That’s a national disgrace, I think. Of course, when the ice coverage in the north receded, that was used as an argument against more funding for the Coast Guard. “You don’t need as many icebreakers.” That, I think, is a national disgrace. It’s a fatal oversight for the future.

Paul Stillwell: There was a story on “NBC News” a couple weeks ago pointing out how few icebreakers the U.S. has and how many Russia has.

Admiral Trost: Yeah, the Russians have an awful lot. Of course, the Russians have a greater need from the standpoint of strategic use because they have a lot of those northern ports which are not ice-free year around, so they use their icebreakers more heavily for local commerce than we do. But we still have a need.

[2] On 11 September 2001 terrorists hijacked commercial airliners and crashed them into the twin towers of the World Trade Center in New York City and the Pentagon in Arlington, Virginia.

Based on 13 interviews conducted by Paul Stillwell from July 1991 through June 2017, the volume contains 692 pages of interview transcript plus an index. The transcript is copyright 2018 by the U.S. Naval Institute; the interviewee has placed no restrictions on its use.