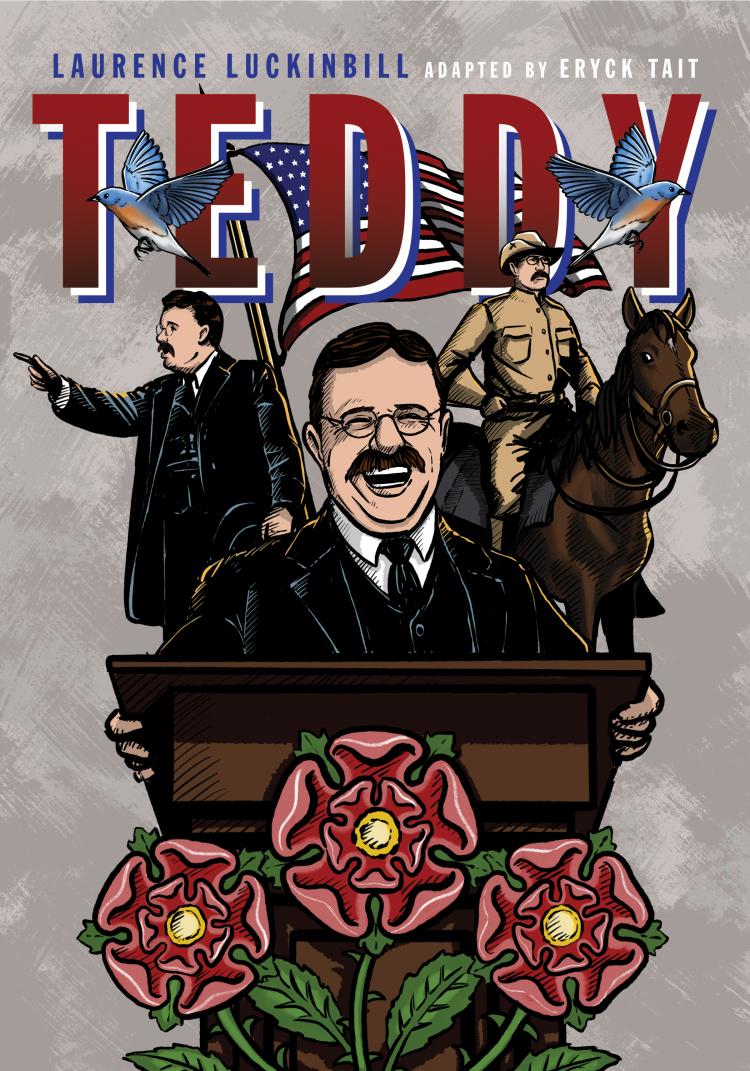 July 1918. Preparing to speak to an eager audience, 61-year-old Teddy Roosevelt receives the telegram that all parents of children who serve in war fear most: His son Quentin’s plane has been shot down in a dogfight over France. His fate is unknown. Despite rising fear for his youngest son, Teddy takes the stage to speak to his beloved fellow citizens. It is, he says, “my simple duty.” But the speech evolves from politics and the war, into an examination of his life, the choices he’s made, and the costs of his “Warrior Philosophy.”

Overflowing with his love of nature, adventure, and justice, Teddy dramatically illustrates the life of one of America’s greatest presidents. His many accomplishments ranged from charging up San Juan Hill in Cuba as commander of the Rough Riders, to facing down U.S. corporate monopolies, to launching the Great White Fleet, building the Panama Canal, and the preservation of hundreds of millions of acres of natural American beauty.  And finally, to the vigorous life at Sagamore Hill and his immense pride in a beloved and rambunctious family. Teddy reveals how even the greatest of men is still just a man, and how even the most modest man can grow to be great.

Laurence Luckinbill, is a renowned actor, playwright, and director who has worked in television, film, and theater for decades. Well known as Spock’s brother Sybok in Star Trek V: The Final Frontier, Laurence is an Emmy winning, Tony Award-nominated actor who has toured the country in acclaimed solo plays depicting the lives of Lyndon Johnson, Clarence Darrow, Teddy Roosevelt, and Ernest Hemingway. He has five children and lives in California with his wife, Lucie Arnaz.

Eryck Tait is a Brooklyn based illustrator and designer. He works primarily in storyboarding and concept art for advertising as well as freelance illustration and fabrication. He is currently the Manager of Illustration for Ogilvy in Manhattan and resides in Bushwick with his wife, three cats, and one terrible dog.

“Covering both Roosevelt’s formative years and his achievements in the White House, and summarizing the politics of his time, Teddy is an excellent graphic biography that serves as a compelling reminder of why Theodore Roosevelt is considered one of the greatest U.S. presidents.” —Foreword Reviews

“Laurence Luckinbill has long breathed life into Theodore Roosevelt as an instrument for good via his one-man play. Now he’s whittled his complicated character to its two-dimensional essence. Larry says, like the Declaration of Independence, TR's 'peculiar importance' derives not from what America was, but from what it would become.” —Bruce Fessier, history instructor at Desert Institute at Joshua Tree National Park, long-time writer for The Desert Sun and USA Today

“A master storyteller of stage and screen, Laurence Luckinbill brings his remarkable abilities to bringing the lively Theodore Roosevelt back to life in this compelling graphic novel. The 29th President leaps from every page making the reader wish not only that Teddy was a little longer but that we had someone as energetic, irrepressible, and virtuous in the arena today.” —Mark K. Updegrove, President & CEO of the LBJ Foundation and author of The Last Republicans: Inside the Extraordinary Relationship Between George H.W. Bush and George W. Bush

“Roosevelt was a force of nature and a force of a deeply moral, but loving man and this is an excellent introduction to a President and Presidency that is still remarkable today.” —Sequential Tart

“This is a biography of Teddy Roosevelt that is narrated by Roosevelt himself, as if he were giving a lecture, with a lot of flashbacks. This makes for a coherent story, in which Roosevelt tells us what’s important to him and why, with some reflections in retrospect. A lot of graphic biographies jump around from scene to scene with little to hold it together or tell the big story so it’s nice to read one that hangs together so well. The art is simple, with thick lines and a monochrome palette which suits the subject matter well.” —Smash Pages

“Teddy Roosevelt roars, fumes, and looks back on his life and family in this graphic version of Luckinbill’s one-man stage show Teddy Tonight.... It’s a vivid picture of Teddy at his most admirable…and prescient.” —Kirkus Reviews

“Imagine what this book alone ... could do within classrooms…. Graphic novels such as Teddy could create a spark for learning thanks to presenting history through the unlimited potential in the medium that is comics instead of a beaten up textbook that has been signed out to kids for the last 20 years.” —Masked Library

“Teddy is a fantastic book for anyone who is curious about Teddy Roosevelt but isn't sure where to start. Luckinbill's writing and Tait's artwork combine beautifully to result in a stellar overview of a President who left a complex legacy of both immense accomplishments and all too human failings. 5 out of 5 stars.” —The Newest Rant

“Extremely accessible to younger readers, as well as more advanced readers alike, which is such an awesome thing.” —TheGlitteryBookworm_

“Teddy is a personal look into probably the most iconic President to have ever held the office. The story by Luckinbill is extraordinary. The art by Tait is awe-inspiring. Altogether, Teddy is a graphic novel that makes this important historical figure both relatable and relevant.” —Graphic Policy

“The storytelling is remarkable…. I absolutely loved the story here, and despite being skeptical of the format initially, it works very well. The art style, minimalist with blacks and blues, is great and not something you see too often. I’d love to see more of these made from other well-known speeches in the future. This is honestly a great book, as one could toss this into a school library or assign it as a class project, and I think kids would really gain a bit of extra understanding that merely just reading a speech or textbook does not allow. Definitely recommended!” —Arcadia Pod

“By anyone’s standards, this is a remarkable book, and while this is quite suitable for high school students, it can certainly be enjoyed by fans of history, theater and graphic novels in general…. Eryck Tait has done an admirable job of following Luckinbill’s script. It’s a highly economical and functional style, clear and crisp…. Given that this book is a byproduct of the theater and of comics, you say can you’re getting the best of both worlds.” —Comics Grinder

“I highly recommend Teddy as an interesting and engaging work on the life of Theodore Roosevelt.... Though I have read several biographies about Theodore Roosevelt, I enjoyed how Teddy presented the life of Roosevelt, not just as a great man, but also showed the human side of him that illustrates why he did what he did. Teddy is great for both young people and adults alike.” —GeekDad

“This was a really fun graphic novel to read…. Fans of this president may want to read this graphic novel.” —The Good Men Project

“An interesting, informative, and a short read that is well suited for younger readers wanting to know more about ‘Teddy'.” —Australian Naval Institute

“I highly recommend Teddy by Laurence Lukinbill, adapted by Eryck Tait. It is a fast-moving and informative look at the life of Theodore Roosevelt. I would recommend it to anyone who likes Roosevelt or wants to learn more about the man.” —Being a Big Sandwich

“A graphic novel that leads us to learn about the life and political and human history of one of the greatest presidents in American history: Theodore Roosevelt.” —On the Old Barbed Wire

“In their appealing young adult graphic novel, Luckinbill and Tait present the facts of President Theodore Roosevelt’s life in compact form, while conveying the spirit of the man and the times…. Readers will find the book an excellent introduction to a fascinating president. Tait’s illustrations are superb.” —Historical Novel Society

“The story is compelling and will attract readers and keep them turning pages. The time jumps are clear and not confusing, making this a great choice for reports for struggling students. The comic format makes the book an easy sell and kids will learn as they are entertained, thinking they are reading for their own enjoyment. ….[T]he illustrations are highlighted in slate-blue and have a super-hero vibe to them….. A great book that will appeal to a variety of readers who will be challenged with the question, ‘what do I stand for?’” —KateOnKidsBooks