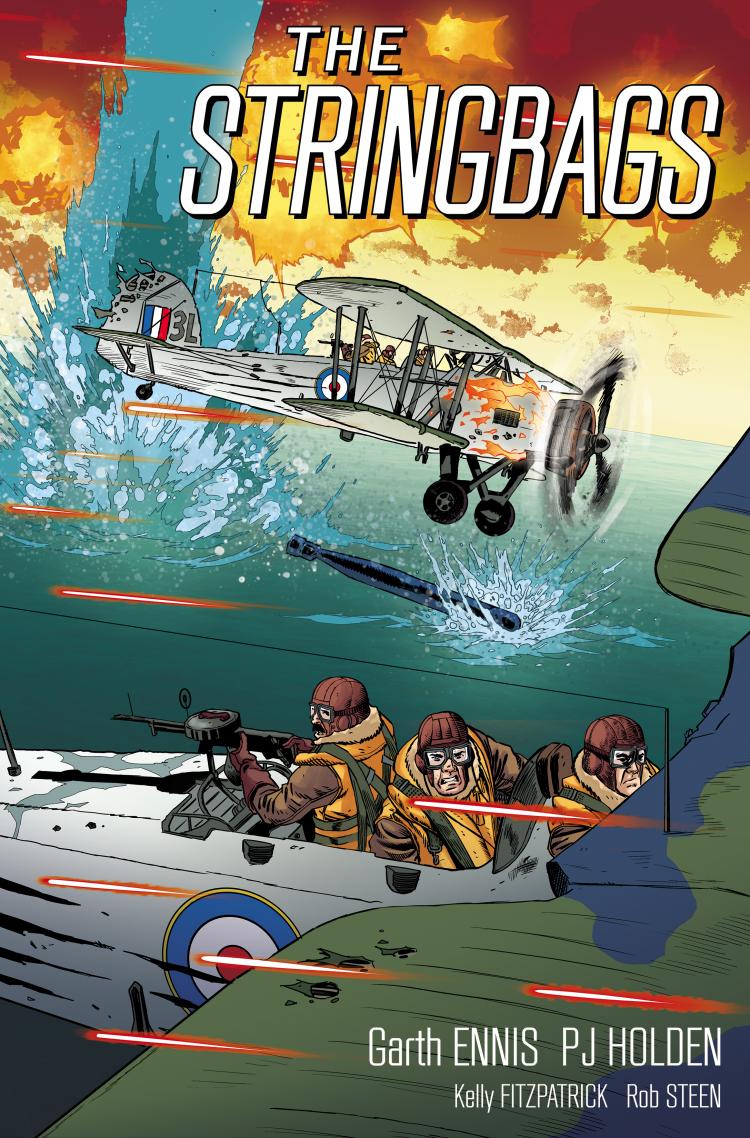 If you do the incredible often enough, they’ll want you to do the impossible.

Nazi Germany, Imperial Japan, and Fascist Italy began World War II with aircraft that could devastate enemy warships and merchantmen at will. Britain’s Royal Navy squadrons went to war equipped with the Fairey Swordfish. A biplane torpedo bomber in an age of monoplanes, the Swordfish was underpowered and undergunned; an obsolete museum piece, an embarrassment. Its crews fully expected to be shot from the skies. Instead, they flew the ancient “Stringbag” into legend.

Writer Garth Ennis (Preacher, The Boys, War Stories) and artist PJ Holden (Battlefields, World of Tanks: Citadel) present the story of the men who crewed the Swordfish: from their triumphs against the Italian Fleet at Taranto and the mighty German battleship Bismarck in the Atlantic, to the deadly challenge of the Channel Dash in the bleak winter waters of their homeland. They lived as they flew, without a second to lose—and the greatest tributes to their courage would come from the enemy who strove to kill them.

Based on the true story of the Royal Navy’s Swordfish crews, The Stringbags is an epic tale of young men facing death in an aircraft almost out of time.

Garth Ennis has been writing comics since 1989. Credits include Preacher, The Boys (both adapted for TV), Hitman and successful runs on The Punisher and Fury for Marvel Comics. He is particularly known for his war comics, including War Stories, Battlefields, Out of the Blue, Sara, and a recent revival of the classic British series Johnny Red. Originally from Northern Ireland, Ennis now lives in New York City with his wife, Ruth.

PJ Holden is a Belfast-based comic artist. Best known for his work for 2000AD on Judge Dredd, over the last twenty years he�s also drawn Rogue Trooper, Robocop/Terminator, James Bond: M, World of Tanks, and Battlefields. He is the co-creator of Dept. of Monsterology and Numbercruncher. He is married to Annette and has two children, Thomas and Nathan.

Kelly Fitzpatrick is a Hugo nominated comic book colorist and illustrator. She has worked on everything from Kickstarter and indie publications to DC graphic novels. Kelly spends all of her free time doting on her dog, Archie as well as training dogs, doing yoga and aerial acrobatics, and self-publishing her own books.

Rob Steen has lettered books for most major comic companies. He is also the illustrator of the Flanimals children’s book series written by Ricky Gervais, and the children’s book Erf, written by Garth Ennis. His latest book is The Pod.

“A reserve crew in a hopelessly outdated biplane attacking the might of a battleship convoy in the early days of World War Two. The Stringbags is, like the best well-researched military history, delivered with genuine heart— something Garth Ennis excels at. A gripping underdog tale filled with spectacle and tragedy, featuring career-best art from PJ Holden.” —Rob Williams, author of Judge Dredd and Unfollow

“The Stringbags artfully meshes fiction into a factual narrative, bringing to life the story of an oft-overlooked combat force in WW2. An entertaining read, even to those who are already aware of the Swordfish’s wartime feats” —Nick Moran, AKA “The Chieftain”

“The art of storytelling lies in drawing readers in, making them hungry to know what comes next. The Stringbags has that in abundance. Intending merely to take an exploratory glance, I couldn’t stop reading. A fascinating, engaging and well-researched script that you’d expect from Garth Ennis augmented by admirably clear and atmospheric art from PJ Holden, beautifully coloured by Kelly Fitzpatrick. Highly recommended for lovers of damn good stories.” —John Wagner, co-creator of Judge Dredd and Strontium Dog

“The Stringbags is even better than I’d hoped…. Each part of Stringbags has text exposition, giving historical context, sometimes bridging between scenes; it’s great text too. Ennis writes history with a mix of enthusiasm and flair—he takes it seriously, explaining his creative choices with facts in the afterword (because he too seems to recognize the potential of the project)—so even as you wait to find out what’s happening to the heroes, you don’t really want the lecture to end. Ennis is concise and fact-filled, with an intention of making those facts count not fill…. It’s fiction with straight non-fiction tangents. It’s awesome.” —The Stop Button

“I really enjoyed the artwork in The Stringbags…. It was a delight to read all the way through. If you’re a fan of Garth Ennis or if you’re simply a war history buff, I highly recommend you pick up this graphic novel!” —CoolComicReviews.com

“The Stringbags is absolutely stunning. Stitching together Taranto, the Bismarck and the Channel Dash together through the experience of a single crew was a masterstroke. And the art is awesomely good. Gorgeous. It really is a hell of a book.” —Rowland White, author of Into the Black and Harrier 809

“The story is divided into sections based on three major actions in which the planes participated; Archie, Ollie, and Pops are involved in each. The action culminates in an attack on the German battleship Bismarck that evokes an emotional reaction on behalf of the trio and the war’s real-life combatants. While its story is sympathetic and exciting, the book also contains fascinating details related to military equipment, strategy, and tactics, and its sense of history is satisfying. The art renders the uniforms, airplanes, and weaponry of the time with accuracy. Battle scenes are visceral and heart-pounding, showing the horror and confusion of war. An afterword separates the book’s facts from its fictions, explaining the creative liberties that were taken with the story. The Stringbags is a triumphant graphic novel about World War II heroism.” —Foreword Reviews

“The Stringbags is Garth Ennis doing what he does best–telling in-depth war stories full of historical detail along with some fiction. P.J. Holden provides some fantastic art as well and the whole book is a lovely read. 5 out of 5 stars.” —The Newest Rant

“This may be the best war comic to come out in years.” —ICv2

“I recommend this book if you are into any WWII history – especially focusing on English or flight warfare in general. This story brings you right into the action and portions of the lives of the aircrews and their superiors. Go to your local comic book store and order a copy of The Stringbags today!” —Sequential Tart

“This well-written and beautifully-illustrated graphic novel tells of the courageous exploits of ‘Stringbaggers’ in the triumph against the Italian fleet at Taranto, against the mighty German battleship Bismarck in the war for the North Atlantic to the deadly challenge of the Channel Dash as Germany tried to sneak a fleet through the English Channel to Norway.” —On the Bookshelf with Doc Kirby

“The Stringbags – biplanes flying through WWII, underpowered, undergunned, whose crews never expected to become heroes in a plane that was never expected to become the stuff of legends. Garth Ennis and PJ Holden‘s Stringbags takes three of the most famous missions and ties it all together through the exploits of a trio of fictional Navy airmen – Ennis is on top form doing what he loves and Holden delivers career highlight artwork.” —Comicon

“This is a wonderful book in a format that can easily be read and understood by younger generations.” —Navy Wings Heritage Trust