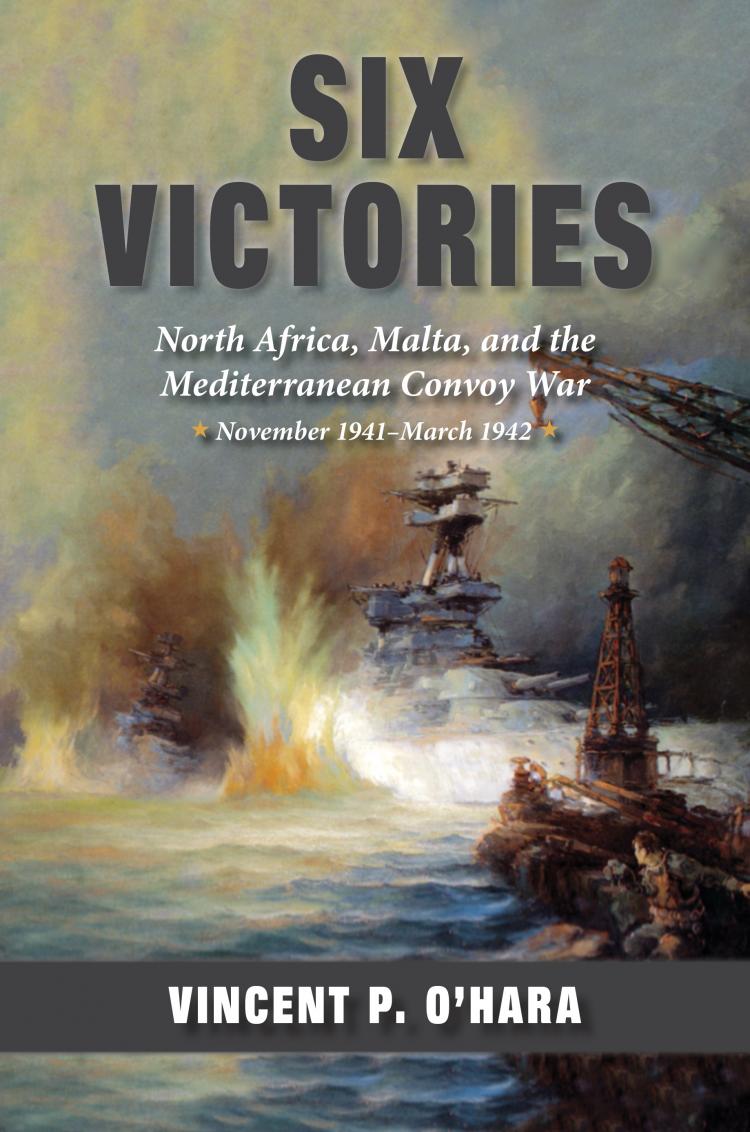 Six Victories examines one of the most interesting and instructive naval campaigns of World War II: the war on traffic in the Mediterranean during the fall and winter of 1941-42. It is a cautionary tale of how sea power was practiced, and how it shifted 180 degrees overnight. Based on British and Italian archival sources, the book emphasizes strategic context, the role of intelligence, and the campaign's logistics.

In October 1941 the British Admiralty based a surface strike force in Malta to attack Axis sea lanes between Italy and Africa. Aided by Ultra intelligence, submarines, and bombers based in Malta, this force dominated the Central Mediterranean. From the end of October through the middle of December 1941, less than a third of the supplies shipped from Italian ports arrived in Libya. Shortages of ammunition and fuel finally compelled the Afrika Korps to retreat four hundred miles. Then, in the space of thirty hours, this all changed. First, Italian naval forces broke the blockade by fighting through a major convoy that arrived in time to blunt the British advance; next, the strike force plowed into a minefield laid by Italian cruisers; and finally, in a daring attack, Italian commandos crippled the Mediterranean Fleet's battleships in port. The swing in fortune was immediate and dramatic.

Six Victories breaks new ground in the historiography of World War II. A compelling story, it relates lessons that are relevant today and should be required reading for all who practice the art of power at sea and for those who want to understand the intricate and interrelated factors that are the foundations of military success.

Vincent P. O'Hara is an independent scholar and the author of nine works including five published by the Naval Institute Press, most recently To Crown the Waves. His articles have appeared in the Naval War College Review, Warship, MHQ, Storia Militare, and other periodicals and journals. O'Hara was named Naval Institute Press Author of the Year for 2015. He holds a history degree from the University of California, Berkeley.

"O'Hara's book is not just a well-written history, it illuminates the enduring objectives, principles and risks that would be part of future naval convoy warfare.  Despite advances in technology, if the United States is someday forced by circumstances to convoy material to a besiged Taiwan, it will encounter issues and dilemmas similar to those described by O'Hara."  --Sam J. Tangredi, CAPT USN (Ret.), Leidos Chair of Future Warfare Studies and Director, Institute for Future Warfare Studies, U.S. Naval War College

This highly-readable work is a gold mine of new information from British and Italian archives. Its integration of operations and intelligence shows the hardest fought period of the Mediterranean war at sea in a new and compelling light. –Enrico Cernuschi, author of Sea Power the Italian Way

"The author combines broad coverage of the Mediterranean naval war’s early years with detailed descriptions of naval actions to produce a broad and balanced analysis of the problems the Allied and Axis powers faced in their struggle for maritime supremacy. Six Victories is a masterful representation of detailed research and deserves to become the standard work on the subject." — John Roberts, Naval author and illustrator, former editor of the annual Warship, author of British Battlecruisers 1905 – 1920 and the Anatomy of the Ship Volumes on Hood and Dreadnought.

“Replete with excellent photographs, maps, tables and charts, this book is certainly very detailed but it is clear and easy to follow. Very valuable history.” —Ausmarine

“I recommend this book as adding a valuable perspective on naval operations in the Second World War and for giving the Italian Navy the credit it is due for a series of well-executed operations that deserve to be more widely understood.” —The Australian Naval Institute

“The well-organised content and discoveries of untouched details making O’Hara’s Six Victories is a scholar’s treasury for every naval and maritime Historian. The book provides us with a shed of light on further understanding the uniqueness of the Mediterranean region during the Second World War. He successfully achieved what he supposed to do with the book, and the experiences of sea power generated from this book are still worthy for the strategists and naval officers today.” —The Northern Mariner / Le marin du nord

“Six Victories is an excellent read for anyone with an interest in naval operations, and particularly the Mediterranean during World War II.” —StrategyPage

“This is an important work on the struggle for control of the Mediterranean and is recommended for specialists and general readers interested in World War II at sea.” —The Journal of Military History

“Six Victories offers an informative new slant on operations in the Med. during that critical period, and is recommended.” —The Naval Review

“Six Victories is an up close and personal look at the factors that led to triumph and reversal, told from the perspective of 'the hundreds of details that are the true fathers of victory.' This work is a significant contribution to the naval history of the Mediterranean theater of World War II and one that students of naval history will surely want on their shelf.” —Naval Historical Foundation

“Melvin G. Deaile's Always at War is a welcome addition to a growing literature about the early years of the United States Air Force (USAF) Strategic Air Command (SAC). Deaile (PhD, Univ. of North Carolina) is a retired USAF bomber pilot. Using archival resources at the Air Force Historical Research Agency and the National Archives, as well as oral histories and recollections by SAC veterans, he has written a compelling study of the challenges of creating and sustaining a premier fighting force dedicated to deterring war by maintaining high levels of readiness throughout the forty long years of the Cold War….  A superb historical study of the first US nuclear deterrent force, as well as a discerning meditation on the leadership and culture of high-reliability and high-performing military units.” —Michigan War Studies Review

“This is a very readable work offering a wealth of new information from British and Italian archives. The book is illustrated with a good ... selection of contemporary photographs. More importantly, there are some excellent maps of the major actions and a large number of tables, most notably showing the damage to supply ships on both sides. There is a broad and balanced analysis of the problems the Allied and Axis powers faced in their struggle for maritime supremacy. The book’s integration of operations, logistics, and intelligence with detailed descriptions of the many actions in these five months show the hardest-fought period of the Mediterranean war at sea in a different and persuasive light, clearly linking it to the land war in North Africa. Thoroughly recommended.” —The Mariner’s Mirror

“In Six Victories, Vincent O'Hara has made a most welcome and timely contribution to the history of the Second World War, which is being rewritten at the operational/tactical level in recent years.” —Michigan War Studies Review