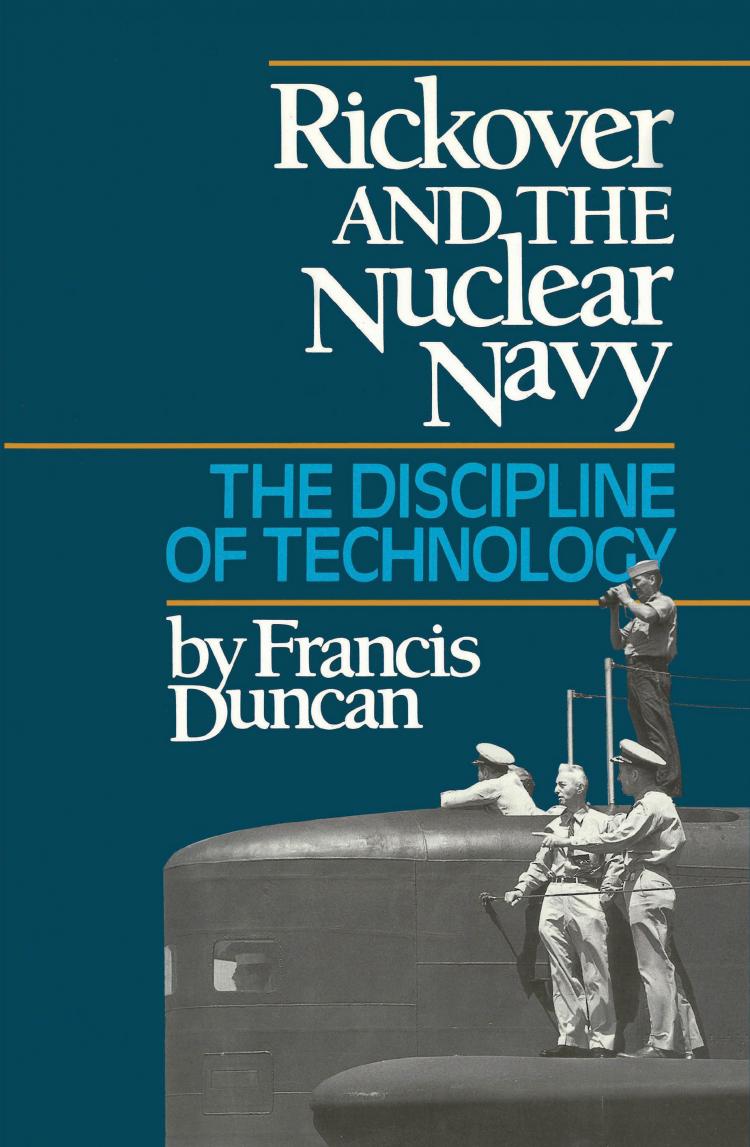 Rickover and the Nuclear Navy

The Discipline of Technology
By Francis Duncan
Hardcover $31.95
Member Price $25.56 Save 20%
Sign in to receive member pricing
Overview Author Reviews

No book will ever come closer than this to providing an inside overview of Admiral Hyman G. Rickover’s nuclear propulsion program. The author, an Atomic Energy Commission (AEC) historian assigned to the admiral’s office, spent years observing the project and its controversial leader in action, and the insights he provides here reflect both his familiarity with the subject and his ability to remain an objective observer.

From 1974 to the day Rickover retired in 1982, Francis Duncan had free access to files, documents, and personnel at every level of involvement—a rare, never-to-be-repeated opportunity that most historians dream of but few get. And, as this book clearly shows, he took full advantage of the situation to gain a unique understanding of exactly how the program operated. The result is a thorough, balanced record of what may well be the U.S. Navy’s and the nation’s most important and far-reaching project of the twentieth century.

Knowing that facts and figures alone don’t tell the entire story, Duncan talked to scores of people who dealt with day-to-day operations, watched men in prototype training and then accompanied them to sea, visited civilian and naval installations, and had close contact with Rickover himself. He also interviewed former U.S. presidents, secretaries of the navy, chiefs of naval operations, AEC chairmen, and legislative leaders who kept tabs on the projects but were removed from daily activities. Never once, the author says, did the admiral attempt to interfere with his research, nor did Rickover read the manuscript.

While the focus here is on the nuclear program, not the man, this book does provide fascinating insights into Rickover’s personality and his efforts to maintain standards of excellence that would assure the program’s safety and its ultimate success. Using one of the admiral’s favorite terms, “the discipline of technology,” to demonstrate the method of technological application advocated by Rickover, Duncan effectively balances technical detail with astute analysis and even drama. Filled with information not found elsewhere, his study is a valuable chronicle of the development of submarine propulsion reactors, the loss of the Thresher, the struggle over the application of nuclear propulsion to surface fleet, and the use of the Shippingport Atomic Power Plant to illustrate the feasibility of a light-water breeder reactor.

Francis Duncan, a resident of Bethesda, Maryland, and Navy veteran of World War II, was a government historian for more than twenty years. His earlier book on the admiral, Rickover and the Nuclear Navy, published by the Naval Institute in 1990, focused on the admiral's approach to managing a technical program.

“Sound in scholarship, intelligently organized, clearly written . . . Francis Duncan has a sense for the dramatic. . . . A worthy sequel to the Nuclear Navy.” —Richard W. Leopold, History Professor Emeritus, Northwestern University, formerly a member of the Atomic Energy Commission's Historical Advisory Committee and of the Secretary Of the Navy's Advisory Committee on Naval History

“A definitive contribution. . . . There is more than enough material here for future researchers to chew on. It is especially interesting to individuals like myself who rubbed elbows with Rickover and learned to admire him, warts and all.” —Capt. Edward L. Beach, USN (Ret.), Former commander of the nuclear Submarine USS Triton and author of Around the World Submerged

“This book is probably as close as we will get to an inside view of what happened in the reactor development shop.” —Norman Friedman, Author of Submarine Design and Development