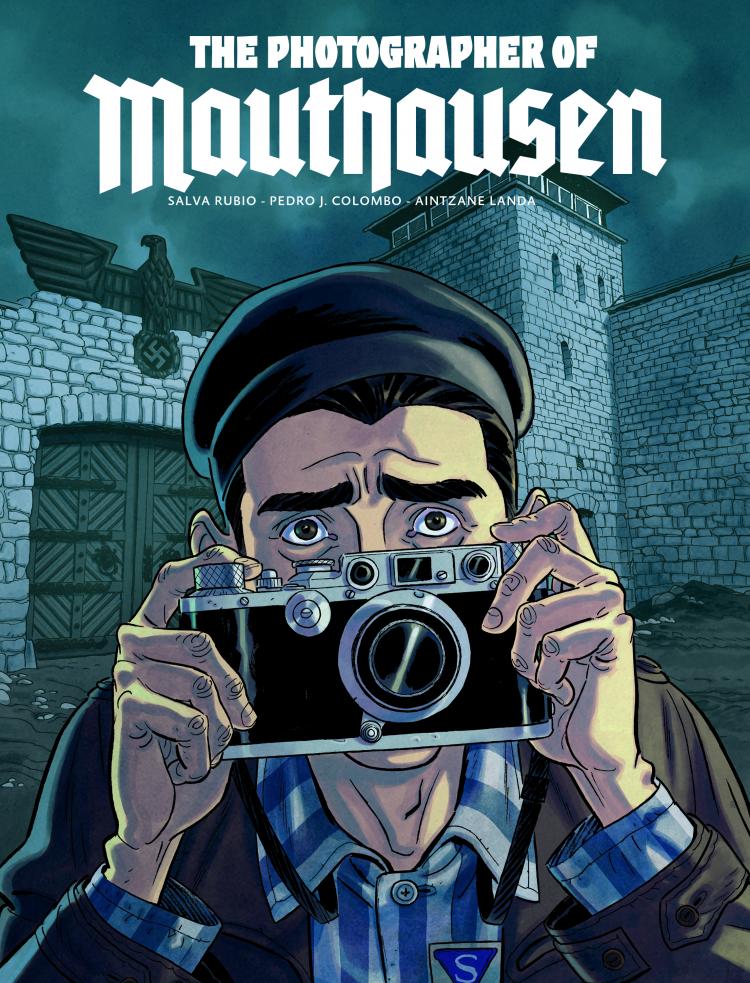 The Photographer of Mauthausen

This is a dramatic retelling of true events in the life of Francisco Boix, a Spanish press photographer and communist who fled to France at the beginning of World War II. But there, he found himself handed over by the French to the Nazis, who sent him to the notorious Mauthausen concentration camp, where he spent the war among thousands of other Spaniards and other prisoners. More than half of them would lose their lives there. Through an odd turn of events, Boix finds himself the confidant of an SS officer who is documenting prisoner deaths at the camp. Boix realizes that he has a chance to prove Nazi war crimes by stealing the negatives of these perverse photos—but only at the risk of his own life, that of a young Spanish boy he has sworn to protect, and, indeed, that of every prisoner in the camp.

Salva Rubio is a Spanish author and historian who has been recognized multiple times for his scriptwriting, ranging from short films to feature-length films and graphic novels. Having earned a master's degree in scriptwriting for film and television, Rubio has worked for several Spanish production companies, including a short film nominated for the Goya awards in 2010, and the feature-length animated film "Deep" in 2016. Rubio made his debut in the comics field in 2017 with two striking and very different projects: Monet: Itinerant of Light and The Photographer of Mauthausen, both of which have met with critical acclaim.

Spanish artist Pedro Colombo was born just outside of Barcelona in 1978. With a passion for drawing dating back to his childhood, he went on to attend Escuela Joso, Spain’s most renowned comics institute. Colombo is the creator of Sangre Noctambula and co-creator of Trois . . . et l'ange.

“Salvia Rubio does an amazing job with the storytelling, layering in historical details, while captivating you with a dynamic plotline. I read this novel in one sitting…. I genuinely cared about the characters and cried for them throughout the novel. Also, I am appreciative of the way the illustrations tell the story…. If you like historical fiction, you’ll love this book. It has everything: stunning illustrations, a deep plotline, historical significance... everything you could want.” —Travel Through Fiction

“I was not familiar with Francisco Boix’s story before picking up The Photographer of Mauthausen, but the graphic novel struck such chords that I doubt I will ever forget it. The book offers insight into the lives of Mauthausen's political prisoners and the protocols designed to exterminate them through hard labor. The artistry of the panels chronicles these realities, and … I appreciate the care and dedicated resolve Rubio, Colombo, and Landa exhibit in their handling of the material.... I am drawn to themes when reading, and more than once lost myself in the ideas this story provoked. I was intrigued by the manufacture of visual propaganda as explored in the early portion of the novel, but I was also moved by the narrative's approach to the transformative effects of desperation, survivor guilt, and the question of how to chronicle experience to individuals who did not share in it…. Highly recommended.” —Historical Fiction Reader

“Moving and suspenseful,  The Photographer of Mauthausen  is a based-in truth story of survival in a Nazi concentration camp…[woven] into a taut, gripping thriller…[and] an inspiring historical graphic novel whose visionary hero persists in the face of incredible adversity.” —Foreword Reviews, Starred Review

“[A] must read graphic novel!” —Books and Books Only

“A remarkable testament to the Spanish Republicans arrested by the Germans in France during the Holocaust and sent to Mauthausen Concentration Camp. I particularly loved the color, and how it set the mood in this devastating story.” —Wayne Vansant, author of Katusha: Girl Soldier of the Patriotic War

“The Photographer of Mauthausen by Salva Rubio & illustrated by Pedro Columbo, is a dramatic retelling of true events in the life of Francisco—or François—Boix, a Spanish press photographer and communist who fled to France at the beginning of World War II. This beautifully illustrated book talks about the harsh and truthful events that occurred during the World War II at Nazi concentrated camps. The pictures and illustrated speak true to the events and some of them do give you goosebumps.... If you are looking to read any book related to World War II then I highly recommend you check this out. The information is well researched and the photographs are truly commendable. They bring into light the true feelings and lives of people during those times.” —Avanik Shah Blog

“With exacting artistic detail, this complex and often disturbing history comes alive, and is at times thrilling, and just as often disillusioning.” —Publishers Weekly

“Rubio does a truly admirable job of keeping you at the edge of your seat, fearful at what fate beholds Boix and his allies at the turn of every page. Colombo’s and Landa’s art is impressive. So much relies on the eyes of the characters, their hopes and fears, the need to hide their true feelings. Gory scenes are placed alongside intimate conversations, and it all just works. In lesser hands, such a juxtaposition might not have. The Photographer of Mauthausen is a great accomplishment. There are a lot of graphic novels about WW2 very few of them are as good as this.” —Social Blunderer

“Francisco Boix was a Spanish photographer and communist who fled to France during the Spanish Civil War. As a WWII POW, he was taken to Mauthausen, an Austrian extermination camp for irredeemable prisoners. His work as prison photographer began with him taking pictures of prisoners as they entered the camp; he then moved on to photographing dead prisoners on the orders of SS officer Paul Ricken. To prove the injustices being performed, he arranged for the incriminating film to be smuggled out of the camp. Boix’s heart-wrenching story is written as if he is relaying his experience to his missing sister, so his feelings are expressed in a candid manner, though his incredible bravery is obvious. There are plentiful details, both written and illustrated; the fear of the prisoners is identifiable on their faces, and Colombo uses muted colors for the art in the camp. Reproductions of Boix’s photographs are drawn with a high level of detail. Recommend this to WWII buffs who think they’ve read it all.” —Booklist

“This was a pretty amazing [and important] story to read…. This graphic novel tells how a man survived a terrible ordeal.” —The Good Men Project

“This graphic novel is strikingly authentic.” —The Graphic Library

“Stunning, dramatic, and scary…. This is beautifully done [and] the detail is incredible.” —Masked Library