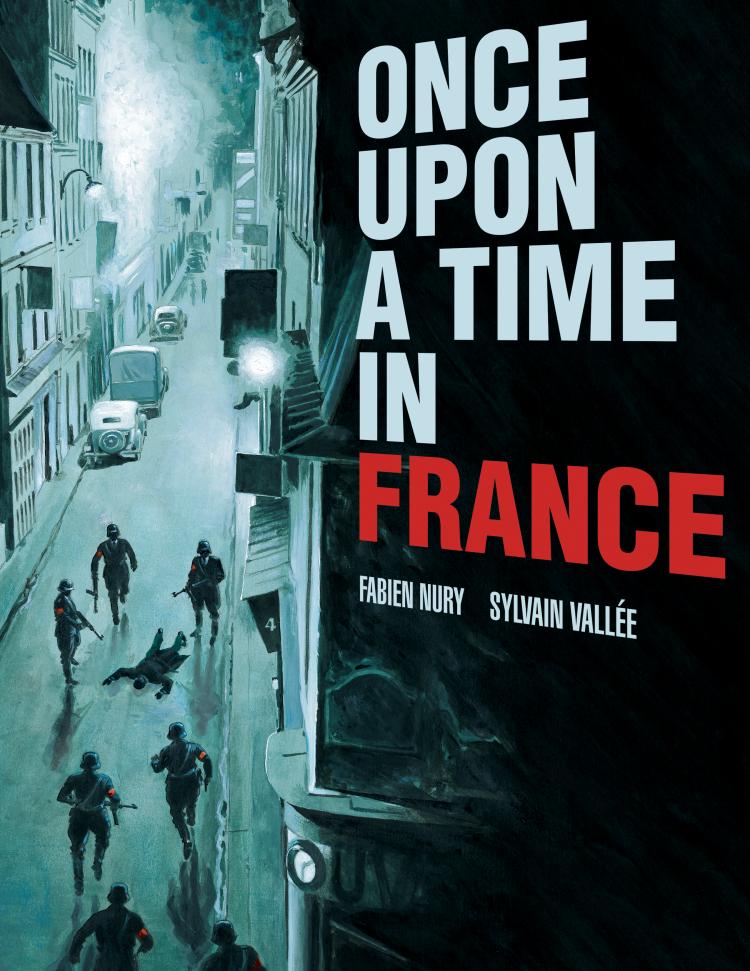 Once Upon a Time in France

Based on a true story, Once Upon a Time in France follows the life of Joseph Joanovici, a Romanian Jew who immigrated to France in the 1920s and became one of the richest men in Europe as a scrap-metal magnate. For some, he was a villain. For others, a hero.As Germany occupies France, Mr. Joseph thinks his influence can keep his family safe, but he soon finds that the only way to stay one step ahead of the Nazis is to keep his friends close and his enemies closer. Though he plays both sides of the fence as a Nazi collaborator and French resistant, a tangled web of interests forms around him that proves it will take a lot more than money to pay for the survival of his family. An international bestseller with over 1 million copies sold, the French series Once Upon a Time in France, collected here in one omnibus edition, has won the BDGest’Arts Best Scenario Award, BDGest’Arts Album of the Year, and Angoulême International Comics Festival Best Series Award, among many others.

Fabien Nury has scripted more than ?fteen comics series, including Once Upon a Time in France, which won the Best Series Award at the Angoul�me Comics Festival and The Death of Stalin, which was adapted to the ?lm with Steve Buscemi. Nury is also a television screenwriter and has created the Guyane TV series.

"To portray Joseph Joanovici in a graphic novel is to plunge into the dark alleys of World War II. The Gestapo, collaborators, inhuman sufferings, the Resistance—Joseph Joanovici combined a little of it all, blended into a dark, maleficent alchemy. . . . Six years after the first volume, the story is still breathtaking, and readers remain riveted by the force of Fabien Nury’s script and the intensity of Sylvain Vallée’s graphics." —JEAN-PHILIPPE LEFEVRE, Coup de coeur BD

"Once upon a Time in France is one of the best series in recent years. Public and critical plaudits include the Parisian readers’ award in 2009 and the best-series award at Angoulême in 2011. The series traces the life of Joseph Joanovici, a Romanian Jewish scrap merchant who became one of the richest men in France during World War II." —Le Parisien

"The saga by Fabien Nury and Sylvain Vallée ends superbly with the sixth episode. The final years of an ambiguous, magnificent character full of paradoxes are portrayed brilliantly by the two authors, disturbing notions of good and evil. Masterful!" —L’Écho républicain

"Combining cinematographic narrative with graphic skills in the best of the Franco-Belgian tradition, this story in history reveals not Manichaeistic good-evil oppositions but the depths of a complex individual and the darkness of a historical period." —THOMAS RABINO, Marianne

"A critical and popular triumph, rewarded by the series prize at Angoulême, the saga by Fabien Nury and Sylvain Vallée takes us into a Dantesque portrayal of postwar France." —Écho des savanes

"It is with regret that we must leave behind this Joseph Joanovici, who was a real person with a destiny that was nothing if not novelistic. . . . He became the ambiguous hero of a remarkable popular series in which the narrative remains dense and captivating throughout all six tomes, based on a flawless historical foundation." —Télérama

"History with a big H is an extraordinarily vast pool of subjects. It is a true space of freedom without the budgetary constraints of filmmaking. . . . In historical graphic novels, writers can revisit earlier times to reveal things that are not widely known." —Fabien Nury, Marianne

“A chapter in this powerful work begins with Nietzsche’s quote: “Whoever fights monsters should see to it that in the process he does not become a monster.” This tale’s fascinating characters desperately try to remain untarnished as they navigate a hazy line between what’s altruistic and what is sinfully selfish. The beautiful visual storytelling and dialogue blend together perfectly.” —Carl Potts, Former Marvel Comics Executive Editor, School of Visual Arts professor

“Reminiscent of the best novels of John Le Carré, but based on true events, this is an absolutely riveting thriller that asks difficult questions about good and evil and whether actions taken in the heat of battle can be fairly adjudicated in peacetime. It’s easy to see why this work has already won the coveted Angoulême Award and sold over one million copies internationally.” —Library Journal, Starred Review and Editor’s Pick Fall 2019

“A wonderful story of dedication…. Fabien Nury does a wonderful job of retelling a story that intrigues on multiple levels. Add in the fact that this is pretty much a true story of WWII France, and it becomes even more appealing. If you love that era, or even stories with such moral quandaries, I highly recommend this graphic novel.” —That Hashtag Show

“The art is carefully drawn, and as one reads through Nury’s captions to Vallee’s panels, one is tempted … to admire Joanovici’s dogged determination and cleverness in the face of the ever-present likelihood of a firing squad.” —San Diego Jewish World

“Once Upon a Time in France does an excellent job drawing the reader into a completely different time and place. It forces contemplation of what the reader would do if in Joseph’s place. The artwork is beautiful and really enhances the feeling of immersion in French culture and the shock of war. 4.5 stars!” —Diane Reviews Books

“Excellently drawn by Vallee in a style reminiscent of film noir style, Nury tells a compelling tale using both actual historical figures, some composite characters and a few invented ones." —Spotter Up

“A fascinating hybrid of war history, biography and true crime, Once Upon a Time in France is a must-read for graphic novel fans as well as a compelling and artfully imagined story that will likely resonate with readers of all stripes.” —Shelf Awareness

“This story is emotionally rough and quite intense…. The illustrations are as intense as the story; the plot and illustrations combine perfectly to completely immerse you in this wretched, traumatic tale.” —San Francisco Book Review

“Once Upon a Time in France is such a gorgeous book…. You will be utterly pleased by reading this impressive omnibus edition. It satisfies on many levels: as a brilliant example of the comics medium; as a wonderful taste of European culture; and as a rollicking good thriller!” —Comics Grinder

“The extraordinary moral ambiguity of Once Upon a Time in France makes it a fable for our times.” —Adm. James Stavridis USN ( Ret.), Supreme Allied Commander at NATO (2009-2013), Dean Emeritus, The Fletcher School of Law and Diplomacy Tufts University (Dean 2013-2018)

“Award-winning Once Upon a Time in France presents the thrilling and complicated life of profiteer Joseph Joanovici, who made millions staying alive at any cost.” —The Times of Israel

“There are few Holocaust graphic novels that are as well researched and detailed.” —Dr. Jean-Marc Dreyfus, senior fellow at the US Holocaust Memorial Museum

“Nury’s fine dialogue and the excellent illustrations by Sylvain Vallée bring an almost cinematic perspective to the book that keeps the reader turning pages. This book is highly recommended.” —Historical Novel Society

“Joanavici’s story is well-anchored by dramatic images and terse dialogue. With artwork that mimics a classic noir style, its nostalgic vibe suits its subject matter…. World War II buffs in particular will love the wealth of historical detail in Joanavici’s dizzying web of give-and-take as he plays both sides in the name of survival.” —Washington Independent Review of Books

“Once Upon a Time in France is a carefully thought out exploration of the fragility of the relationship between survivalist instincts and morality, rendered in exquisite detail…. The artwork throughout is gorgeously detailed and Vallée is responsible for much of the emotional impact of the text through his subtle expression work on the faces of the characters. Disgust, fear, shame, deviousness, delight—each expression is palpable thanks to Vallée’s deft hand…. A quality printing of a highly recommended read, Once Upon a Time in France is well worth your time and money.” —Comic Watch

“Once Upon a Time in France is a stunning read. It has a satisfying density, investigating ethical issues and grim deeds, not restricted to those with Joanovici’s involvement, yet within the format of a compelling crime thriller with utterly tragic moments. It’s amazingly drawn and won prizes at both of Europe’s most prestigious comic festivals, Angoulême and Lucca, and at a cover price of $29.99 for over 350 pages, it’s astonishingly good value.”  —Slings & Arrows

“Is Joanovici a traitor or a hero? A man who sold his soul or a man who did the best he could in extremely difficult, nearly unimaginable circumstances? These are questions that the French courts had to determine and which Once Upon a Time in France also invites the reader to consider.” —European History Quarterly