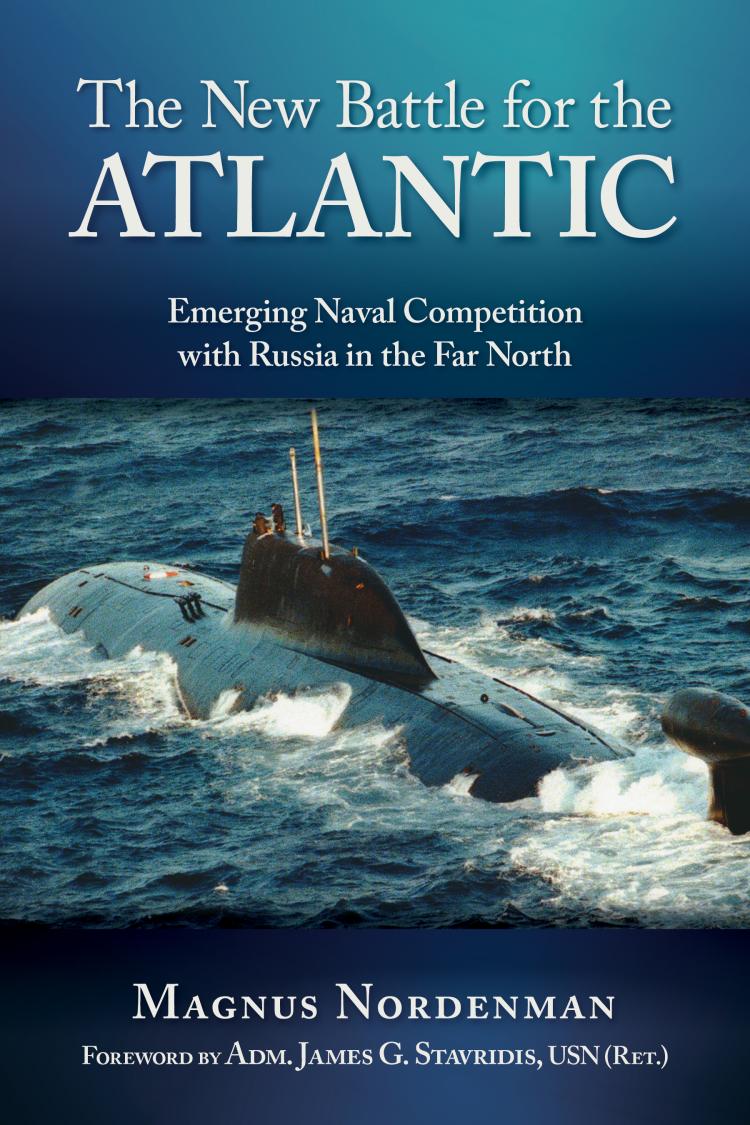 The New Battle for the Atlantic

In this book, Magnus Nordenman explores the emerging competition between the United States and its NATO allies and the resurgent Russian navy in the North Atlantic. This maritime region played a key role in the two world wars and the Cold War, serving as the strategic link between the United States and Europe that enabled the flow of reinforcements and supplies to the European Allies. Nordenman shows that while a conflict in Europe has never been won in the North Atlantic, it surely could have been lost there.

With Vladimir Putin’s Russia threatening the peace in Europe following the annexation of Crimea in 2014, the North Atlantic and other maritime domains around Europe are once again vitally important. But this battle will in many ways be different, Nordenman demonstrates, due to an overstretched U.S. Navy, the rise of disruptive technologies, a beleaguered NATO that woke up to the Russian challenge unprepared for high-end warfighting in the maritime domain, and a Russia commanding a smaller, but more sophisticated, navy equipped with long-range cruise missiles. Nordenman also provides a set of recommendations for what the United States and NATO must do now in order to secure the North Atlantic in this new age of great power competition.

Magnus F. Nordenman is a noted NATO expert who formerly served as the director of the Transatlantic Security Initiative at The Atlantic Council in Washington, DC. He has provided advice to the U.S. government and European allies on the future of NATO, the alliance�s role in the maritime domain, and defense and security matters in northern Europe. His insights and commentary have been featured in The New York Times, The Washington Post, Defense News, CNN, the BBC, and MSNBC. He has lectured at NATO�s Maritime Command, the US Naval War College, and other military educational institutions.

“Magnus Nordenman provides a concise history of the allied defense of the transatlantic bridge, and creates a foundational work for understanding the nature of the maritime challenge confronting NATO.  It is a clarion call for a renewed commitment by NATO to the development of a 21st century maritime strategy.” —ADM Mark Ferguson, USN(ret.), former Commander, US Naval Forces Europe and NATO’s Allied Joint Forces Command, Naples, Italy

“This book serves as an important reminder of the importance of the North Atlantic to U.S. and European security and cohesion and how this maritime space has been used in conflicts that have determined major turns in recent history. But it also reminds us how the Atlantic has served as a space for close cooperation between the United States and its allies and partners, and even with its erst-while adversaries at times. But this book is no mere history lesson. It paints a vivid portrait of how changing geopolitics, technology, transformed U.S. and allied naval forces, and a renewed Russian way of war will present a far different challenge for the United States and NATO leaders in the twenty-first century.” —From the Foreword by Adm. James Stavridis, USN (Ret.), former Supreme Allied Commander at NATO, 2009 to 2013

In his timely new book, Magnus Nordenman has provided a very comprehensive overview to the fourth battle of the Atlantic. And in so doing, he does a solid job providing an understanding of how the Russian challenge is both different from and similar to that posed by the Soviet challenge…. Nordenman has written a timely and important book.” —Defense.info

“Worth the time to both read and ponder.” —Virtual Mirage

“The New Battle for the Atlantic offers a penetrating look at a theater critical for securing peace.” —The Daily News

“In this fast paced and well researched volume, the author assesses the challenges arising from a revanchist Russia following the annexation of the Crimea by Russia in 2014…. Nordenman has produced a book for the general reader who has an interest in the way that modern geopolitical realities have an effect on developing naval strategy.” —Naval Historical Foundation

“A useful introduction to the topic.” —History: Reviews of New Books

“This timely book — with a forward by Adm. James G. Stavridis — takes on the increasing ‘Great Power Competition’ between NATO and a resurgent Russia in the North Atlantic domain.” —Seapower

“Nordenman makes a compelling case for the continued significance of the maritime realm in any future conflict and the need for a NATO military strategy.” —The Russian Review

“Nordenman provides a geographical overview of the North Atlantic, a primer on the capabilities and limitations of modern submarines, and a concise history of warfare in the region. Nodernman is an economical writer, and he wastes not an inch of page on superfluous detail. I will almost certainly return to The New Battle for the Atlantic as a reference on technology, geography, history, or strategy.” —Lossi 36

“The North Atlantic saw German and Allied submarine activities in both world wars and Russian submarine activities in the Cold War. Magnus Nordenman discusses sea control of the region in today’s technological environment. His excellent book would appeal to anyone interested in maritime control and logistical support.” —The Ensign

“The focus of this book is to provide the reader with a brief overview of the current political and military developments of the Russian Navy for dominance in the North Atlantic Basin as it relates to NATO…. It is interesting and easy to follow.” —International Journal of Naval History