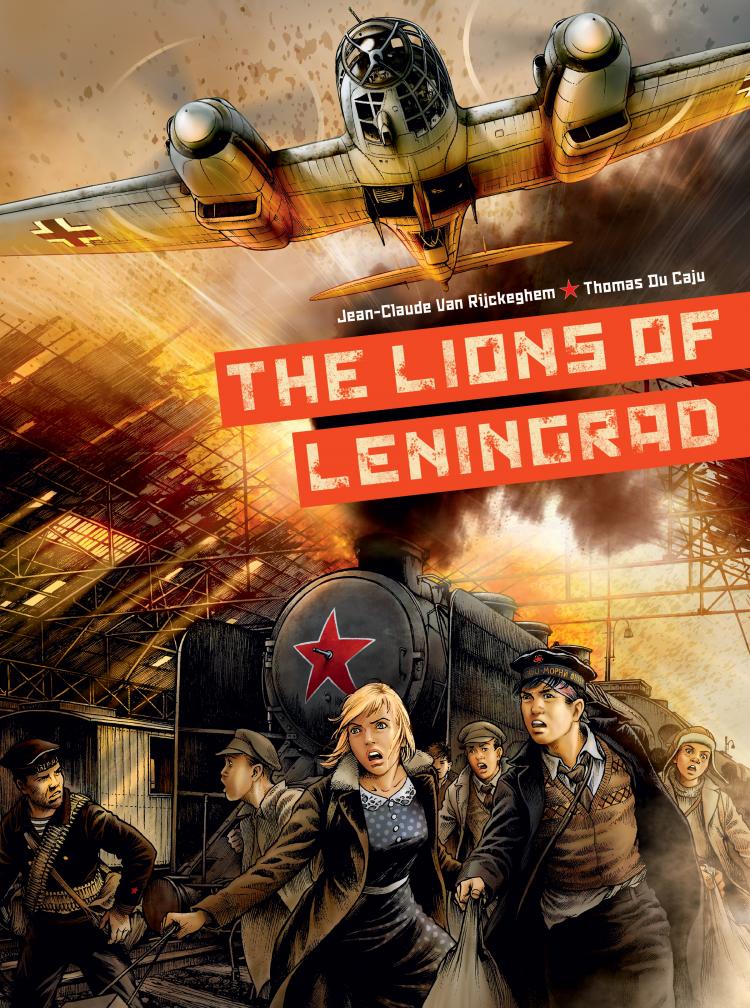 The Lions of Leningrad

On January 27, 1962, a concert at the Maly Theatre in Leningrad is interrupted by a gunshot and an ex-state prisoner is arrested. At the police station, the mysterious gunman recalls the early summer of 1941… When the German army begins its invasion of Soviet Russia, four children are evacuated to the countryside: Maxim, the son of a senior Communist Party official; Pyotr, the son of writers; Anka, the daughter of a concert violinist; and Grigory, the son of a pilot that was executed for insubordination. The farm where they are staying is attacked and the train that is supposed to take them to safety is blown to bits by German planes. The four children must fight through enemy lines to get back to their families in Leningrad. But all that awaits them is the beginning of one of the most prolonged and destructive sieges in history. Two and half desperate years that will push their friendship — and their lives—to the limit.

Jean-Claude van Rijckeghem is a Belgian writer and producer. He has a master’s degree in languages. He has written or co-written screenplays for fifteen feature films in Flanders and the Netherlands including Cannes Critics’ Week screenplay award winner Moscow, Belgium (2008). Jean-Claude is the co-author of several critically acclaimed and widely translated Young Adult novels. His latest, Ironhead or Once a Young Lady will be published in the U.S. in 2022.

After studying art at Saint-Luc in Ghent, advertising illustrator Thomas Du Caju worked in animation and 3D. He collaborated with Merho on De Kiekeboes, then with the Vandersteen studios on Bob and Bobette (Spike and Suzy). In 2005, he illustrated the crime series Sabbatini, written by Luc Morjaeu for the Dutch magazine Mezzanine. Then, he teamed up with producer and scriptwriter Jean-Claude Van Rijckeghem for the series Betty & Dodge, followed by The Lions of Leningrad.

“A gripping, action-filled story…. . The artwork is top-notch and the script is very well done.” —Arcadia Pod

“Van Rijckeghem does a great job as a storyteller. By choosing teenagers as the protagonists rather than adults, he is able to show the affect of the extremes of war on the innocents…. The artwork is also incredible. Du Caju uses color and light to help portray the mood of the story. Before the siege begins, there are lots of bright colors. However, as winter and the siege sets in, the art turns darker, with grays and blues. The detailed drawings, especially the emotions on the faces of the characters, really help bring them to life…. The Lions of Leningrad is a great graphic novel [and] is highly recommended.” —GeekDad

“If you are looking for a graphic novel that provides an overview of the siege of Leningrad, The Lions of Leningrad fits the bill. In addition to the military assaults dealt by German forces, the narrative incorporates the oppression of the NKVD and the terrible intensity of the Russian winter. The four main characters and their relationships leave much to be desired, but the illustrations and narrative effectively convey numerous aspects of the horror endured by the residents of that city.” —The Fandom Post

“It is both a coming-of-age story and a vivid – and sometimes chilling – account of the 872-day blockade of the Soviet Union’s second largest city and the costliest, most gruesome siege in history…. It’s an interesting story of friendship, loss, betrayal, and the human will to survive. Jean-Claude Van Rijckeghem writes a riveting – if perhaps a bit overwrought at times – coming of age story, and the illustrations by Thomas Du Caju are nicely drawn and colored in a classic comic book style.” —A Certain Point of View, Too

“The Lions of Leningrad is an engaging read with all the leads being likable and readers really start to care about these teens as they struggle with the general challenges of growing up along with simply trying to survive in a war-torn city where everything including food is a scarce commodity. Caju's artwork is fantastic, with scenes of fiery explosions igniting the page and the period-era cars, clothes, and vehicles looking like true-to-life replicas. Between the intriguing story and superb artwork, this is a great book. Recommended for anyone who enjoys historical fiction, great comic-book art, or who just wants to read a great story!” —The Newest Rant 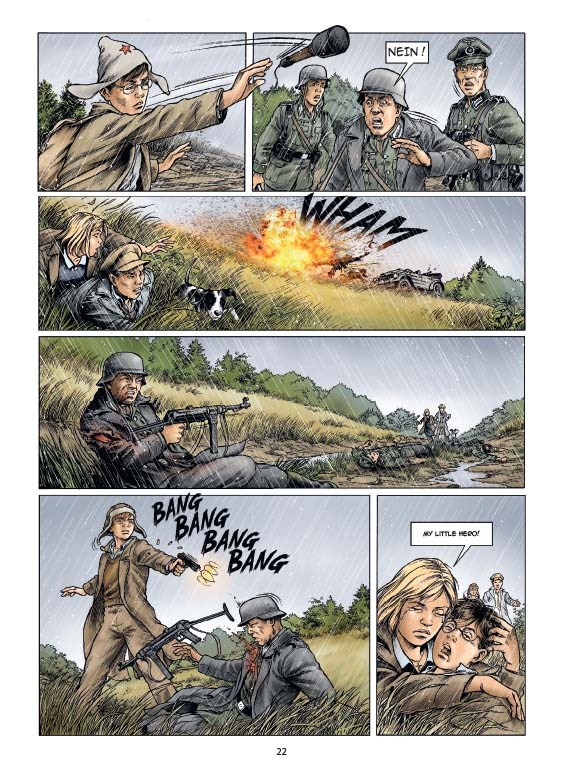 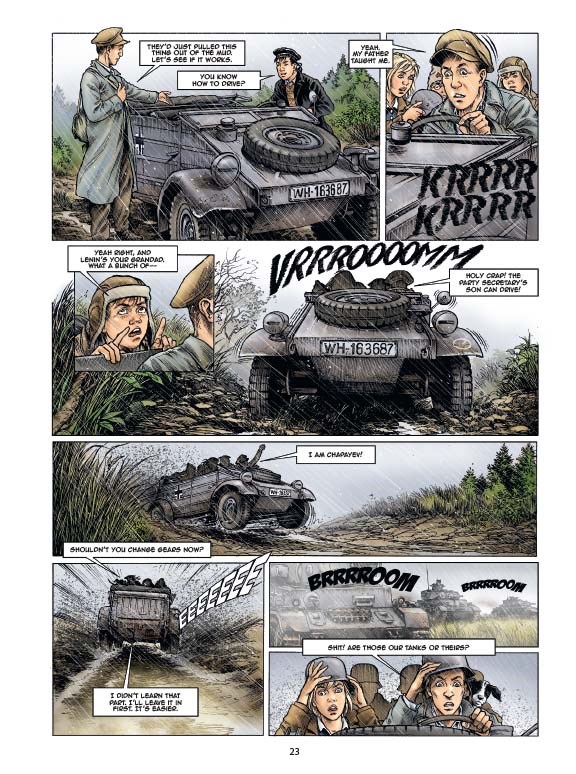 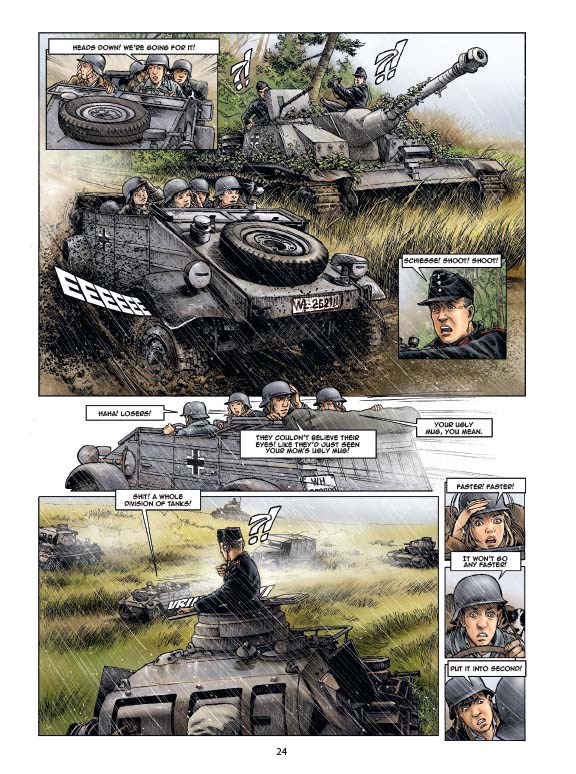 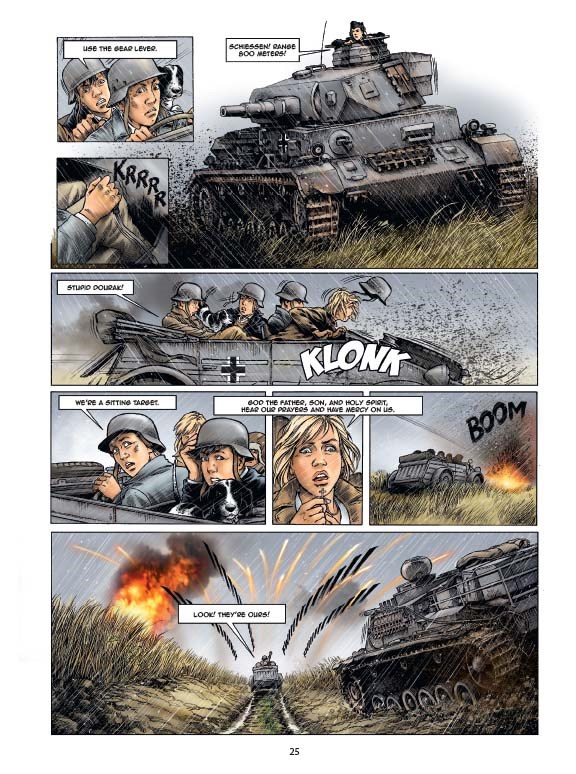