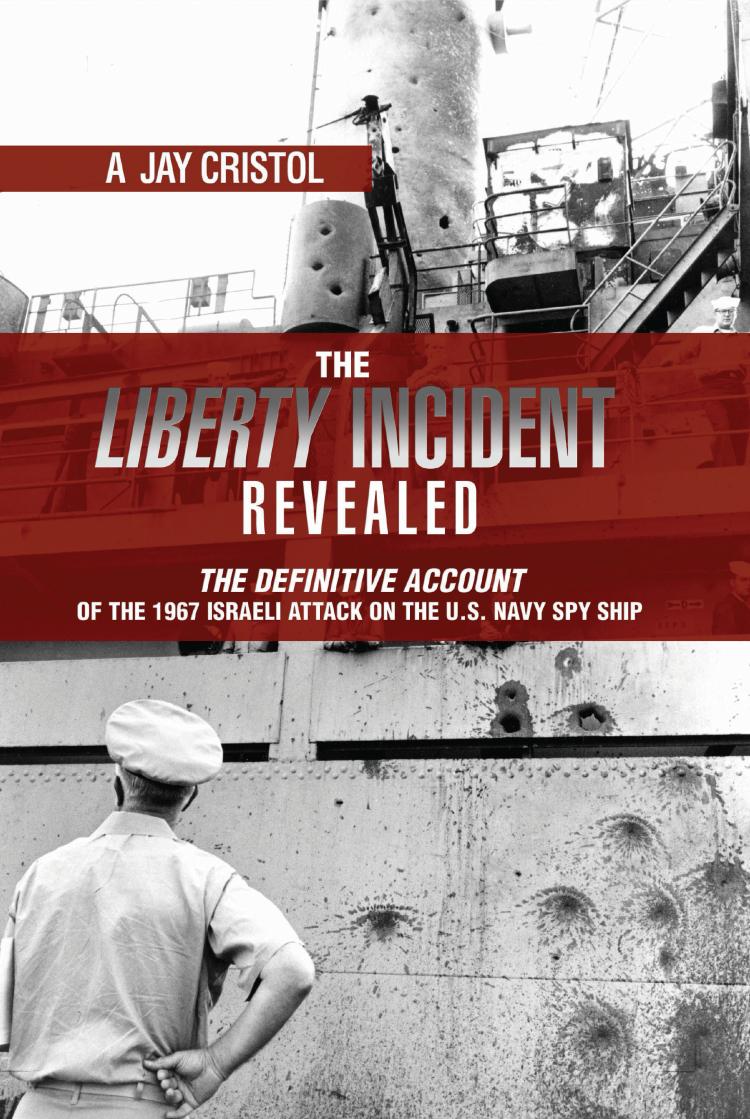 The Definitive Account of the 1967 Israeli Attack on the U.S. Navy Spy Ship
By A. Jay Cristol
Hardcover $18.43
Overview Author Reviews

The Liberty Incident Revealed is the complete and final story about the Israeli Air Force and Navy attack on the USS Liberty during the Six Day War in June 1967. Cutting through all of the controversy and conspiracy theories about Israel’s deadly attack, Cristol revises his well-regarded book about the event with an expanded and in-depth analysis of all of the sources, including the released tapes of the National Security Agency (NSA) intercepts.

When Cristol’s first book on the subject, The Liberty Incident, was published in 2002, there remained many unanswered questions about Israeli Air Force audio tapes. The NSA intercepts tapes had not yet been released in 2002. Some conspiracy theorists alleged the NSA tapes would prove that the Israeli attack was premeditated. Cristol’s successful Freedom of Information Act lawsuit against the NSA, while resulting in the release of those tapes, has been greeted by anti-Israel sources insisting that the NSA tapes are fraudulent and are part of a larger conspiracy to deceive the American public.

After a quarter of a century of intensive research in both Israel and the U.S., researching all relevant archives from NSA, CIA and the State Department, reviewing both formerly classified and open source documents, and interviewing all then-living individuals directly involved in the incident, the factual and documentary record is clear. Cristol maintains that despite the fact that all of the official records and transcripts are now available for review, the truth has proven to be of no interest to those individuals and organizations who are motivated by hidden agendas, wish to keep conspiracy theories alive, or are trying to feed sensational stories to the media. Documenting his findings in six new chapters, Cristol establishes definitively that the Israeli attack was a tragic mistake and presents a convincing argument that will be regarded as the final chapter in the long-simmering debate about this incident.

Capt. A Jay Cristol, USN (Ret.) JD, PhD, entered the U.S. Navy as an aviation cadet in November 1951. As a naval aviator, he flew day and night from the aircraft carrier Princeton during the Korean conflict. Upon return to civilian life, he joined the Naval Air Reserve where, during the 1960s, he flew volunteer missions to Vietnam. He wears the Meritorious Service Medal, the Navy Commendation Medal, and the Navy Achievement Medal among his more than a dozen military decorations. After eighteen years as a naval aviator, he became a Navy lawyer for another twenty years. In civilian life, he concurrently practiced civil law for twenty-five years. He currently serves as a federal judge and teaches law as an adjunct professor at the University of Miami. Cristol was named a Legal Legend by the Historical Society of South Florida in 2011.

"Cristol uses his law experience and follows precise rules of evidence, as he lays out his conclusions and deconstruction of conspiracy theories, that will be hard to reject. This book is well written, logical in its flow of information, and is recommended for anyone that might find themselves as a member of an investigation board." —Military Review

"This book is very well written with a logical and well-founded thesis. The author acknowledges the arguments of those who feel that the attack was in fact deliberate on the part of the Israelis and refutes their points through studied and well-structured arguments. His inclusion of the copies of the official reports as well as the transcripts of the communication logs between the naval and air assets of the Israeli forces and their command centre provides excellent insight for the reader into the confusion and dysfunction existing within both the US and Israeli militaries. This book provides good value, and it is an excellent read about a side of the incident often overlook in the histories of the Six Day War." —Canadian Naval Review

"Cristol's scholarship in investigating the incident will not convince all persons about the reason or lack thereof for the attack, but it is an impressive work of investigation, well worth reading." —The Daybook

The Liberty Incident Revealed leaves few stones unturned. Little documentary evidence appears unexamined or unreleased, and there is less reason to believe that it would materially alter the conclusion that the incident was a tragic accident. It is surely the definitive account; one that cannot be ignored and is unlikely to be surpassed.ùInternational Journal of Maritime History

"This is thus both a readable and relevant book." —The Naval Review

"This is the definitive book on the Israeli attack during the Six-Day War.... A superb account." — Foreign Affairs

". . . An exhaustive analysis . . .the author knows more about than anyone else who has written on it." — Proceedings

"A painstakingly detailed and footnoted account.: —The Miami Herald

"The most thorough study to date...Those who are interested in this story will want to read this book." — Middle East Journal