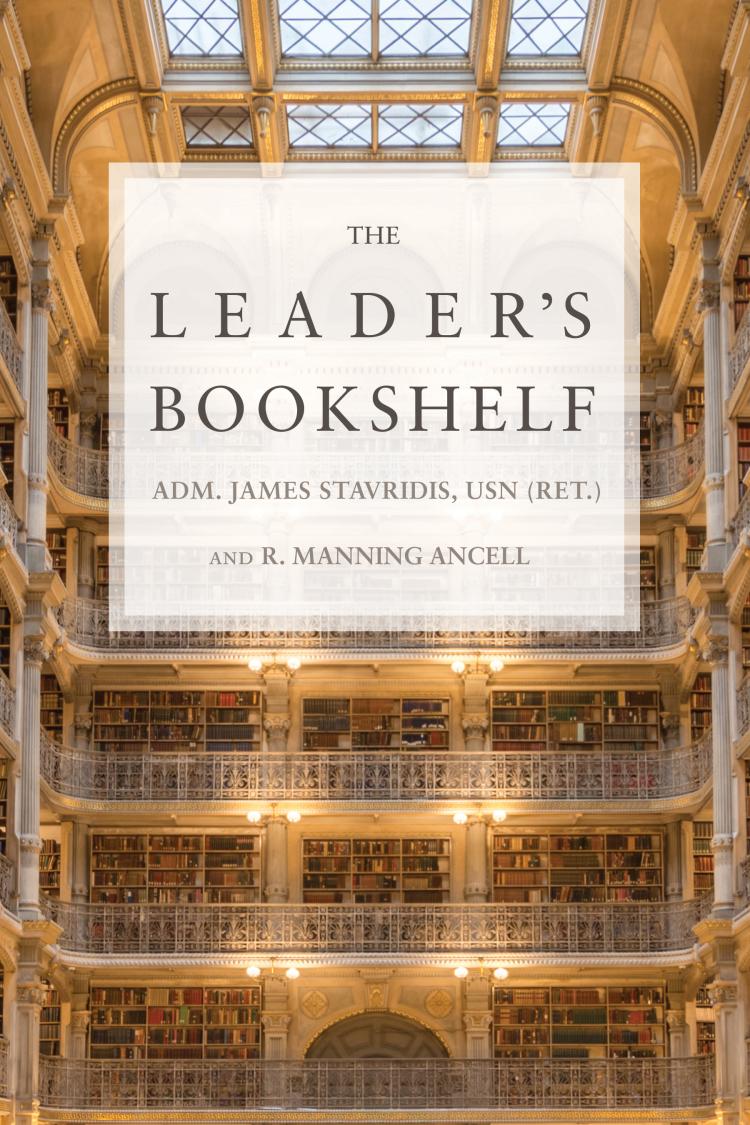 For the last several years Adm. James Stavridis and his co-author, R. Manning Ancell, have surveyed over two hundred active and retired four-star military officers about their reading habits and favorite books, asking each for a list of titles that strongly influenced their leadership skills and provided them with special insights that helped propel them to success in spite of the many demanding challenges they faced. The Leader’s Bookshelf synthesizes their responses to identify the top fifty books that can help virtually anyone become a better leader.

Each of the works—novels, memoirs, biographies, autobiographies, management publications—are summarized and the key leadership lessons extracted and presented. Whether individuals work their way through the entire list and read each book cover to cover, or read the summaries provided to determine which appeal to them most, The Leader’s Bookshelf will provide a roadmap to better leadership.

Highlighting the value of reading in both a philosophical and a practical sense, The Leader’s Bookshelf provides sound advice on how to build an extensive library, lists other books worth reading to improve leadership skills, and analyzes how leaders use what they read to achieve their goals. An efficient way to sample some of literature’s greatest works and to determine which ones can help individuals climb the ladder of success, The Leader’s Bookshelf is for anyone who wants to improve his or her ability to lead—whether in family life, professional endeavors, or within society and civic organizations. 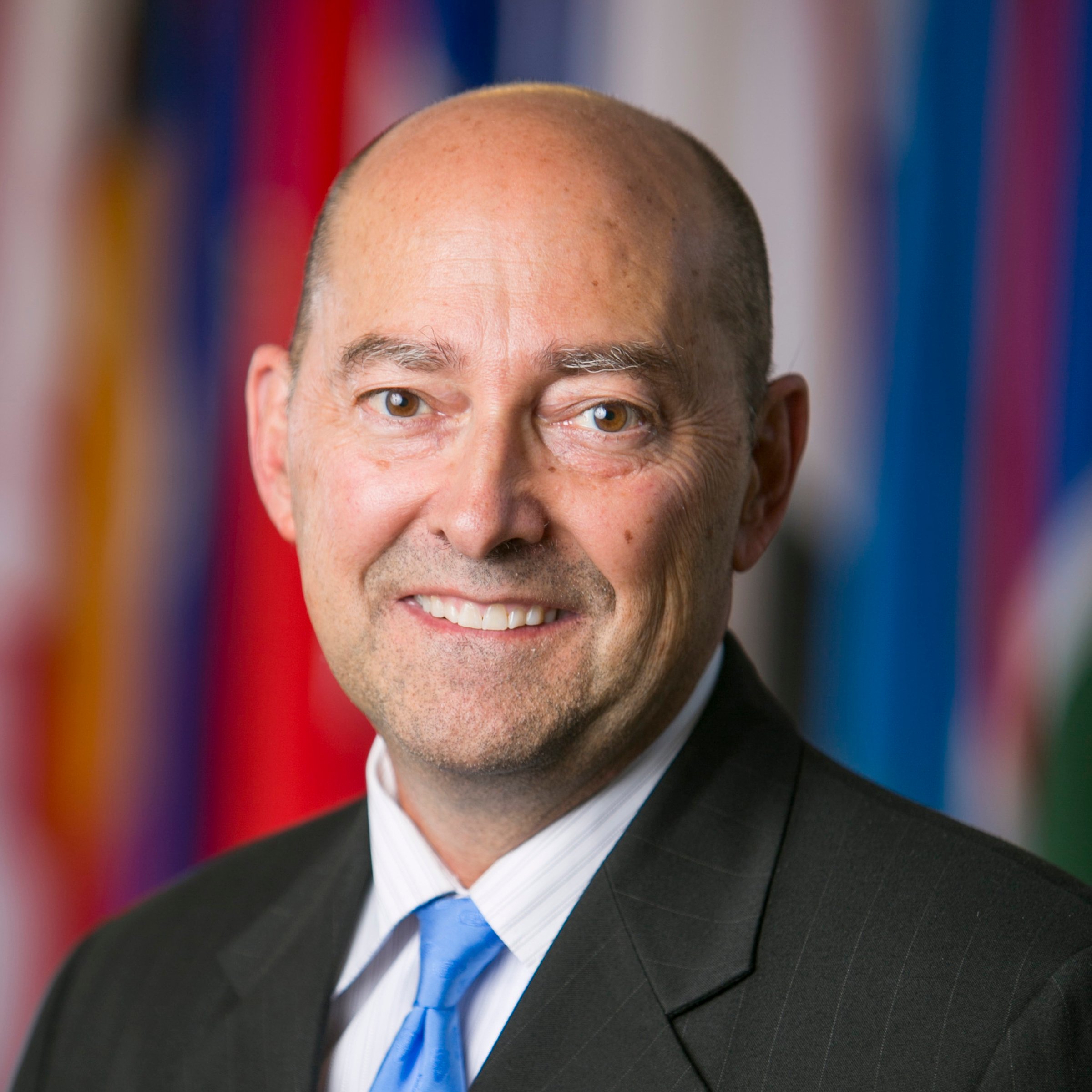 Adm. James Stavridis, USN (Ret.) is a 1976 distinguished graduate of the U.S. Naval Academy who spent over 35 years on active service in the Navy. He commanded destroyers and a carrier strike group in combat and served for seven years as a four-star admiral, including nearly four years as the first Navy officer chosen as Supreme Allied Commander for Global Operations at NATO. After retiring from the Navy he was the 12th dean of The Fletcher School of Law and Diplomacy at Tufts University. He holds a PhD in international relations and was Chairman of the Board of the US Naval Institute. He is currently Vice Chairman, Global Affairs with The Carlyle Group; and serves as the 14th Chair of the Board of Trustees of the Rockefeller Foundation. He has written articles on global security issues for Time Magazine ,Bloomberg Opinion,The New York Times, The Washington Post, Atlantic Magazine, Naval War College Review, and Proceedings and is the author or co-author of ten books, including 2034,The Leader's Bookshelf and Destroyer Captain.

“[This book] is unique in its style and structure and outstanding in its personal and confident presentation... The Leader's Bookshelf is a singular and valuable contribution to developing effective leaders.” —Naval War College Review

“The Leaders Bookshelf is therefore something of a continuation of Stavridis' (and Ancell's) quest for critical thinkers and new knowledge. But it is more so, for it provides useful signposts and direction - as much for reading the past, as understanding the present, and scoping our futures.” —The NAVY Magazine

“...A very comprehensive list of books that should move, inspire, inform and educate both existing and prospective leaders. Inspiring stuff.” —Ausmarine

“The Leader's Bookshelf is easy to read and offers essayistic content.” —Militargeschichtlichen Zeitschrift

“The helpful hints coupled with the insights on the books makes this a useful book for any leader in any career. I recommend this book to all readers.” —Army University Press

“It is a deeply thoughtful and thought-provoking book, food for all minds at whatever stage of leadership or aspiration wherever the reader has reached.” —Tidskrift I Sjovasendet

“For any student of leadership, this book provides an excellent starting point for in-depth reading, along with a useful framework for continued study. Highly recommended.” —CHOICE

“Admiral Jim Stavridis knows the world of leadership well, from his service as Supreme Allied Commander at NATO to his job today as Dean of The Fletcher School at Tufts. He is an inveterate reader and believes in the power of books to make us far better leaders – as do I. The Leader's Bookshelf is a terrific resource for any leader.” —Gen. Stanley McChrystal, USA (Ret.), CEO of the McChrystal Group; former Commander, NATO and U.S. Forces Afghanistan

“I have known Admiral Stavridis since we entered the Naval Academy together and throughout our careers. He reads incessantly, and personifies the warrior-scholar leadership that our nation needs. The Leader's Bookshelf includes many books we've discussed together over the years, and taken together it is a powerful compendium at the heart of leadership.” —Gen. John Allen, USMC (Ret.), former Commander, U.S. Central Command and U.S. Forces Afghanistan

“Admiral Stavridis has shown throughout his career that leaders benefit tremendously from being well-read and thinking critically. The Leader's Bookshelf is a powerful collection of leadership lessons, drawn from outstanding works of literature, history, and biography. It is an important book from someone I deeply admire.” —Madeleine Albright, former Secretary of State

“Admiral Stavridis is a great leader because he is a great reader. As our NATO Commander while I served as Secretary of Defense, I always received great advice on defense issues along with wonderful advice for books and wine. The Leaders Bookshelf is a great summary of that advice–on books.” —Leon E. Panetta, former Secretary of Defense, Director of the CIA and Chief of Staff in the White House

“I've been trading book recommendations with Admiral Jim Stavridis since we worked together in the Pentagon over a decade ago. He explains better than anyone the power of books to help create leaders, and this is the best possible selection of books to light a path through the most challenging of situations.” —Gen. James Mattis, USMC (Ret.), former Commander of U.S. Central Command; Supreme Allied Commander at NATO for Transformation

“Leadership in the world of business depends on life experiences, strength of personality, and innate qualities–but you can never stop learning. Admiral Stavridis has captured an extraordinary list of leadership books, and provides very real insight into each of them. Taken together, they can help leaders in any enterprise improve their game.” —Dan Schulman, CEO, Paypal; chairman of Symantec

“The Leader’s Bookshelf is essential for good leadership because it helps us evaluate ourselves (‘what would I have done in that situation?’), allows us to think deeply about who our heroes and role models are, sharpens our written communication skills, and improves our leadership skills.” —THISDAY