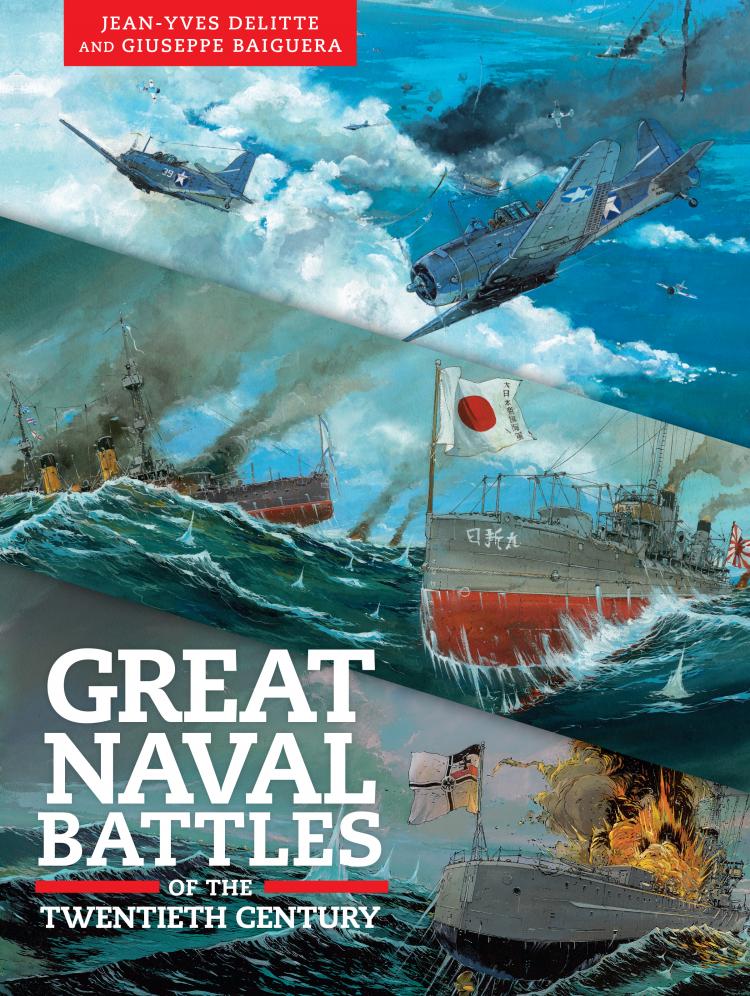 In the history of civilizations, sea power has always played a preponderant role. This symbol of a nation’s scientific and military genius has very often been the deciding factor during major conflicts, putting the names of several clashes down into legend. With this collection, Jean-Yves Delitte and Giuseppe Baiguera plunge into the heart of three of the twentieth century’s greatest naval battles.

TSUSHIMA. Newly opened to the world, Japan found itself to be weak and subject to the whims of larger nations. What followed was decades of industrialization and modernization as Japan sought to catch up to advanced nations and control its own destiny. In 1905, when Japan’s expansionist policies clashed with the Russian Empire over Korea, Japan was poised to flex its muscle and stun the world using the same naval supremacy that opened its borders half a century earlier.

JUTLAND. May 31, 1916: the British Royal Navy and the German Kaiserliche Marine are preparing to confront one another in the North Sea off the Danish coast of Jutland. This will be the final great confrontation of World War I by sea and one of the greatest epic battles in the history of seafaring. Despite heavy losses, which are greater than the Germans’, the English reaffirm their naval supremacy over the seas of the world, and Germany, all too conscious of having escaped disaster, will opt to confine the majority of its ships to its ports.

MIDWAY. December 7, 1941: the Empire of Japan strikes an early blow against the United States Navy at Pearl Harbor. In just a matter of hours, the era of the battleship would come to an endand the age of the aircraft carrier would begin. In June 1942, the Imperial Japanese Navy and its carrier fleet would try to seize the initiative again by attacking the island of Midway. What unfolds is an epic carrier duel, the likes of which the world has never seen. In the end, Japan would never recover from the losses at Midway, and the United States would carry this momentum until Japan’s ultimate defeat.

An official “Painter of the Fleet” and a full member of France’s independent Académie des Arts & Sciences de la Mer (Academy of Arts & Sciences of the Sea), Jean-Yves Delitte is an architect and designer by training. His first comic book stories appeared in the legendary weekly magazine Tintin. His great love for the open seas allows him to display the entirety of his talent through the creation of veritable naval frescoes.

“This is an immersive tour of war at sea in the 20th Century that brings readers alongside sailors and pilots in the battles that shaped the modern world. Delitte and Baiguera are masters of the form, crafting elaborate comics art to recreate time and place in ways that will transport, teach, and thrill you.” —Jeff Parker (James Bond: Origin, X-men First Class, The Hulk and Batman ’66)

“I’m not sure that there’s ever been a more beautiful book about the ugliness of war. Jean-Yves Delitte and Giuseppe Baiguera have crafted stories that combine heroism, tragedy, humanity, and sheer technical brilliance. We don’t make nearly enough comics this good.” —Ron Marz, comic writer, Green Lantern, Silver Surfer, Marvel vs. DC

“Great Naval Battles of the Twentieth Century delivers a multi-dimensional view of naval history. Dramatic illustrations capture the might and majesty of warships in combat with a narrative composed of vivid moments that illuminate the complex background of these affairs as well as the hopes and fears of the participants, from admirals to stokers, and the loved ones left onshore. It is a work to inspire interest in and further research into these climatic events that greatly influenced the outcome of the last century’s major wars.” —Vincent P. O'Hara, author of Six Victories: North Africa, Malta, and the Mediterranean Convoy War, November 1941–March 1942

“The ships are drawn with great detail…. The coloring is beautiful and vibrant.” —The Graphic Library

“Delitte and Baiguera, with the support of the the French National Navy Museum, deliver a dramatic history of significant 20th-century naval battles that impresses with its research.... Delving into three battles—Tsushima (1905), Jutland (1916), and Midway (1942)—Delitte and Baiguera honor both the officers and rank-and-file combatants who fought and died at each…. Delitte and Baiguera take turns drawing sections, and Baiguera’s clean line wonderfully complements Delitte’s looser strokes.” —Publishers Weekly

“Creators Jean-Yves Delitte and Giuseppe Baigurea build-up tensions for these famous battles with an assortment of characters planning and plotting.... The art is solid, with the clothing of the time and machines of war clearly well-researched and drawn with immense skill….. If you're into reading about the past as I am you'll have a stellar time.” —The Newest Rant

“This is another stunning volume from Dead Reckoning…. These battles, which may have been one of four options on your high school history class, explode off of the page.” —Masked Library

“This graphic novel delivers quite a bit of information with beautifully drawn and colored illustrations.” —The Fandom Post

“Great Naval Battles of the Twentieth Century delivers quite a bit of information with beautifully drawn and colored illustrations.” —Keeping it Canon… mostly