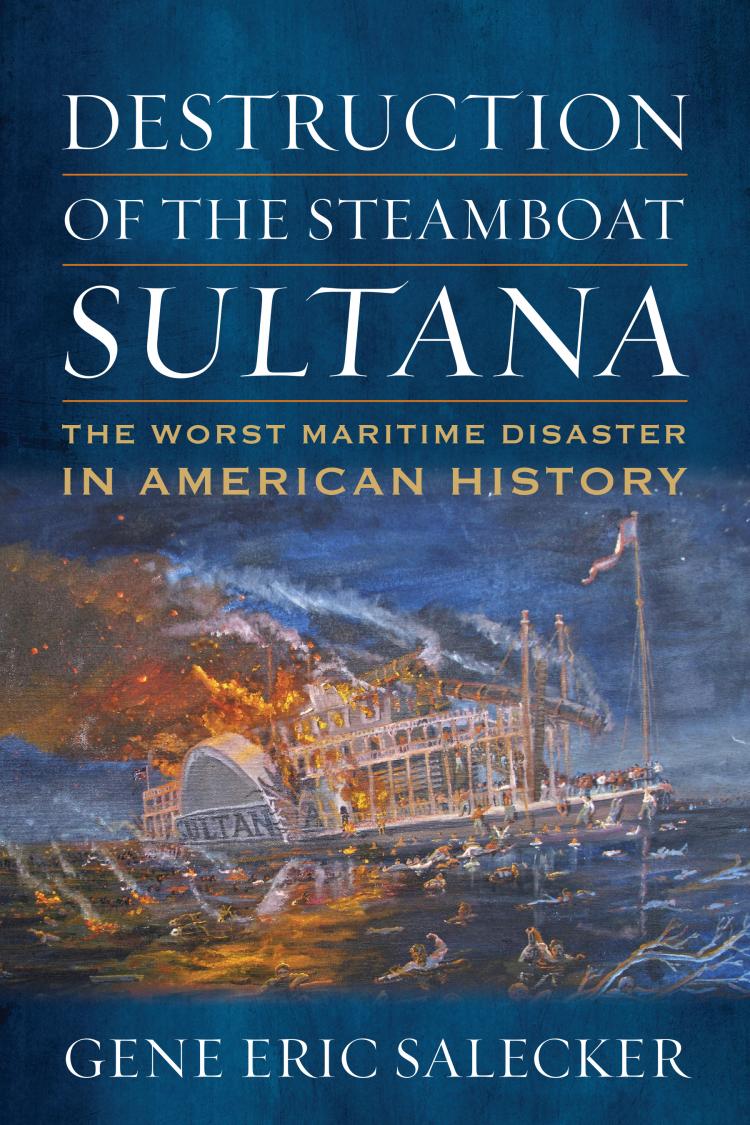 Destruction of the Steamboat Sultana

The Sultana was a sidewheel Mississippi steamboat carrying almost two thousand recently-released Union prisoners-of-war back north at the end of the Civil War. At 2:00 a.m. on April 27, 1865, when the boat was seven miles above Memphis, her boilers exploded. Almost 1,200 people perished in the worst maritime disaster in United States history.

Gene Eric  Salecker covers this disaster in detail and dispels the many myths that have been connected to the Sultana for too long. Almost every author who has written about theSultana has relied on the words of a few survivors or referred to the works of previous authors to get their story. Advancing the scholarship, the author has visited the National Archives in Washington, DC to comb through the handwritten transcripts of the three investigative bodies that looked into the disaster or poured over the handwritten testimony from the court-martial trial of Capt. Frederic Speed, the only person tried for the overcrowding of the vessel.

In 1996, after extensive research and using the most current sources available at that time, Salecker wrote Disaster on the Mississippi: The Sultana Explosion April 27, 1865. Still, there were inevitable omissions. After almost twenty-five years of continued research on the Sultana, and all those involved in the disaster, Salecker has gleaned unparalleled knowledge into every aspect of the disaster. His research, covering the National Archives, and thousands of pages of newspapers from around the world and government documents, including pension records and service records, has allowed Gene to tell the story of the Sultana as completely as possible. By bringing his research back to primary sources, Salecker dispels myths and adds to the story of the Sultana.

In Destruction of the Steamboat Sultana: The Worst Maritime Disaster in American History paroled prisoners, civilian passengers, guards, crew members, rescuers, and eyewitnesses tell their stories in their own words. The true, and complete, story about the Sultana and the disaster has finally, and fully, been told.

Gene Eric Salecker is recognized as one of the leading authorities on the Sultana Disaster and owns the largest collection of Sultana memorabilia. A retired police officer and middle school teacher, he is currently the historical consultant for the Sultana Disaster Museum, Marion, Arkansas.

“Historian Gene Eric Salecker, in his epic book, The Destruction of the Steamboat Sultana, brings to life the tragic story of the repatriated Union soldiers and crew of the ill-fated steamboat Sultana. Mr. Salecker accomplishes this through his exhaustive research of never before published letters, journals, and newspaper interviews of the survivors. The author’s keen eye for detail and artistic prose allows the reader to feel as if they are witnessing first hand our Nation’s worst maritime disaster. The Destruction of the Steamboat Sultana is destined to become an instant classic in the annals of maritime literature.” —Cdr. Dennis J. Ringle, USN (Ret.), author of Life in Mr. Lincoln's Navy

“Gene Salecker in Destruction of the Steamboat Sultana has created a historical masterpiece! Few authors have spent over forty years researching a story like Gene did. His book is the definitive work on the Sultana disaster. It is a must read for anyone who has any interest in history. ” —Jerry O. Potter, author of The Sultana Tragedy

“A highly readable and comprehensive study of the worst maritime disaster in American history. Through his exhausting investigation of primary sources from prisoners, passengers, crew members, and eyewitnesses, as well as his impressive knowledge of steamboats, Gene Eric Salecker seems to raise the Sultana from the dark waters of the Mississippi River and from history.” —Angela M. Riotto, assistant professor, U.S. Army Command and General Staff College

“In Destruction of the Steamboat Sultana, Gene Eric Salecker offers a comprehensive and … compelling account of the disaster…. The book is a must-read for Civil War buffs and those wanting to learn new details about the Sultana…. A solid introduction to an oft-overlooked piece of history.” —Associated Press

“The end result of three decades of intensive primary research, thorough investigation, and deep reflection, Gene Salecker's Destruction of the Steamboat Sultana surpasses all previous coverage of the topic and is clearly poised to become the new standard history of the tragic event and everything that surrounded it. One hesitates to declare any history book to be the last word on its subject, but suffice it to say that this rigorously comprehensive treatment of the Sultana is destined to become an enduring classic among Civil War history studies and waterborne disaster chronicles.” —Civil War Books and Authors

“Gene Eric Salecker did an outstanding job framing the tragedy, exploring the effect, and looking for the cause. The book is the result of twenty-five years of continued research. Many people survived the disaster including civilian passengers, paroled prisoners, crew members and rescuers. There were many myths that grew up around this maritime disaster. Reading the book takes us through those last fateful moments of the disaster and the tragic aftermath. We highly recommend this 528-page book to those of you who have an interest in this topic.” —Virtual Mirage

“If you want an in-depth analysis that relies chiefly on firsthand evidence, Destruction of the Steamboat Sultana is the volume to read. You will come away knowing what happened, but, more importantly, remember the people, the sacrifices they made, and their determination to survive.” —Pirates and Privateers