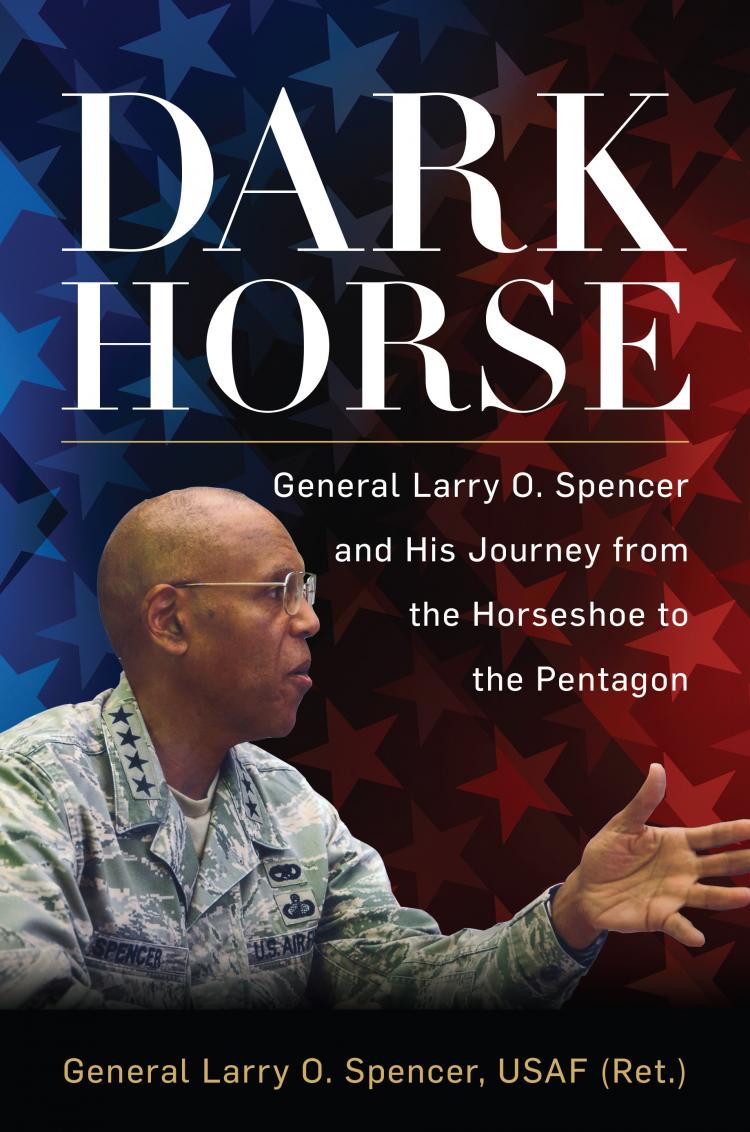 General Larry O. Spencer and His Journey from the Horseshoe to the Pentagon
By Gen. Larry O. Spencer, USAF (Ret.)
Hardcover $26.95
Member Price $21.56 Save 20%
Sign in to receive member pricing
Overview Author Reviews

Gen. Larry Spencer, USAF (Ret.) was born and raised on the Horseshoe—a tough inner-city street in southeast Washington, D.C. Both parents lived in the rural south under Jim Crow and “separate but equal” laws. Spencer’s father was a career Army soldier who lost his left hand during the Korean War, suffered from post-traumatic stress disorder, and worked two jobs. His mother completed tenth grade, had no driver’s license, and was left alone during the week to raise their six children. The Horseshoe was a hard neighborhood where fights were common, and the school systems were second-rate. The expectations of living in an all-Black neighborhood were to be good at sports while shunning academic prowess. Spencer met those expectations: he struggled in school, but teachers who did not want to see him repeat their class would pass him to the next grade. That environment resulted in poor self-esteem and a bleak outlook for the future.

Quite by chance, Spencer enlisted in the U.S. Air Force where he continued to struggle with the racial turmoil of the 1970s. A senior non-commissioned officer saw promise in Spencer and guided him to obtain a college degree and apply for Officer Training School where he excelled. As a very young first lieutenant, he was assigned to a tough job in the Pentagon, but Spencer earned an early reputation as a fast burner.

In 1990 he took command of a squadron that won accolades and awards for their performance during Operation Desert Shield/Storm. Spencer went on to serve at the White House, and then successfully commanded a Group and a Wing before being assigned as the chief financial officer (comptroller) for Air Combat Command, the largest command in the Air Force. During that assignment, Spencer was promoted to brigadier general and was tasked to set up a new Directorate at Air Force Materiel Command. Spencer later returned to the Pentagon where he led Air Force Budget. He ultimately became the Air Force’s thirty-seventh vice chief of staff, making him one of only nine African Americans promoted to four stars. Spencer concludes his historic climb with life lessons learned on his journey from the inner city to the Pentagon.

Gen. Larry Spencer, USAF (Ret.) was born and raised in Washington D.C. Spencer enlisted in the U.S. Air Force in 1971, completed his bachelor of science degree, and was commissioned as a second lieutenant in 1980. Spencer quickly climbed the ranks, culminating as the 37th Vice Chief of Staff of the Air Force. He then became President of the Air Force Association and he is now president of the Armed Forces Benefit Association/5Star Life Insurance Company.

“Larry Spencer’s Dark Horse chronicles the improbable journey of a Black kid from the ‘hood' who grew up to be one of the most senior four-star generals in the U.S. Air Force. Though he began life with low self esteem on a playing field tilted against African Americans, Spencer shares experiences and lessons learned that helped him to overcome setbacks and achieve greatness. Inspirational, practical, and uplifting–everyone can learn valuable life lessons from this man of many firsts.” —Deborah Lee James, 23rd Secretary of the Air Force, author of Aim High: Chart Your Course and Find Success

“For forty-four years, Larry Spencer left his leadership imprint on our Air Force and everyone he met. Now Dark Horse allows an even broader audience to learn from this remarkably successful, positive, humble, caring leader. A truly inspirational read!” —Gen. Martin Dempsey (Ret.), 18th Chairman of  Joint Chiefs of Staff

“America the beautiful, is the land of opportunity. However, for Black and Brown Americans the road to success is far more difficult. Dark Horse chronicles the struggles and challenges of a poor inner city youngster who climbed to the top of his game. General Larry Spencer refused to give up or give-in to those challenges. He did not curse the darkness, he lit a candle to created light for a path to success. Dark Horse pulls the curtain back for all to see the ugly and bright sides of America and how this extraordinary American blazed a path to success that created a roadmap for others to follow. A timely book and a must read!” —Gen. Lloyd “Fig” Newton, USAF (Ret.), first African American pilot in the U.S. Air Force Thunderbirds

“Larry Spencer has been a true leader in his life’s work-making our Armed Forces stronger and more effective. Dark Horse shares the secrets of his success: his dedication to duty and his innate decency. His life is a valuable lesson for us all as we work to make America the best it can be.” —Sheryl Sandberg, chief operating officer (COO) of Facebook, founder of Lean In and Option B

“General Spencer’s book is not just an incredible story of inspiration but a story of life and all its contradictions. Bias, racism, unfairness and decency, honesty and respect. There are many important lessons to be learned throughout the General’s story. You will be very glad you read this book.” —Chuck Hagel, former Secretary of Defense, U.S. Senator, Vietnam Veteran

“General Larry Spencer left his mark on the United States Air Force and now he does so again with this timely, relevant, and extremely important book which also provides a needed addition to USAF history. General Spencer has written an earnest and intimate portrait that covers valuable perspectives from both his enlisted and officer career. Detailing issues of racial strife, overcoming adversity, and filled with lessons in leadership, Spencer writes with ineffable grace, wit, and charm. Leaders at all levels and should read this book, to steal a phrase from General Spencer with "eagerness and enthusiasm.” —Brian D. Laslie, command historian at United States Air Force Academy

“In the Black Lives Matter era, General Spencer’s memoir is timely and instructive. His vivid prose puts the reader at his side, watching events through his eyes as he experienced a wide variety of situations. His achievements in overcoming negative peer pressure, low expectations, racial stereotypes, and discrimination can serve as an inspiration for many Americans.” —Paul Stillwell, editor of The Golden Thirteen: Recollections of the First Black Naval Officers

“General Larry Spencer is one of the most remarkable officers I have known in my 43 year career. His service to our country was extraordinary, culminating in a four-star assignment as the number two officer in America’s Air Force. His story of success defied the odds and his journey out of 'The Horseshoe' in southeast Washington D.C. is compelling. His fortitude and his family are riveting. This narrative is that much more important in these tumultuous times where race and our own reconciliation with it will create our children’s future. Larry Spencer’s life story is an important milestone on that road. His example and grit are special in every way. Please read this book. It will move and inspire you.” —Adm. Mike Mullen, U.S. Navy (Ret.), 17th chairman, Joint Chiefs of Staff

“Some books are truly inspirational. That’s because the characters in them touch your heart and move you to action. I would rate Dark Horse by General Larry O. Spencer, USAF (Ret.), as one such book…. General Spencer writes with a lot of candor on how he coped with difficult and challenging situations in his career. Needless to say, many of them were because he was an African-American. More than the high command positions he held or his professional achievements, laudable as they may be, the book’s value lies in our understanding of General Spencer as a person. We see how he succeeded against the odds. We marvel at the way he emerged to be the dark horse in horse parlance. And, last but not the least, General Spencer leaves us with a crisp summary of his life lessons, which are invaluable. Overall, an inspirational book about an officer and a gentleman.” —Prem Rao : Stories from a Story Teller

“Larry Spencer is a remarkable person on several counts. To those of us on the lower rungs of society, he made it from the hood to flag officer in the U.S. Air Force (USAF). To those in the USAF he made it to four-star generalship not by being a fighter pilot (the regular route), or even by being a pilot (my Lord!)—but by being a financial analyst (What?). To most of us he is what we all work to be—honest, hard-working, intelligent, and knowing full well he got where he did with the help of others. A humble, intelligent, dutiful person not likely to be heard of by most of the population—unlike too many of those over-the-top reality show characters with their broken personalities which are entertaining if you are not having to live or work with them. It is a real person like General Larry Spencer (USAF, Ret.), who should be lauded and emulated and this autobiography is an excellent, as well as enjoyable, way to make a better life through clear thinking, family, and wise people who freely give their time.” —Travel for Aircraft

“Larry Spencer’s Dark Horse: General Larry O. Spencer and His Journey from the Horseshoe to the Pentagon is aptly named. A dark horse is a little-known person who succeeds in an unlikely situation…. Although Spencer sees himself as a dark horse, I see him as a workhorse, a hard-working man with a very supportive wife and family. Reading Spencer recounting the backstories of his life was enjoyable and inspiring. While he knows he worked hard to reach a high level of success, he gives much credit to his family and to military support personnel, mentors, and the Air Force itself. I highly recommend Dark Horse.” —The VVA Veteran

“General Spencer’s autobiography is a work that is simultaneously a very readable history of one man and his times, a portrayal of personal and professional triumph despite inauspicious beginnings, a window into the non-flying but vital supporting infrastructure of the Air Force, and a treatise on effective leadership. Despite achieving that rarest of achievements, four-star rank, Spencer seems a humble man, not corrupted by the trappings of power. The book is end-noted, has a bibliography, includes several photographs, and is highly recommended.” —The Journal of America’s Military Past

“The book is an unusual biography of a person who managed from very humble and disadvantaged origins up to the role of Deputy Chief of Staff of the USAF, investing in values such as kindness, which appears visible throughout the book, the family, which supports him through his beloved wife Ora and children, the intelligence and competence that have earned him all that he has deserved. And all this against an environment that has certainly evolved but which initially had enormous disadvantages. A parable of life that can teach a lot to many.” —On the Old Barbed Wire

"Overall, I would recommend Dark Horse General Larry O. Spencer and His Journey from the Horseshoe to the Pentagon. It gives the reader an inside glimpse into the life of an incredibly successful leader and the lessons learned from that life. Unlike the memoirs of many former military leaders in which the authors seem to inflate aspects of their life artificially, this book is written in a humble and down-to-earth way. This humility gives extraordinary credibility to the book’s life lessons." — Air University