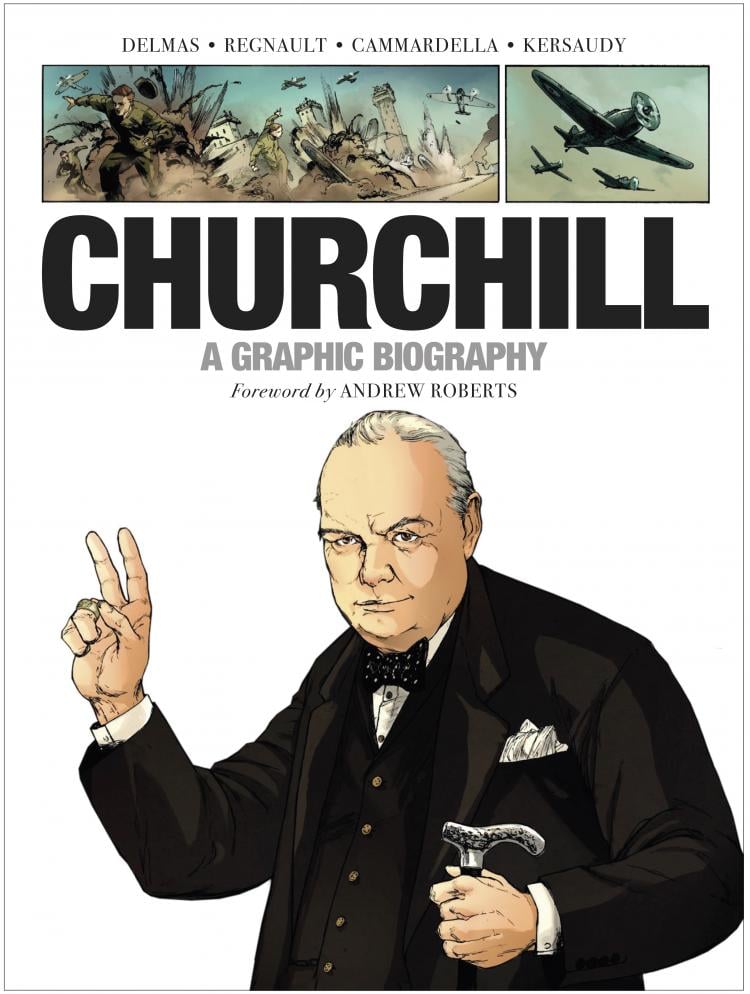 Sir Winston Churchill is often referred to as the greatest Briton and is certainly one of the most important and central figures of the 20th century. Containing both his many pitfalls and triumphs, this graphic biography follows Churchill’s upbringing, through his military exploits in World War I and beyond.

Best known for his role in the World War II, Churchill presents the Prime Minister’s part in this world-changing conflict and how his handling of it turned him into a political icon.Leading Churchill historian Andrew Roberts contributes additional insight in the foreword and historian François Kersaudy provides a new English-language introduction to provide greater background and supplementary knowledge.

Churchill is a unique depiction of the life of Winston Churchill that places his story in the context of the times while enabling the reader to truly visualize the key moments in his life and career.

Vincent Delmas writes for television, film, and comics. Notably, he is co-author of Charlemagne in the collection Ils ont fait l�Histoire and scriptwriter of the series Synchrone, published by Lombard.

Andrew Roberts is a British historian and journalist. Born in Hammersmith, he studied Modern History at the University of Cambridge, before working in corporate finance after his graduation. Roberts published his arst historical book, a biography of Edward Wood, in 1991. His analyses and revisionist approaches to history instantly won him praise and critics alike, and he won the Wolfson History Prize for Salisbury: Victorian Titan (1999).His modern works have focused on World War II figures, and his work was the basis for the BBC series Hitler and Churchill (2013). He won the 2010 British Army Military Book of the Year for The Storm of War: A New History of the Second World War (2009) and the Prix du Jury des Grand Prix de la Fondation Napol�on in 2014 for Standpoint.

“A wholly original and fresh approach to historical biography. Churchill would have been delighted to be a comic book hero!” —Phil Reed, Emeritus Director, Churchill War Rooms

“A novel and riveting re-telling of the Churchill legend.” —Professor Gary Sheffield, author of Douglas Haig: From the Somme to Victory

“Churchill: A Graphic Biography is fantastic. It's informative while being engaging with the writing and artwork working in perfect unison. I would recommend giving it a read for sure if you want to learn about Winston Churchill in a unique manner compared to the all-prose biographies of him.” —The Newest Rant

“The artwork is very good, in a traditional comic book style, and helps tell the story cleanly, whether personal, political or military . . . . The book is an excellent overview of the highlights of a life and career.”—ICv2

“Introduced by Churchill biographer Andrew Roberts, this beautiful illustrated history is a novel guide to the totemic leader for readers young and old.” —Military History Matters

“Churchill is a well-done biography. Presented in the graphic novel format it offers a different perspective of Winston Churchill’s life. Regault and Dalmas capture Winston Churchill as one of the most important democratic leaders of the twentieth-century. He not only saved Great Britain, but he saved the entire world from falling to Nazi Germany.” —Popanimecomics

"A full and wholly fair representation of the most adventurous life in the history of British politics..there is not a word I would have changed in the text of this excellent graphical account" —Andrew Roberts

“A highly original approach, using the comic strip style to tell his story. With magnificent artwork and a lively text, and a foreword by the historian and biography Andrew Roberts, it captures all the drama and excitement of his long life up to the victory over Nazi Germany” —Leo McKinstry, author of Attlee and Churchill

“Employing the comic book format, it is a wonderfully illustrated and scripted biography that traces episodes of Churchill’s life from his childhood to VE-Day in 1945. It is an entertaining and delightful book that will well-serve both new and accomplished readers of Churchill biographies.” —A Blog on Winston Churchill

“If you are a fan of this historical figure, then this is a graphic novel you will want to read.”  —The Good Men Project

“England’s best-known prime minister, already the subject of more than a thousand books, would have surely enjoyed the latest: Churchill: A Graphic Biography.” —Seattle Book Review

“Complex enough for adults seeking entrée into the Churchill mystique while also great reading for historically minded teens down through middle-schoolers.” —Library Journal

“Ever wanted to learn about Winston Churchill? Churchill: A Graphic Biography walks you through the basics of what you want to know and is a good place to start to learn about this major historical figure.” —Graphic Policy

“Churchill: A Graphic Biography is of great value for introducing young adults to the man, but older readers, even those well versed in Churchill’s life, will likely find it interesting.” —StrategyPage