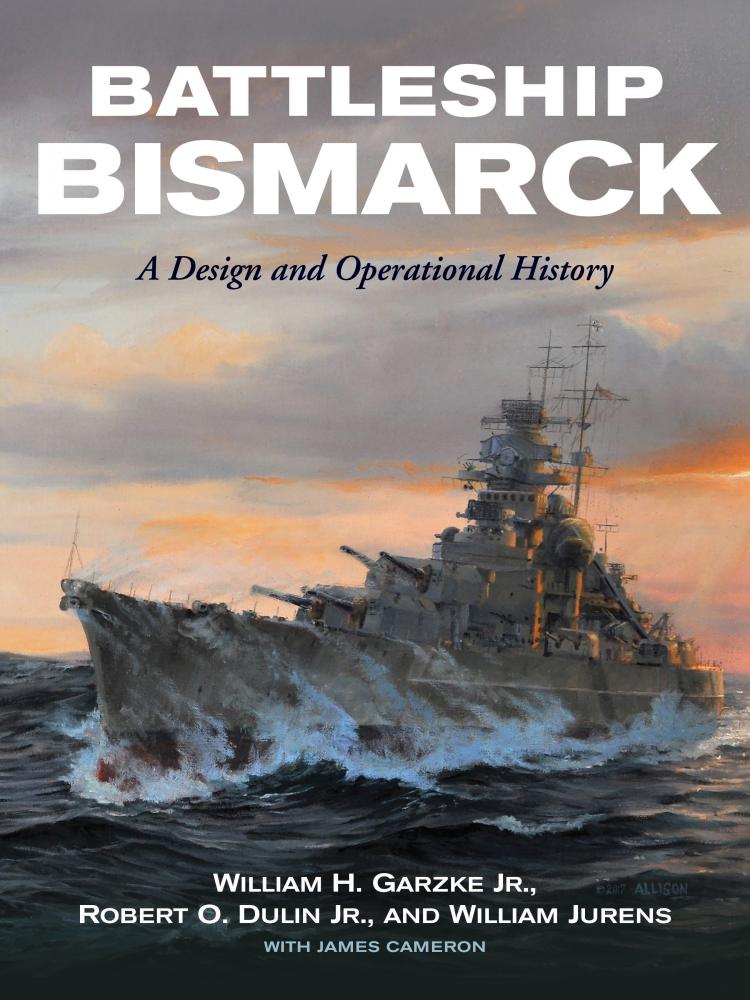 Drawing on survivors' accounts and the authors' combined decades of experience in naval architecture, Battleship Bismarck is a marine forensics analysis and engineering study of the design, operational career, and loss of Germany's greatest battleship. This investigation is the result of fifty-six years of painstaking research, during which the authors conducted extensive interviews and correspondence with the ships' designers and survivors of the Battle of Denmark Strait and Bismarck's final battle. Albert Schnarke, former gunnery officer of DKM Tirpitz, sister ship of Bismarck, aided greatly by translating and circulating early manuscript materials to those who participated in the design and operation of Bismarck. Survivors of Bismarck's engagements actively contributed to this comprehensive study, including Vice Admiral (then Lieutenant) D. B. H. Wildish (RN), damage control officer aboard HMS Prince of Wales, who located photographs of battle damage to his ship.

After the wreck of Bismarck was discovered in June 1989, the authors served as technical consultants to Dr. Robert Ballard, who led three trips to the site. Filmmaker and explorer James Cameron provides a comprehensive overview of his deep-sea explorations of Bismarck, illustrated with his team's remarkable photographs of the shipwreck.

The result of these nearly six decades of research and collaboration is an engrossing and encyclopedic account of the events surrounding one of the most epic naval battles of World War II. Battleship Bismarck has finally resolved some of the major questions such as: Who sank Bismarck, the British or the Germans?

William J. Jurens spent his working career teaching engineering graphics at the university level, and currently serves as an associate editor for Warship International. He is an active member of the renowned Marine Forensics Committee of the Society of Naval Architects and Engineers, along with its co-founder, Mr. Dulin and co-founder and current co-chair, Mr. Garzke.

William H. Garzke Jr. is a graduate of the University of Michigan with a degree in naval architecture and marine engineering and earned his master's degree in applied mathematics from Adelphi University.

ROBERT O. DULIN JR. is a 1961 graduate of the U.S. Naval Academy who earned his MS in naval architecture and marine engineering from MIT. Mr. Garzke and Mr. Dulin co-authored the classic Battleships trilogy dedicated to the battleships of World War II. He lives in Dumfries, Virginia.

"This comprehensive account of the birth, short life and death of the German battleship Bismarck is truly outstanding. The authors' indefatigable researches and forensic analysis, extending over decades, have resulted in an impressive account of unsurpassed detail and supporting illustrations." —Ian Buxton, Naval architect, Newcastle University, co-author of The Battleship Builders

"This is an epic book to match one of the epic episodes of sea combat. It is a blockbuster to match the high drama and horror of battleship Bismarck's short, but eventful life and brutal demise at the hands of a sorely aggrieved Royal Navy. A formidable A-team of authors have produced a forensically technical and visceral triumph." —Iain Ballantyne, author of Killing the Bismarck and Bismarck: 24 Hours to Doom; Editor of WARSHIPS International Fleet Review magazine

"The authors use their naval architecture experience to create a unique, comprehensive account of history's most famous battleship. The story of her design, construction, history and death are described in engaging detail. Finally they provide the answer to the question, was she scuttled or did the British sink her?" —John Vasilakos, Senior Naval Architect, Society of Naval Architects and Marine Engineers (SNAME) Marine Forensics Committee

“A fabulous title. It’s just so well written. Every element of it is outstanding. From the accounts, from the depth of the research, to the readability, to the presentation, to the whole quality of every element of this title. I cannot speak highly enough of it.” —Scale Modeling Now

“The authors, William H. Garzke Jr., Robert O. Dulin Jr., and William Jurens have written the definitive history of the legendary German battleship. This is more of an adventure than it is a book…. This is truly a masterpiece.” —Defense.info

“I recall seeing a fantastically illustrated Gutenberg Bible and to me it was elegant. The history of the work was epic, the effort that went into the creation of document and its illustration was magnificent. I felt much the same way when I turned the pages of Battleship Bismarck: A Design and Operational History. And while it is not the Gutenberg Bible, it might well be considered to be the Bismarck Bible, meticulously researched, magnificently printed, and glorious in its illustration and in the vast selection of historical photographs which document possibly the most famous battleship in history.” —Virtual Mirage

“Messrs Garzke, Dulin and Jurens have produced a truly incredible piece of work. Their book looks at more than just the metal, but takes us to the people, leading actors or bit part players in the Bismarck story; who all have an important place…. The attention to detail of the authors is most impressive. They clearly love their subject, but the battle is presented with objectivity as well as a sense of quiet passion. They seek to tell us about every facet to ensure the complete story is told, not just a simplistic account…. Very highly recommended.” —War History Online

“James Cameron provides a comprehensive overview of his deep-sea explorations of Bismarck, illustrated with his team’s remarkable photographs of the wreck. If you are a fan of the Bismarck, then this is a book for you.” —Sea Classics

“The book by Garzke et al. is a massive book that was nearly six decades in the making. It is a complete operational history of the Bismarck, well-illustrated with period photos but also with underwater photography of the wreck, allowing a forensic analysis of the damage.” —Seapower

“The format and production quality of the book are very high. The glossy pages provide for very clear photographs in colour and black and white, which are distributed generously throughout the book. Chapter numbers and headings have stylized ship silouettes. Many tables, maps, and course plots accompany the text. The comprehensive 20-page index is impressive in detail and scope, and very well-laid out for reference purposes. Battleship Bismarck is a heavy book both by weight and serious content.” —The Northern Mariner/Le marin du nord

“This book will be of interest to ... naval enthusiasts and will be an important addition to their libraries.” —Nautical Research Journal

“This unique, comprehensive, and definitive account of Bismarck is both an encyclopedic and engrossing account of the events surrounding one of the most epic naval battles of World War II. The authors’ combined decades of experience in naval architecture and command at sea and meticulous research are unmatched in offering a forensic marine analysis of the design, operation, and loss of this ship. The sobering oral histories of the survivors add a great deal to the documentary research. The photographs in color and monochrome are distributed generously throughout the book, and James Cameron’s contributions make this an unsurpassed account.” —Naval Historical Foundation

“Battleship Bismarck will be a standard in maritime technology and history for years to come.” —Technology & Culture