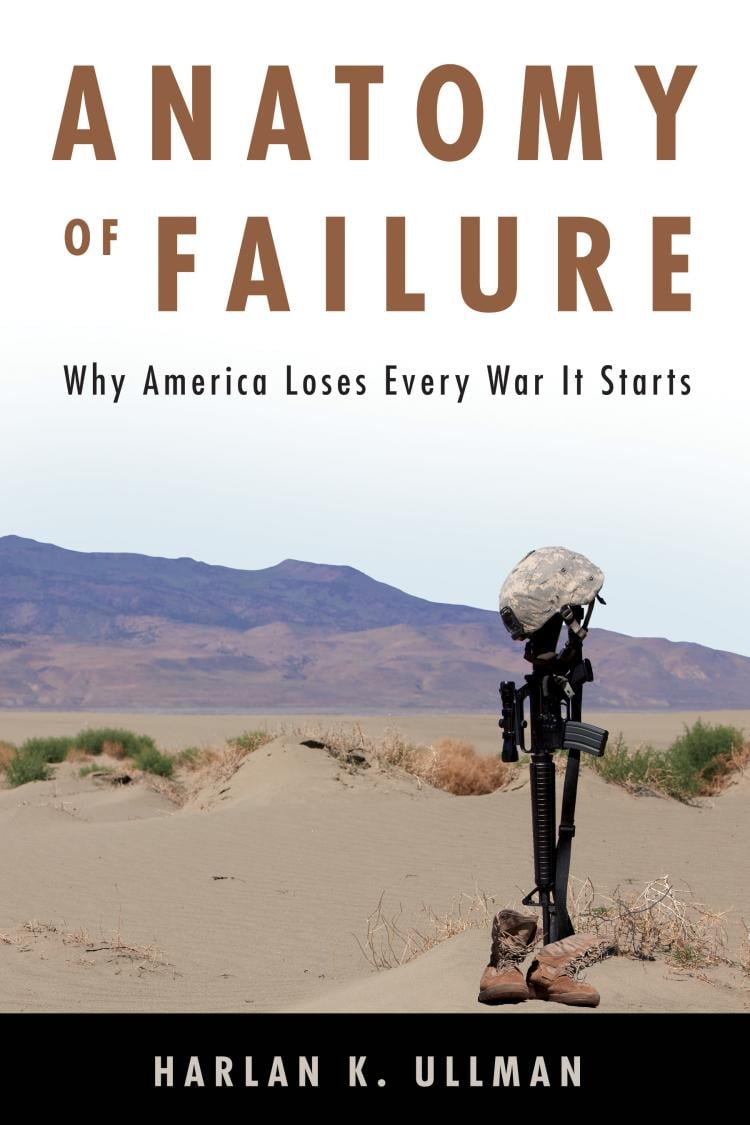 “This book should be read by all practitioners and serious students of national security as the guide for avoiding failures and miscalculations in using American military power.” —Gen. Colin L. Powell, USA (Ret.), Chairman of the Joint Chiefs of Staff (1989–1993) and 65th Secretary of State

Anatomy of Failure is part Von Clausewitz, part Tom Clancy, with personal insights by Harlan K. Ullman that brilliantly translate why the United States, the most powerful nation on earth, has so often fallen short of its objectives. —Michael Lord Dobbs, creator of the series House of Cards

Why, since the end of World War II, has the United States either lost every war it started or failed in every military intervention it prosecuted?

Harlan Ullman’s new book answers this most disturbing question, a question Americans would never think of even asking because this record of failure has been largely hidden in plain sight or forgotten with the passage of time.

The most straightforward answer is that presidents and administrations have consistently failed to use sound strategic thinking and lacked sufficient knowledge or understanding of the circumstances prior to deciding whether or not to employ force.

Making this case is an in-depth analysis of the records of presidents from John F. Kennedy to Barack Obama and Donald Trump in using force or starting wars. His recommended solutions begin with a “brains-based” approach to sound strategic thinking to address onne of the major causes of failure ----the inexperience of too many of the nation’s commanders-in-chief. Ullman reinforces his argument through the use of autobiographical vignettes that provide a human dimension and insight into the reasons for failure, in some cases making public previously unknown history.

The clarion call of Anatomy of Failure is that both a sound strategic framework and sufficient knowledge and understanding of the circumstance that may lead to using force are vital. Without them, failure is virtually guaranteed.

Harlan K. Ullman is a strategic thinker and innovator whose career spans the worlds of business and government. Chairman of several companies and an advisor to the heads of major corporations and governments, he was the principal author of �Shock and Awe.� A graduate of the U.S. Naval Academy, he served in combat in assignments in Vietnam. He holds an MA, MALD, and PhD from The Fletcher School of Law and Diplomacy at Tufts University and lives in Washington, D.C.

“Anatomy of Failure deserves our close attention ... for the fact that it invites us to re-interrogate the meta-strategic armature that underwrites the US strategic-military posture. In this sense, it represents a sincere call to reshape the US strategic-military establishment in a manner that will best serve the interests of the country in the twenty-first century.” —Journal of Indo-Pacific Affairs

“Anatomy of Failure is imbued with the wisdom that comes with hindsight of an engaged scholar-statesman-warrior and provides a thought-provoking alternative to the seemingly patchwork approach when placing the U.S. Armed Forces in harm's way.” –Military Review

“Anatomy of Failure is an exemplary review of the decision making process used by successive U.S. administrations beginning with the Vietnam War. Deeply personal while simultaneously broad in scope and concise in narrative, this sidelong eyewitness insight into national decision making is a must read for anyone interested or participating in the grand strategy of statecraft.” —On Point: The Journal of Army History

“The book's outstanding feature is its inclusion of dialogues among the author and presidents and members of the foreign-policy complex. Ullman is not afraid to mince words; he offers well-researched assessments that discomfort cliche-spouting authorities.” —Foreword Reviews

“Ullman's thesis can be boiled down to one phrase: too much muscle; not enough thinking. He recommends a 'brains-based' approach. That would be a good place to start. Intelligent volunteers should begin by reading his book.” —Financial Times

“In calling attention to a significant issue that US leaders and the American public need to face much more squarely, Anatomy of Failure makes a meaningful contribution to an important national discussion.” —Modern War Institute at West Point

“[Anatomy of Failure] should be read together with the recently released ... Why Vietnam Matters by Rufus Phillips.” —Baird Maritime

“[A]ny and all leaders and students of national security will benefit greatly from this book. Indeed, to reinforce the recommendation of Messrs, Powell, Kerry, and Jones, read this book! And, as Lord Dobbs adds, this is a very good and intriguing read as well.” —Naval War College

“Anatomy of Failure is a must-read for anyone concerned about the future of U.S. leadership.” —The Huffington Post

“Ullman's book is an important corrective to the American triumphalism that continues to dominate US political discourse. For the world's best military and all its partners, Anatomy of Failure should serve as a vital warning klaxon.” —Survival

“Clearly, the debate over how America should conduct itself on the world stage is far from over. Those seeking to understand the many sides of that debate would do well to peruse the meditations of Kaplan, Abrams and Ullman.” –The National Interest

“This is an extremely important book and should be core reading for all those working in defence and security and making and taking the decisions necessary to guide our nations through this period of radical uncertainty.” –The NAVY Magazine

“Ullman's 'brains-based approach' to warfare might not be adopted, but it poses questions that political and military leaders advocating future operations will need to answer. With Anatomy of Failure on their bookshelves, they will have been warned that if they neglect to scrutinize intelligence, analyze the enemy and identify aims, they may start yet another war that America is destined to lose.” —Asian Affairs

“When former Secretaries of State General Colin Powell and John Kerry and former Supreme Allied Commander Europe Marine General Jim Jones... call Harlan Ullman's Anatomy of Failure a must read, people should pay attention. And for those who worry about policy books being boring, in another blurb, House of Cards creator Lord Michael Dobbs deems Anatomy a combination of best selling thriller novelist Tom Clancy and Karl von Clausewitz. All are correct.” —General The Lord Richards

“From the day he put on the uniform of the United States Navy through the present, Harlan Ullman has spent a lifetime living, making, and evaluating America's national security policy with a critical eye and an insightful mind. It's taught him to ask tough, provocative questions, even unpopular questions, and whether you agree or disagree with all of his conclusions, there's no denying that his rigorous intellectual process is a meaningful contribution to the national dialogue. Every question he asks is one that should be asked and answered, however imperfectly, before our country jumps in or backs in to another military intervention, especially in an increasingly complex world of non-state actors, shifting alliances and emerging power centers.” —John F. Kerry, 68th Secretary of State

“Harlan Ullman's Anatomy of Failure is a tour d'force and a must read not only for senior politicians and government officials. All concerned citizens worried about their future safety and security and what should be done to protect both need to learn from this brilliant book. Using America an example for why nations lose wars and fail in using military force, Dr. Ullman identifies two fundamental reasons that explain why. In every case of failure, the U.S. and other nations did not exercise sound strategic thinking and judgment. Second was the failure to understand fully the situations in which force was being used and the lack of knowledge to inform good judgment. Unlike many books, this one is highly prescriptive in its innovative and intellectually rich recommendations to avoid future failures. As the world comes to grips with the increasing threat of terrorism with global reach, Anatomy for Failure should be the textbook for governments and publics in defeat this new and highly contagious danger.” —Shaukat Aziz, former Prime Minister of Pakistan and Finance Minister of Pakistan

“Harlan Ullman's latest book is one of the most insightful assessments of modern U.S. military history. I highly recommend this book to presidents, policymakers, and the public alike as it recalls the lessons from our nation's cautionary tales and guides us toward a safer, more peaceful future.” —Gen. James L. Jones Jr., USMC (Ret.), former Commandant, U.S. Marine Corps; Supreme Allied Commander Europe; and National Security Advisor

“America's military remains the finest in the world. Yet, our warfighting successes may not be in keeping with our military's preponderant superiority. In Anatomy of Failure, Harlan Ullman draws upon years of inimitable insight and access to succinctly explain why: the faults lie not in the Pentagon but in the White House. This contentious and stimulating book offers an important perspective and should be on the must-read list of elected officials on both ends of Pennsylvania Avenue.” —Mary Beth Long, former Assistant Secretary of Defense for International Security Affairs and chair of NATO's High Level Group

“Well-worth reading for anyone interested in geopolitical policy and military science. This book deserves to be a standard text in both undergraduate and graduate political science courses. It is the best I have seen of its type. Before determining why we do not win, we need to know what we have done that made us lose.” —Fabius Maximus

“Ed Marolda has edited a outstanding work by several authors who are all experts in their field. It is full of factual detail and careful analysis that makes use of the most recently de-classified documents and the opinions of men who were there at the time. It provides the wider picture that complements the history of RAN warships that served alongside their USN allies in the Vietnam War and does so in a way that is both stimulating and of absorbing interest. I thoroughly recommend it.” —The Australian Naval Institute