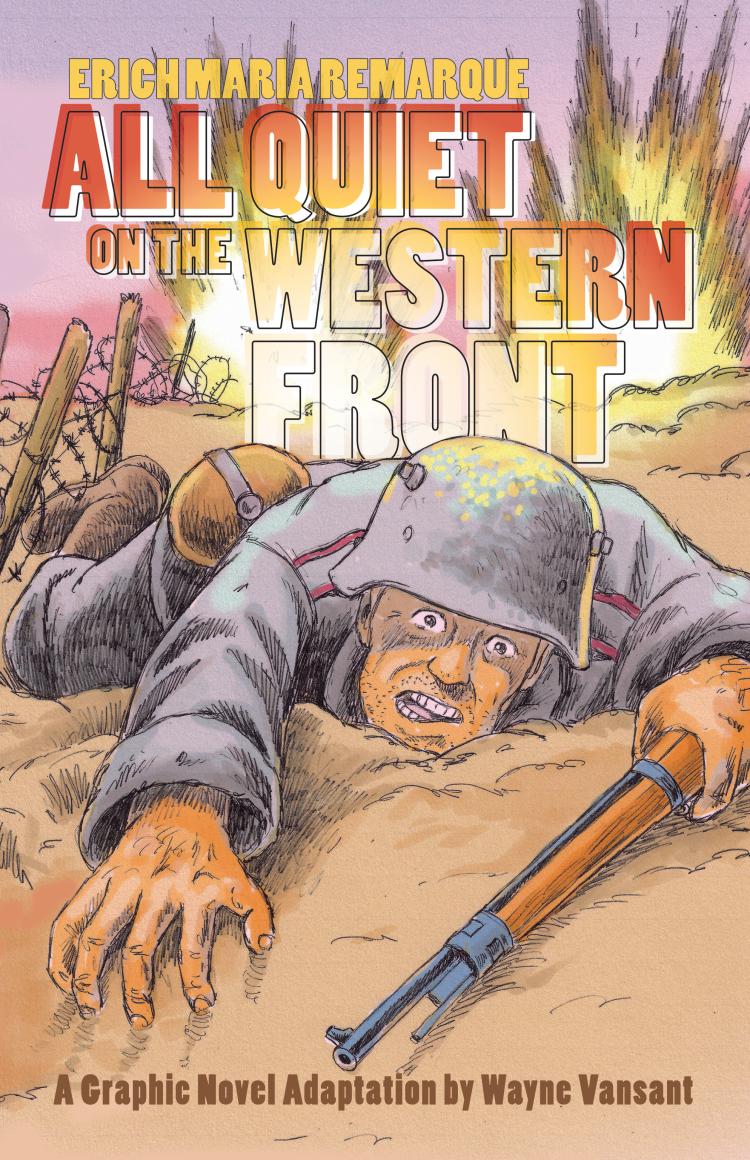 All Quiet on the Western Front

Hailed by many as the greatest war novel of all time and publicly burned by the Nazis for being “degenerate,” Erich Maria Remarque’s masterpiece, All Quiet on the Western Front, is an elegant statement on a generation of men destroyed by war.

Caught up by a romantic sense of patriotism and encouraged to enlist by authority figures who would not risk their lives to do the same, Paul Bäumer and his classmates join the fighting in the trenches of the Western Front in World War I. He is soon disenchanted by the constant bombardments and ruthless struggle to survive. Through years in battle, Paul and those he serves with become men defined by the violence around them, desperate to stay as decent as they can while growing more and more distant from the society for which they are fighting.

This graphic novel recreates the classic story in vivid detail through meticulous research. The accurate depictions of uniforms, weapons, trenches, and death brings the horrors of the Western Front to life in a bold new way.

For more than 30 years Wayne Vansant has been writing and illustrating comics and graphic novels on historic and military subjects, beginning with Marvel�s Savage Tales and The �Nam. Since then, he has produced Day so Darkness, Battron: The Trojan Woman, Blockade, The War in Korea, Stephan Crane�s The Red Badge of Courage, Normandy, Grant vs. Lee, Bombing Nazi Germany, The Battle of the Bulge, The Red Baron, and others.

“Bäumer’s story is a universal soldier’s story that sees past nationality to show how horrible the war was on everyone, regardless of side.” —Comicon.com

“The graphic novel format ... is easily readable and digestible. The adaptation is well done…. If you are not familiar with this story, I recommend this graphic novel as the way to do it. This adaptation could be well-used in a school setting to truly convey the horror of war, as opposed to just the history of it.” —Sequential Tart

“German novelist Remarque's 1928 novel introduces a motley crew of soldiers—from peat digger to postman—and then pins you to the witness stand as World War I kills them off horribly. Relentless, captivating, and iconic for conveying the tedium, brutality, and senselessness of war, the story's small triumphs, such as stealing and eating a goose, sneaking sex across enemy lines, or seeing a hated schoolmaster humiliated keep the men going. This adaptation from Vietnam veteran Vansant nails the novel's doomed fascination—of narrator Paul Baumer's original army gang, none survive. Also, the historical detail of uniforms, weapons, and settings has been well researched…. Unsparing of gross atrocities and small humiliations alike, Remarque's chronicle and Vansant's images capture the descent from idealism to frozen despair experienced by soldiers over millennia of combat. Adults and teens interested in war will learn much, in and outside of classrooms.” —Library Journal

“This isn’t a Classics Illustrated version of the story, it’s a very adult, brutal retelling. There’s bravery and cowardice, hope and fear, life and death all through the story. This book will have its place in libraries and in places where graphic adaptations of classic literature are popular.” —ICv2

“If I suddenly had universal authority, I would order every world leader, every man or woman capable of summoning an army to fight for a cause, to read this book, either in the original that was published shortly after World War I, or in this modern graphic version.  It tells a story so compelling, so necessary, about the human costs of war, that those leaders might, at least, think twice before ordering young men to lay down their lives amid the gore and senselessness of battle.” —San Diego Jewish World

“Wayne Vansant’s artwork is fantastic. You can see the love put in with each pencil stroke, and the coloring is fully-detailed…. The story is intense and will strike at your heart more than once. I highly recommend you pick up this graphic novel and give it a read. It is a true tribute to the soldiers who gave up their lives for war.” —CoolComicReviews.com