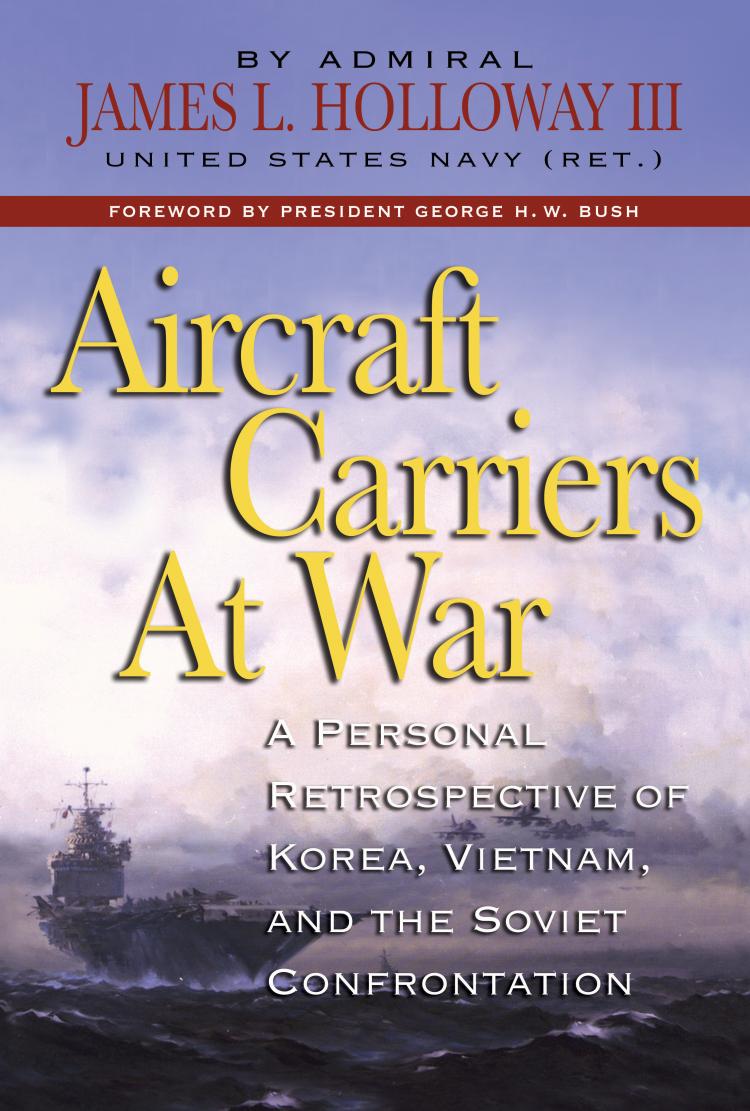 Adm. James Holloway describes this book as a contemporary perspective of the events, decisions, and outcomes in the history of the Cold War—Korea, Vietnam, and the Soviet confrontation—that shaped today's U.S. Navy and its principal ships-of-the-line, the large-deck, nuclear-powered aircraft carriers. Without question, the admiral is exceptionally well qualified to write such an expansive history. As a carrier pilot in Korea, commander of the Seventh Fleet in Vietnam, Chief of Naval Operations in the mid-1970s, and then as a civilian presidential appointee to various investigative groups, Holloway was a prominent player in Cold War events.

Here, he casts an experienced eye at the battles, tactics, and strategies that defined the period abroad and at home. Holloway's first-person narrative of combat action conveys the tense atmosphere of hostile fire and the urgency of command decisions. His descriptions of conversations with presidents in the White House and of meetings with the Joint Chiefs in the war room offer a revealing look at the decision-making process. Whether explaining the tactical formations of road-recce attacks or the demands of taking the Navy's first nuclear carrier into combat, Holloway provides telling details that add valuable dimensions to the big picture of the Cold War as a coherent conflict. Few readers will forget his comments about the sobering effect of planning for nuclear warfare and training and leading a squadron of pilots whose mission was to drop a nuclear bomb.

Both wise and entertaining, this book helps readers understand the full significance of the aircraft carrier's contributions. At the same time, it stands as a testament to those who fought in the long war and to the leadership that guided the United States through a perilous period of history while avoiding the Armageddon of a nuclear war. 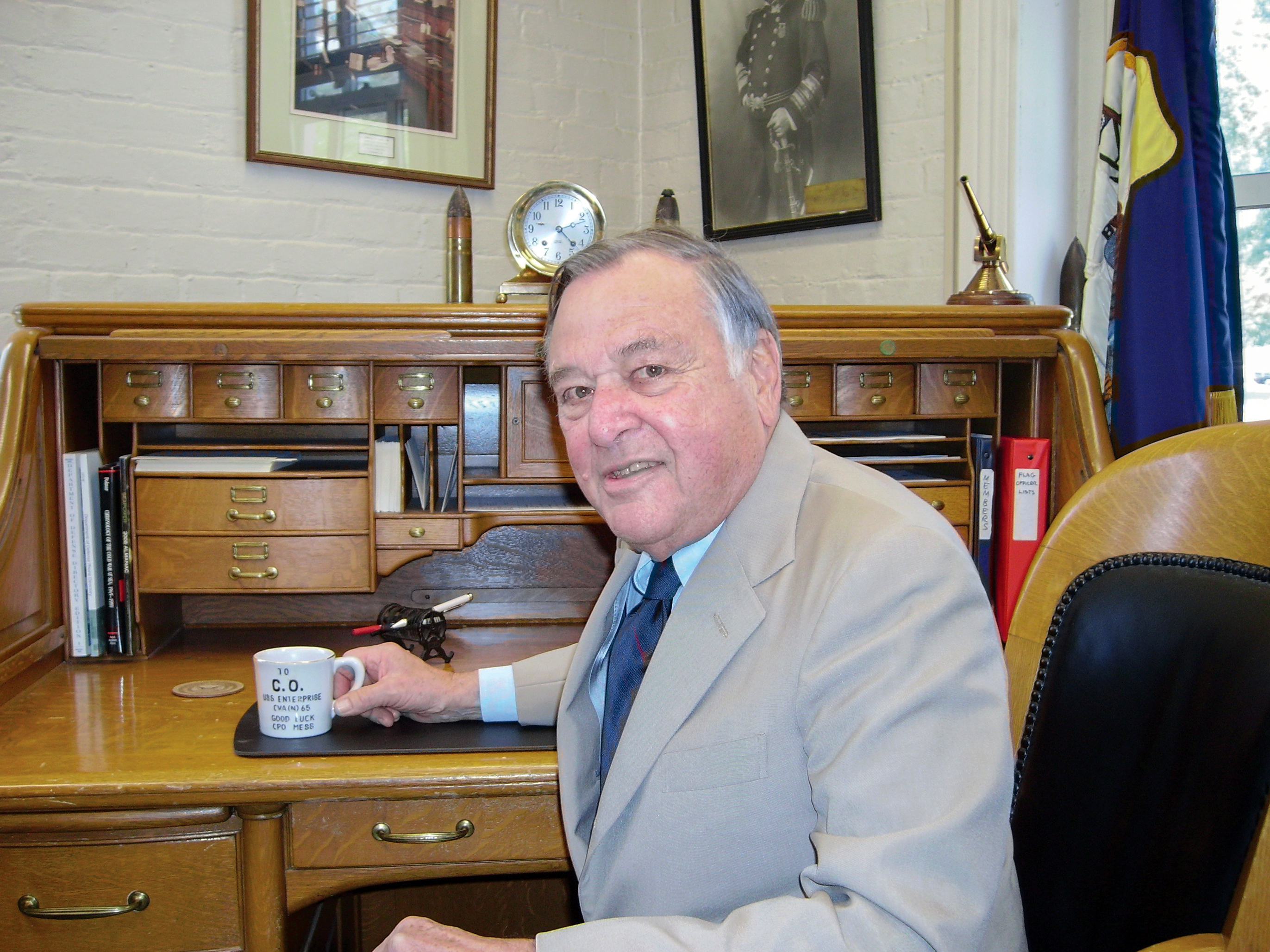 James L. Holloway III graduated from the U. S. Naval Academy in 1942 and served in destroyers during World War II, shooting down three Zeros at the Battle of Leyte Gulf as gunnery officer of the Bennion. He became a naval aviator in 1945 and flew combat missions in Korea, where he was promoted to the command of a jet fighter squadron. After nuclear reactor training under Vice Adm. Hyman Rickover, Holloway became captain of the first nuclear carrier, Enterprise, for two combat deployments to Vietnam. In 1968 he returned to the Pentagon and established the nuclear-powered carrier program. Four years later he took command of the Seventh Fleet in Southeast Asia. In 1974 he was selected as Chief of Naval Operations and a member of the Joint Chiefs of Staff. Among Admiral Holloway's more than forty medals and decorations are the French Legion of Honor, Japanese Order of the Rising Sun, Grand Cross of Germany, Knight of the Italian Order of Merit, U.S. Distinguished Service Medal, and the Distinguished Flying Cross. He recieved the Admiral of the Navy George Dewey Award from the Naval Order of the United States in 2011.

After his retirement from the service in 1978, Admiral Holloway began a civilian career in public service that included directing a presidential task force on combating terrorism and serving as a special envoy to the Middle East. Today he is chairman of the Naval Historical Foundation and chairman emeritus of the Association of Naval Aviators and the Naval Academy Foundation. He and his wife live in Alexandria, Virginia.

"Throughout the book, Holloway examines and discusses naval air power as an essential tool for American foreign policy and military operations during the Cold War. Moreover, he emphasizes the need to maintain strong and credible air power in our modern geopolitical environment. This is a valuable work for those who enjoy personal accounts of military action, as well as those who appreciate insights into foreign policy and military planning." —Vietnam Magazine

"Jim Holloway—a gifted leader, dedicated patriot, and a genuine professional—spent the bulk of his mature life in the service to the Republic and the Navy. In turn, his experience illustrates the trials and successes of naval aviation—a drama in which he played a pivotal role. It is a must read for aspiring naval aviators and for those who want the feel and smell of air warfare based on a flattop." —Adm. William J. Crowe, USN (Ret.), former Chairman of the Joint Chiefs of Staff"No one is more qualified than Admiral Holloway to write about the role that has been played by aircraft carriers in shaping America's military strength. By the time I was in government, one of the first questions raised in shaping policy during many crises was, 'Where are the carriers?' And Admiral Holloway, as Deputy Chief of Naval Operations, and later as Chief, was always there with a helpful answer. Aircraft Carriers at War is an inspiring saga of courage and leadership on the high seas and will be a valuable resource for naval historians, scholars of U.S.-Soviet strategic maneuvering during the Cold War, and anyone who enjoys an exciting and well-told memoir."  —Henry A. Kissinger, Secretary of State, 1973–77

"Throughout military history, certain weapons predominated on the field of battle. Such was the American aircraft carrier from World War II to the present. One of the Navy's great sailors, Admiral James Holloway III, skillfully weaves his own naval career with that of naval aviation, U.S. policy, and diplomacy during that turbulent era in his excellent book Aircraft Carriers at War." —Capt. James A. Lovell, USN (Ret.), Commander, Apollo 13

"Holloway is the rarest of great leaders; a man who has been tested and distinguished himself in combat in three bitter wars, WWII, Korea, and Vietnam, who has reflected deeply on those experiences, and drawn much insight and wisdom from them. He applied that judgment to help lead the nation at the highest levels during the critical phase of the Cold War. His firmness and insight in those years played a major role in bringing about eventual victory. His counsel continues to be sought by the top civilian and military leaders. Historians and a new generation of readers now have his reflections and literate commentary on those momentous times. It is an invaluable history and a gripping read." —John F. Lehman Jr., Secretary of the Navy, 1981–87

"In Carriers at War, Jim Holloway has used his own experiences in the Cold War as a framework upon which to organize the events of those turbulent and threatening years to give us a unique perspective of a critical and still somewhat misunderstood period in current American history. He puts us in the cockpit of a jet fighter attacking Chinese troops in Korea; on the bridge of the U.S. Navy's first–and then only–nuclear carrier striking deep into North Vietnam; and ultimately inside the JCS 'Tank' in the Pentagon and the NSC Situation Room in the White House for an eyewitness account of a hands-on participant. This is a special book that should appeal as much to the general reader as to Admiral Holloway's fellow campaigners of the Cold War years."— Lt. Gen. Brent Scowcroft, USAF (Ret.), former National Security Adviser to Presidents Gerald Ford and George H. W. Bush