Skip to main content
The Navy competes with academia, business, and industry for the same small talent pool. To support a diverse officer corps, the United States must do better at preparing its youth for service, providing young people of all backgrounds an equal opportunity to develop their talents.
U.S. Navy (Stacy Godfrey)

Diversity Is Not Just a Navy Issue

In the August 2022 Proceedings, Navy Lieutenant Commander Aaron Marchant authored an article titled, “Inclusion and Diversity Policy as Great Power Competition.” As a strong proponent of diversity for more than a quarter of a century, I believe the lieutenant commander seriously missed the target.

The lever of power here is diversity; inclusion is merely a characteristic that follows when we have achieved diversity. But before we can achieve diversity (or any target), we must know exactly what it is that we’re aiming for, and it is here that Lieutenant Commander Marchant missed the target. He seems to believe diversity is simply picking one from column A, one from column B, one from column C, and so on. That does little more than create the illusion of a useful diversity.

Consider this analogy. Suppose two people each want to choose ten people to form a basketball team, but they can know only whether an individual is tall or is a basketball player. If person A chooses ten tall people, the chances are good he will have a team of people with a few starters who play the game at some skill level. If person B chooses ten basketball players, she will have five starters and a bench, with individuals of varying heights, but all of whom play basketball. 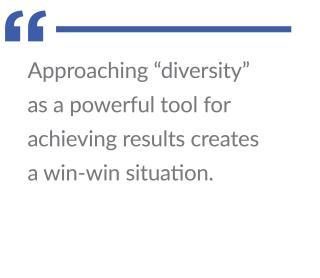 But wait, says Lieutenant Commander Marchant, the Navy does that already, and it is not visibly diverse. That is arguably true, but the question is why. Is it solely because of bias, or is there another factor? I believe there is an alternative explanation.

Person A can teach his non-basketball-playing individuals to play the game, but he will be at a serious disadvantage in competing with person B, since she can start with ten people who already have basketball skills. This squares with the observation by W. Edwards Demming, the statistical process control guru, that you can’t test in quality at the end of production; you must build it in throughout the process. In comparison with many of its socioeconomic peers, the United States performs poorly in developing its young people.

So, the Navy, as the other services, competes for the “best and brightest.” Some of those best and brightest will choose the military, but the service is playing at a serious numerical disadvantage, as there are far more colleges, universities, businesses, and industries recruiting from that same small talent pool. Even if the Navy could attract two of the best and brightest for every one attracted by each member of competition, it would gain only a paltry few. And simple demographics mean that “diverse” candidates will be a minority within that minority.

The officer corps does not reflect America at large. That is the problem at hand, but I assert that addressing the root cause is not within the military’s ability—it falls to the nation at large. Neither the Navy nor any other organization can easily develop professionals from a talent pool in which many people have, for a variety of reasons, arrived ill equipped.

University of Michigan professor Dr. Scott E. Page posits that there are different categories of diversity. The United States today is focused primarily on one category—diversity of people. People can be categorized by the ways in which they identify themselves (identity diversity) or by the ways in which they think (cognitive diversity). While these are not mutually exclusive, neither are they identical.

Lieutenant Commander Marchant proposed a Navy built around identity diversity as a way to demonstrate the “goodness” of American democracy to the outside world. However, he presents no data or analysis to support his position that other nations and peoples will actually see or care about that visible characteristic of the U.S. Navy. Certainly Russia and China criticize the United States for racism and bias, but it is almost certain they will criticize the United States for those reasons whether true or not. China criticizes the United States even though it engages in blatant bias against non-Han Chinese.

What about cognitive diversity? Professor Page has shown, both empirically and theoretically, that building a team that is cognitively diverse (assuming team members are competent in the area within which they will be working) will outperform a cognitively homogeneous team comprised of individuals who may be more expert individually. Just as choosing a potential basketball player based only on height is hard, so is choosing a cognitively diverse person simply by looking at them. The Navy needs to develop expertise in identifying cognitive diversity and putting it to work.

Professor Page also has shown that cognitive diversity is correlated with cultural, educational, religious, gender, and other life experiences/histories. That’s an interesting insight, because it means that if the Navy is successful in choosing cognitively diverse officer candidates from a well-prepared talent pool in which every American has had an equal opportunity to develop their individual talents, it will necessarily end up with an officer corps that reflects America. The Navy’s task is to learn to identify and choose cognitively diverse candidates who have shown their ability to achieve and then to develop those candidates into officers who know how to lead cognitively diverse teams. The United States’ task is to identify and a correct the root causes of unequal opportunities among the youth of all socioeconomic groups. The nation and the Navy need to develop a plan that skillfully transitions from the situation today to the future just described.

Finally, Lieutenant Commander Marchant asserts that “we must avoid the pointless political squabbles over issues like whether certain books on the Chief of Naval Operations’ professional reading list are too ‘woke.’” I agree that we should avoid pointless squabbles, but we must not arbitrarily categorize all disagreements as such. Many disagreements are serious debates. If, for example, the CNO’s professional reading list were to include The 1619 Project, then it also should include The 1619 Project: A Critique, so officers could have access to diverse viewpoints.

There has been research showing that helping people identify for themselves the need to change creates enduring change. Approaching “diversity” as a powerful tool for achieving results creates a win-win situation.

Captain Higgins is a 1969 graduate of the U.S. Naval Academy.  Following a 30-year career, he worked for Boeing as a vice president, followed by seven years of consulting. He became interested in diversity as a force multiplier after cosponsoring a seminar presented by the Santa Fe Institute.

By Lieutenant Commander Aaron Marchant, U.S. Navy
Failing to live up to its stated ideals of diversity and inclusion undercuts the Sea Services in great power competition.
P Commentary

Charting a Course to Inclusion