Skip to main content
The possibility of making the ultimate sacrifice is not reflected on enough.
Credit: U.S. Army (Elizabeth Fraser)

Leading up to my first day in officer training, I was given a copy of A Sense of Honor by James Webb. The book describes the lives of midshipmen at the U.S. Naval Academy during the Vietnam War. Webb grapples with the idea of the Academy changing from a place that trains “warriors” to one focused on creating technically and academically proficient officers.

One scene stood out for me: Photos of the men killed in Vietnam, some who had graduated less than a year before, were placed in the Rotunda, a central, sacred place midshipmen walk through on the way to their rooms or classes. The photos were a constant reminder of what the midshipmen could face after graduation, maybe in a matter of months.

For some, these men were heroes. But the main character in A Sense of Honor, a plebe, views the photos with apprehension and goes out of his way to avoid them. He thinks, “I get out of here in 1971. It won’t happen to me, it can’t happen to me. The war will be long over by 1971.”

Because of the perspectives on officer training in Webb’s novel, I asked my underclassmen mentees at the Academy to read it. I then asked, If planes were being shot out of the sky, ships were being sunk, and Marines on the ground were dying today like in Vietnam, would you still sign up to commission? In short, are you prepared to die for your country?

Often, I was met with uncomfortable looks and half-hearted answers. It seemed like the gravity of what we were signing up for had not really sunk in for many. I would venture to say only a handful of midshipmen knew any recently commissioned officers killed in training, let alone combat.

Dying for country is not often explicitly addressed during officer training. Typically, candidates are asked about sending their enlisted sailors into harm’s way or taking lives in defense of the nation. Rarely is the prospect of dying oneself seriously discussed—even in the leadership and ethics curricula.

The Navy is a dangerous place. Accidents happen: surface ship collisions, submarine casualties, aviation training accidents. Compared to the Vietnam era, however, training is markedly safer and combat deaths less common. Does this relative lack of risk mean those volunteering for service do not think about the ultimate sacrifice? If aircraft were being shot down over Taiwan in a full-scale war with China, would current candidates still sign up?

General George Patton said winning a war does not mean dying for your country but “making the other bastard die for his.” But in reality, as soon as officers take the oath, they write a check for their lives to the U.S. government.

It would be interesting to survey candidates on their first day of training at the Naval Academy, ROTC, or Officer Candidate School and ask if they would be willing to die for their country tomorrow. If they say no, a commission is not for them. Send them on their way.

This is unrealistic, of course, but it would make sense to have new officers reflect more. I was not asked explicitly during the application process to the Naval Academy, during my time as a midshipman, or during flight training if I was ready to die for my country—and why. Mentors talked about friends and colleagues who had died, and past Navy and Marine Corps heroes were mentioned, but no one asked if I was ready. 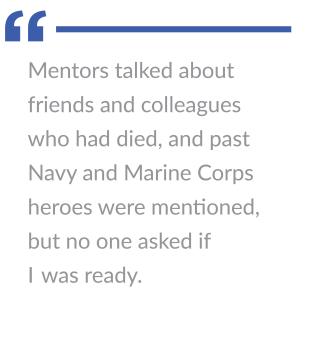 Asking this question on admission essays for officer training would be a good start. It could replace the generic “Why do you want to serve” prompt, forcing candidates to at least think about the possibility of dying for their country. In addition, the topic should be emphasized in the leadership and ethics curriculum, with a focus on serious reflection.

Finally, all officers should rewrite their “why” before they take the oath of office and at each subsequent promotion ceremony. The possibility of making the ultimate sacrifice is not reflected on enough. The Navy should not be afraid to ask new officers to consider it.

Most officers would willingly lay down their lives for their fellow Americans, but some might hesitate. Incorporating more reflection in officer training and in the fleet would ensure the Navy recruits the people it needs. This is important, as there is potential for significant loss of life in a conflict with peer adversaries such as Russia and China.

The first time to think about the ultimate sacrifice is not on the battlefield.

Lieutenant (j.g.) Bishop, a 2019 graduate of the U.S. Naval Academy, attended the Naval Postgraduate School after commissioning and earned a master’s degree in aerospace engineering. He is currently in the aviation training pipeline.

The Story Behind the Photo

Leadership Lessons from Trial by Fire

The Economics of the American Hero

By Commander Brendan Stickles, U.S. Navy
The current generation of American heroes may not look like Jack Lucas, but they can be found in similar places.