Skip to main content
For junior officers working toward their submarine warfare qualification, three pieces of advice from the “Father of the Nuclear Navy” can help smooth the path.
U.S. Navy (James Kimber)

Tips for Getting Your ‘Fish’

If you want peace, prepare for war.

A version of this Latin phrase has been used by many military giants, and it was the personal philosophy of Admiral Hyman Rickover: “The more you sweat in peace, the less you bleed in war.”

That ethos underscores the process of earning a submarine warfare qualification. Three other reflections from Rickover highlight top priorities on the path to dolphins.

• When doing a job—any job—one must feel that he owns it, and act as though he will remain in that job forever. 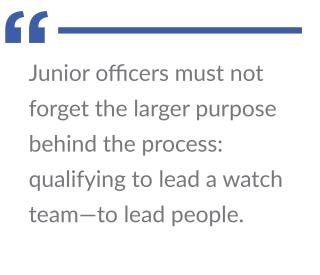 First impressions matter. Accordingly, the best initial course of action for a newly reported junior officer is to find ways to contribute—to ease the burden on shipmates—as quickly as possible. While underway, for example, a junior officer should immediately strive for commanding officer’s certification on the periscope and the Basic Officer card. This permits officers to take turns on the scope or to “verify rig for dive” (i.e., button up openings to the sea) after routine evolutions.

This might seem counterintuitive, as the “new guy/gal” will become the target for these tasks, but in the long run, it gives junior officers more time and experience around the systems that will define their submarine careers. And appreciative shipmates might be more willing to do checkouts between evolutions and meetings.

• The devil is in the details, but so is salvation.

Over a three-year tour, a submariner should expect to hear the phrases “Use the procedure” and “Show me the reference” hundreds of times. While there is no explicit checkout for junior officers or sailors to list the various references that underpin submarine operations, getting “brilliant at the basics” requires familiarity with these source documents—not just ship-generated study guides. Certain actions will require memorization, but submariners must develop the muscle memory of pulling out the base reference and skimming the unfiltered material. For more advanced problems, the difference between an expeditious, correct answer and a wrong one lies in knowing where to look for the right information.

• Human experience shows that people, not organizations or management systems, get things done.

Submarining is a social translation of highly technical material. Whether operating a nuclear reactor aft or executing peacetime or wartime tactics forward, mission success is a function of the watch team’s ability to work well together.

The nuclear propulsion program highlights seven “watchstanding principles”—including integrity, knowledge, and a questioning attitude—as the bedrock of effective operations. Honing these attributes through qualifications is important, but junior officers must not forget the larger purpose behind the process: qualifying to lead a watch team—to lead people. Through that lens, it is important to approach the senior sailors giving checkouts with humility, genuine interest in their work, and basic courtesies, such as inquiries into their personal and professional well-being. Root every interaction in dignity and respect.

At the conclusion of every “fish” board (submarine warfare qualification board) I chaired, there invariably was one final question: What does earning your dolphins mean to you? The answer always resides somewhere between the legacy of submarine veterans past—including family, friends, and eight Medal of Honor recipients—and the need to “fight the ship” when you hear two blasts on the diving alarm.

Lieutenant Howard is a graduate of the Submarine Officer Advanced Course and slated to relieve as navigator and operations officer on the USS New Jersey (SSN-796). Following graduation from the U.S. Naval Academy in 2015, she was a Marshall Scholar at the University of Oxford and King’s College London and a division officer on the USS Ohio (SSGN-726/Blue). She serves on the Naval Institute Editorial Board.

By Captain Dan Straub, U.S. Navy, and Hunter Stires
The LCS is the Navy’s solution for Chinese aggression in the South China Sea.
P Featured Article

The Myth of Maritime Counterinsurgency