Skip to main content
Leading from the front is not always the most effective strategy for unit leaders. Leading from the point of influence allows leaders have the greatest effect on the action.

Lead From the Front? Not Always

New leaders are institutionally conditioned to lead from the front. But slogans such as “lead by example,” “lead from the point of friction,” and, most prominently, “lead from the front,” can be misleading. Taken too literally, these sayings can constitute bad advice. They can cause new leaders to confuse their purpose. Should a unit leader walk point on a patrol? Should a unit leader be the one to kick in a door or be the first Marine to make entry into a hostile building? Should a leader be the first member of his unit to go “over the top,” or to cross a wide danger area under fire? Many young leaders would emphatically say yes. Experience tells us, however, they should emphatically say no.

Leaders Stay in the Fight

Marines, both leaders and followers, often are inappropriately conditioned to believe that being directly out front, in every situation, is the best way to inspire and serve their Marines. In fact, the opposite is often true. Leaders who use a sledgehammer or Halligan tool to breach a door are not in position to employ their full unit in the larger fight. For many leaders and Marines alike, this represents elitism at best. At worst, it sounds like cowardice. But leaders who inappropriately take point are taking a great risk—not merely to themselves but, more important, to their Marines and the mission.

A leader who is walking point and trips a pressure plate can get blown up by an improvised explosive device. The leader who enters a hostile building first or charges headlong across a danger area is likely to be the first Marine in the unit to get shot, wounded, or killed. Marine leaders who unnecessarily put themselves in situations to be wounded or killed are abdicating their positions of leadership. They cannot serve their Marines if they are incapacitated.

Losing a leader at a crucial moment can be a game-changer from which a unit in contact might not recover. Prior to going into combat, the Marine Corps will have invested much time and many resources into preparing its leaders to lead and employ their units. Leaders who go down by risking themselves unnecessarily have squandered all the capital that went in to their development.

They will leave their subordinates scrambling to answer crucial questions: Who is the next person in line to take charge? Is that person equipped to take charge? In the chaos of combat, does that Marine even know he or she is now in charge? Do the subordinate leaders know who is in charge? How long will it take for everyone to realize that the plan is shot, the situation has changed, and multiple people now have new responsibilities? Are these people prepared for their new responsibilities? Hopefully, the team is prepared to operate without its trained leader. If not, however, the unit will learn the hard way, and the cost of learning may be steep.

Good leaders do not expose themselves to undue risks because their units will pay the price. This is not to say that leaders should not carry themselves in a manner they would expect from their Marines, that they should not share the privations of their troops, or that they are above danger. It is right, proper, and reasonable to expect leaders to be capable of doing whatever they expect their Marines to do. A squad leader might need to fire his weapon to suppress so another Marine can move, or a platoon commander might need to fix a downed radio. But this does not mean that a leader should do everything expected of his or her Marines. 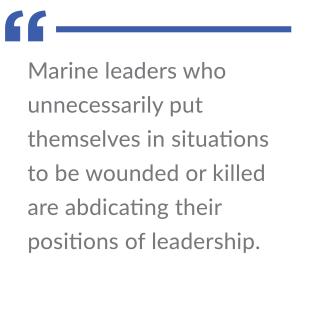 When I was a student at the Basic Officer Course at The Basic School in Quantico, Virginia, the Chairman of the Joint Chiefs of Staff, Marine Corps General Peter Pace, came to speak to the impressionable new lieutenants of my company. He told the young officers some of his experiences as a new lieutenant meeting his platoon in the field in Vietnam.

General Pace said he realized he was green and inexperienced yet placed in charge of a platoon of seasoned veterans. He wanted to earn their respect and trust. He thought he could do this by joining a working party and filling sandbags with the troops. As he talked and joked with the Marines filling sandbags, he felt he was displaying his humility. Suddenly, his platoon sergeant appeared and pulled him aside to give him some counsel out of earshot of the Marines. The platoon sergeant privately admonished then–Second Lieutenant Pace. His new platoon sergeant told him that if he really wanted to help his Marines, he would be registering on-call targets for artillery and identifying casualty evacuation landing zones. The sergeant indicated that he believed they would be hit that night. The platoon sergeant was right—the platoon did get hit hard that night. General Pace concluded that this was a tough way to learn to be a leader. Every lieutenant listening understood his point: Leaders must lead.

Lead From the Point of Influence

Just as Second Lieutenant Pace was not the best person to fill sandbags because it was distracting him from his required duty to register on-call targets, a squad leader in combat is not always the best person to carry a casualty. It is seen in training all too often and is likely to occur in combat. A squad leader gets too involved in treating a casualty and loses focus on directing his fire teams and eliminating the threat. Similarly, a platoon commander typically should not call in a nine-line casualty report. A platoon commander can, for instance, lose sight of his primary responsibility to fight his squads and get sucked into his radio to call in a nine-line at a crucial moment.

The ramifications of the lead-from-the-front mentality can be disastrous. Bad things can happen in the absence of an engaged leader. Fire teams and squads, for example, could act in ignorance of each other. One unit could fail to cover or suppress for another unit’s movement, or act without coordination, leading to fratricide. Even worse, subordinates might wait for guidance, not act at all, and fail to eliminate the threat.

To optimize the employment of their unit, leaders must be in a position that allows them to communicate to subordinate leaders and direct their actions. There are 13 Marines in a squad. There are nearly 40 Marines in a rifle platoon. The squad leader should be able to trust any of his or her Marines to move or treat a casualty. Every Marine in the platoon should be capable of calling in a nine-line request. The platoon commander should be able to hand the radio to any Marine and stay focused on the fight. To create the conditions that enable these actions in combat, leaders must train their subordinates to do these things in peacetime.

Captain Michael A. Hanson, U.S. Marine Corps, enlisted in the Marine Corps in 2003 and deployed three times in support of Operation Iraqi Freedom prior to being commissioned a second lieutenant in November 2013. As a platoon commander with 1st Battalion, 2d Marines, he led his Marines during deployments to Okinawa and Romania. He currently is an infantry instructor with Tactical Training Exercise Control Group at Twentynine Palms, California. He is a graduate of Eastern Washington University.

Own What You Control

By Master Chief Todd Coulard, U.S. Navy
Leaders at all levels across warfighting domains need to focus on owning what they control instead of controlling what they own.
P Leadership Forum

Mistakes Are Not Optional

By Commander Luke Kelvington, U.S. Navy
Leaders who address fallibility, starting with the check-in process, can help inculcate new team members into a culture willing to admit, face, and learn from mistakes.