As a results-based organization, the U.S. Navy bases its promotion considerations on the ability to get the job done, no matter the hurdles. When damaging leadership behaviors are allowed to exist in an environment that combines expansive authority over vulnerable followers and a competitive, cutthroat culture with few checks and balances, it can cultivate toxic leadership.1

Toxic leaders degrade readiness, lower organizational performance and efficiency, negatively affect retention, and can devastate subordinates’ mental health.2 There is a direct, significant relationship between subordinates’ perception of their leader’s toxic traits and how stressed they feel on the job.3 Toxic leadership also has been linked to increased subordinate cynicism and negative attitudes toward their organization.4

Worse, subordinates often feel powerless to report toxic leaders, resulting in those leaders’ continual promotion to positions with increased responsibility and authority. In a 2015 study, 91 percent of U.S. Army respondents reported personally working with or observing toxic leaders during their careers, and 73 percent reported witnessing leaders with reputations of toxic behavior being promoted.5 In that same study, 70 percent of participants had seriously considered leaving the service because of their personal experience with a toxic leader.6 With a significant gap in published Navy research on leadership, one can only extrapolate that the Army’s research extends to the Navy. 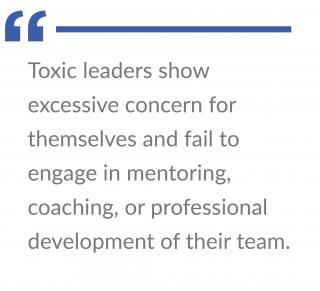 Peer-reviewed academic research clearly links toxic leadership to suicide. A toxic command climate can trigger suicidal ideation, the same as enemy contact.7 Toxic leadership is just as dangerous to the mental health of service members as experiences under fire in combat. One of these two triggers is entirely preventable. The Navy should make every effort to remediate and eliminate toxic leaders from its ranks.

For many service members, defining toxic leadership can be fluid and varied based on their perceptions of their interactions with leaders. However, as U.S. Supreme Court Justice Potter Stewart famously said about pornography in 1964, “I know it when I see it.”8

Unlike the Army, however, the Navy has neither an official definition of what constitutes a toxic leader nor any prohibition against toxic leadership behaviors. What makes a leader toxic is a combination of self-centered attitudes, motivations, and behaviors that have adverse effects on subordinates, the organization, and mission performance. To be classified as toxic, the counterproductive behaviors must be recurrent.

Toxic leaders show excessive concern for themselves and fail to engage in mentoring, coaching, or professional development of their team. They also exhibit a lack of care and respect for their subordinates and low emotional intelligence, projected as frequent emotional outbursts, a lack of self-awareness and empathy, and failure to listen to those around them. Finally, they focus on short-term results while disregarding how securing those results might affect their people.

Conversely, healthy but “tough” leaders exhibit concern for their subordinates and are approachable, supportive, and compassionate. They focus on mentorship and teaching and offer honest and constructive feedback. They exhibit high emotional intelligence as demonstrated by empathy, being calm under pressure, and seeking input from others. Finally, they focus on long-term results with a “tough but fair” approach. Research shows that exceptional leaders demonstrate high levels of empathy and self-awareness.9

The Navy needs to correct toxic leadership, so how does it do it?

The Navy needs to implement an accurate evaluation of a leader’s “competencies, behaviors, and performance outcomes,” including toxic leadership traits. A 360-degree multirater leader performance assessment can elicit unbiased feedback from subordinates, peers, and superiors and would allow leaders to identify their positive (and potentially toxic) leadership traits.10

While some warfare communities already use 360-degree assessments in specific training curriculums, rated individuals typically select who provides feedback, with inevitable bias. Similar to a command Defense Organizational Climate Survey (DEOCS), the 360-degree assessments should be open to any subordinate, peer, or supervisor.

Assessments should begin at commissioning, but no later than department head screening or detailing to substantive supervisory roles. They should continue as leaders progress through the ranks to increasing levels of responsibility. The 360-degree assessment results should demonstrate continual, positive growth throughout a leader’s career.

While receiving critical feedback can be stressful in the short term, one of two results should occur:

1. The leader dedicates himself or herself to humility by accepting the critical feedback and making a concerted effort to grow as a leader, remediate negative traits, and become more self-aware.11

2. The leader rejects the results and takes no action, thus perpetuating harmful and toxic traits.12

The 360-degree assessment includes an evaluation of individual performance outcomes, so a commander can factor behavior and competency into ranking their officers beyond simply getting the job done. The result is a greater emphasis on leaders who demonstrate effective leadership traits while also getting the job done.

Most leaders likely are oblivious to how those around them perceive their leadership style. That said, receiving critical feedback indicating toxic traits should not be a showstopper. Even leaders with a good heart and honest intentions can fall short in delivery, tone, and tact, which others might perceive as toxic.

If commanders are committed to the process, they should not offer favorable recommendations for leadership positions and promotions to those who continually receive feedback that they are toxic and fail to demonstrate change in their assessments.

One thing is clear: Traditional performance reviews with only a supervisor or commander providing feedback allow for bias and subjectivity and lack holistic feedback for improvement.13 Further, a subordinate receiving feedback solely from a supervisor can be less accepting of criticism and less responsive.14

By their nature, performance reviews are a subjective process and, therefore, allow the reviewer’s biases—implicit or otherwise—to enter the conversation. By reviewing a leader’s full body of 360-degree reviews as his or her career progresses, the Navy has a much better chance of filtering out biased reviews than it does under the current superior-subordinate appraisal process.

As leaders progress through the ranks, the Navy expects them to make decisions to ensure the safety of their crews and operations while under pressure. Leaders should think on their feet, know when to elicit input, and evaluate what is best for the organization.

Toxic leaders fail to listen to those around them, whereas healthy leaders evaluate input from others before making a decision. Constructive/development theory uses leadership development levels (LDL) to measure leaders’ capacity to understand themselves, others, and their situations.15 LDL consists of four levels that increase as leaders shift from individualized thinking to diverse, interconnected problem-solving.

LDLs add another layer to identifying toxic leadership traits while implementing milestones or a leadership continuum for leaders to advance or screen for increased responsibility. If the Navy adopted LDLs, it could ensure every leader, from a new division officer to commanding officer, meets or exceeds certain thresholds for decision-making responsibilities.

Every leader progresses up the levels at a different rate and does not move from higher to lower levels.16

The four levels are:

Level one: Leaders have a simple understanding of the world and view experiences, events, and feelings in terms of fulfilling their personal goals. Situations and decisions are black and white, right or wrong. Leaders are unable to accept or consider options or input outside of their own.17

Level two: Leaders are capable of collaboration and able to consider the viewpoints of others. They recognize the limitation of level one as an ineffective leadership style and can see the variations of gray in a situation or decision. A challenge at this level is leaders may listen to recommendations from individuals lacking expertise and may not take responsibility for their decisions as would level three or four leaders.

Level three: Leaders reach a new level of balance in which they can shift between independent decision-making and factoring recommendations from others as meaningful sources of input. Leaders at this level can evaluate traditional rules, input from others and outside sources, and balance winning and losing to establish a complex comprehension of the world.

Level four: The very best leaders attain LDL four. Research suggests only 4 to 8 percent of adults ages 40 to 60 reach this level.18 Level four leaders have mastered the complex decision-making of level three and can step back, observe, and objectively evaluate the decision-making of level three leaders. Level four leaders can put themselves in other people’s shoes, pushing them over the threshold of this level and making them critical to an effective organization.

A 360-degree assessment can predict LDL levels and leadership effectiveness.19 That means assessments can help ensure the Navy promotes leaders to positions of authority with the decision-making mindset of a healthy leader. In practice, a leader should commission at level one or two and gradually progress to level four.

There is a tangible benefit to having a trusted member of one’s command to identify privately moments when tone or delivery are off. This allows leaders to identify themes or stressors that elevate the presence of harmful or toxic traits. In this vein, the Navy has implemented a relatively new program that allows active-duty service members to receive training to become a MyNavy Coach. The program’s purpose is to “deliberately grow, broaden, and sustain development” and “enhance performance through personal and professional goal setting and constructive feedback.”20

MyNavy Coach is an unofficial program but should become central to the Navy Leadership Development Continuum. Combining 360-degree assessments with coaching and mentorship increases leadership effectiveness by up to 60 percent.21 The program offers an opportunity to formally establish coaching as a meaningful part of a command-and-performance evaluation cycle for all ranks. The program can foster peer mentorship, stronger relationships, and an overall command culture of self-growth at an organizational level.

Finally, Chief of Naval Operations Admiral Mike Gilday should consider adding a new section of books to his CNO Reading List to assist sailors through their leadership journeys. A great leader must start with knowing who he or she is. From there, each subsequent book should increase the leader’s understanding of their personality, leadership style, strengths, and weaknesses. Once a leader has a foundation, they can use the results of their 360-degree assessments to work on weak areas and grow as a leader.

These solutions are a waste of time and resources without organizational buy-in and accountability, and, even then, it likely will take a decade to see meaningful culture change across the Navy. Any commanding officer, however, who commits to remediating and eliminating toxic leadership can make a more immediate, meaningful impact on his or her crew’s mental health and retention. These commands will take less time to see change, morale improvements, and leadership development.

We owe it to our sailors, ourselves, the Navy, and the nation to lead better and remove toxicity from our ranks.

3. Zagross Hadadian and Jamileh Zarei, “Relationship Between Toxic Leadership and Job Stress of Knowledge Workers,” Studies in Business and Economics 11, no. 3 (2016): 84–89.

Lieutenant Commander Callaghan is a public affairs officer assigned to the Chief of Navy Information in Washington, D.C. She is a graduate of the U.S. Naval Academy and holds a master’s degree from San Diego State University. Her previous assignments include Submarine Squadron 11 and Carrier Strike Group 12.

By Captain Michael A. Hanson, U.S. Marine Corps
In poorly performing units, effective and empowered NCOs may be the missing link.
Leadership Forum