Skip to main content
The growing legalization of cannabis consumption could soon present commanders with another issue to tackle and track. The Navy must have policies in place now to deal with its use.
Shutterstock

Is the Navy Ready for the “Green Wave”?

After multiple wins for cannabis legalization at the ballot box, just four states still maintain cannabis as illegal for both medical and recreational use. Senate Majority Leader Chuck Schumer has advocated for legislation to legalize cannabis at the federal level, and President Joe Biden campaigned on cannabis reform. The cannabis swell is on the horizon, but is the Navy ready to respond when the “zero tolerance” levy breaks? 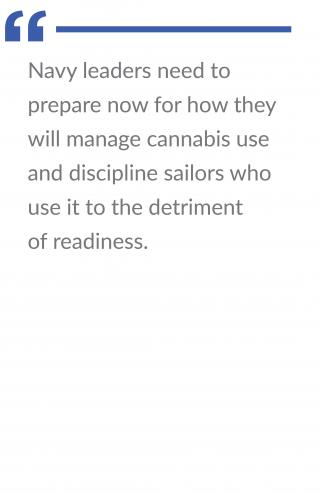 The Navy launched a zero-tolerance initiative in the mid-1980s, after struggling with service members’ use of illegal substances. This made adjudicating and disciplining offenses black and white. Now, with federal cannabis legalization possible, the Navy is entering a gray haze; however, it can apply lessons learned from across the states to implement smart policies in a post-prohibition environment. Three building blocks to consider:

Prohibit cannabis on board naval installations. Cannabis may be legal in local communities, but that does not mean it should be allowed on a base or on a ship. This includes Navy Exchange sales. If implemented, this would create a buffer for the fleet. It also is black and white, which helps the Navy keep the substance away from its commands. There is precedent with alcoholic beverages on board ships and inside barracks rooms. The Navy already is backing away from cigarettes, with increasingly stricter policy on when and where smoking is allowed. By establishing a strict edict, it can hold the line on cannabis.

Pursue rapid testing. Breathalyzers already are available on board ships and at gates for alcohol detection. There are numerous new technologies emerging to meet the demand for rapid testing for cannabis consumption. Hound Labs, for example, has developed a breathalyzer-like device able to detect cannabis within several hours of smoking—a time frame that falls within the window of impairment.1 The Navy needs to partner with companies like Hound Labs to ensure its commands have the right tools to make on-scene assessments of individuals’ condition.

Provide training and resources. Some sailors inevitably will consume cannabis if it becomes legal at the federal level, especially because it already is sold for recreational use in states with major fleet concentrations. Navy leaders need to prepare now for how they will manage its use and discipline sailors who use it to the detriment of readiness. There should be discussions within the the Senior Enlisted Academy and Navy Leadership and Ethics Command. If a sailor shows up to work drunk, there is a playbook for that: referral to a Drug and Alcohol Program advisor, counseling, and alcohol-related incident reporting. The Navy needs to draft, test, and deploy a similar command playbook for cannabis. The quarterdeck watch team needs to be ready to safely assess their shipmates.

The Navy need not reinvent the wheel. Canada—the largest country to legalize cannabis nationally—implemented a military-wide policy on who could use cannabis and when. The policy prohibits members of the armed forces from consuming cannabis 8 hours before any duty, 24 hours before any operation of weapons or vehicles, and 28 days before high-altitude parachuting, operating in a hyperbaric environment, or serving on a military aircraft.2 In addition, cannabis consumption is prohibited on international operations. Canada’s cannabis policy has remained largely unchanged since implemented in 2018, which is a testament to its effectiveness.

Legal cannabis consumption will be another issue commanders will need to tackle and track, and the Navy must put the pieces in place now, so the inevitable becomes a nonevent. Better to have the green wave roll under, instead of crashing the bow.

Lieutenant Commander Van Hook is a surface warfare officer. A graduate of the U.S. Naval Academy, he holds a master’s degree from the University of Arkansas and a master of business administration from the Kellogg School of Management at Northwestern University.

The Navy Needs A Fully Baked Plan for Cannabis Legalization

By Lieutenant Aaron Comins, U.S. Navy; Major Chad Seagren, U.S. Marine Corps (Retired); and Jennifer Heissel
Federal legalization of cannabis is coming. The Navy needs to be ready.
Nobody Asked Me, But . . .

Mass Punishment Does Not Work

By Major Brian A. Kerg, U.S. Marine Corps
Penalizing a group for one member's failure to follow the rules is not effective at discouraging poor behavior.