Skip to main content
A fisherwoman on her phone in Cidade Velha, Cape Verde. Crowdsourcing would augment the Coast Guard’s ability to detect and track Chinese IUU activities.
Alamy

The World’s Fishermen as a Maritime Sensor Network

Coincidentally, China is one of the world’s worst IUU fishing offenders. Furthermore, China has outfitted its industrial fishing fleet with hardware and collection capabilities that make its boats paramilitary maritime forces. It is a matter of national security to track and interdict these long-ranging fishing vessels, but thus far the U.S. Coast Guard has been unable to field a technology that offers sufficient density of coverage and microfidelity. 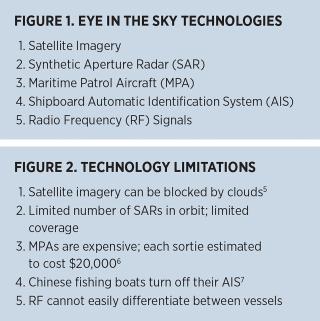 Tracking the Chinese fishing fleet largely amounts to a math problem. There currently are an estimated 17,000 high-endurance Chinese fishing vessels capable of operating both as swarms and as dispersed entities.3 Spreading these vessels out over the millions of square miles of other nations’ exclusive economic zones (EEZ) leads to a quintessential needle in the haystack problem.

Existing tracking efforts rely heavily on “eye in the sky” technologies that find and ping Chinese fishing boats, where the data is then processed by specialized AI companies. These technologies can be broken into five buckets (see Figure 1) and boast impressive capabilities, but capability gaps remain (see Figure 2).

The Coast Guard has championed orbital technologies, as seen in the Defense Innovation Unit’s recent X3View challenge.4 However, the Coast Guard should also investigate prototyping and deploying low-cost crowdsourced data platforms to provide “ground truths” in addition to these overhead collections.

Crowdsourced data platforms should be publicly available, compatible with low-end smartphones, and free to use. Local fishermen can then report Chinese vessels engaging in IUU activities in those fishermen’s sovereign waters. Reports could be broadcasted back to other platform users, the partner nation coast guard (if applicable), and the U.S. Coast Guard. The most analogous way to think of such a platform would be like the driving app Waze, but instead of reporting traffic or speed traps, fishermen would report Chinese vessels engaging in IUU fishing.

This nonstandard intelligence, surveillance, and reconnaissance (ISR) could greatly augment the Coast Guard’s detection abilities when employed as a tip-and-cue model. A fisherman’s report would be the “tip,” which allows the Coast Guard to direct private satellite, synthetic-aperture radar (SAR), or radio-frequency operators to “cue” their satellites onto specific patches of ocean. Consistently generating tasking for space assets is far more efficient than sweeping large swaths of the ocean and hoping to get a cold hit. Given the number of fishermen in the Indo-Pacific, this form of ISR would have incredible density of coverage.

Furthermore, if the reports included pictures, then the Coast Guard could obtain valuable amplifying data, such as hull number and cargo on deck. Space assets cannot easily discern hull numbers or draft. In the longer run, data collected by such a platform could be combined with weather and overhead collections to build predictive models of where the Chinese fishing fleet will operate each month.

A crowdsourced platform also could be used in the information operations domain. Pictures and videos of the Chinese fishing fleet employing outlawed fishing practices could be used in press releases to emphasize China’s flagrant violations of good maritime stewardship. Interviews with fishermen in the Philippines reveal that they detest the Chinese fishing fleet presence yet feel like many of their fellow countrymen are unaware of their plight.8 Uniting local seafaring communities via technology would have additional positive effects.

Multiple Proceedings authors have discussed the need to address China’s gray-zone tactics with counterinsurgency (COIN) tactics.9 COIN relies heavily on a positive rapport between blue forces and the local populace. Providing maritime communities with free technology that makes their time at sea safer and more productive would be a good first step in building such a rapport.

The biggest challenge would be getting the fishermen to use the platform and make reports. For starters, the platform would be simple to use and free to download. Once downloaded, a fisherman could view the last known position of hostile Chinese vessels. This is highly valuable since an encounter with Chinese fishing vessels often results in the local fishermen getting their nets cut or vessels rammed.10 And by making reports, a fisherman would indirectly help their comrades avoid unexpected encounters with the Chinese fleet.

The use of crowdsourcing in a contested environment is not unprecedented; during Russia’s invasion of Ukraine, Ukrainian civilians have increasingly used crowdsourcing applications to report the movements of Russian Army forces.11 The Philippine Navy has had limited success in getting Filipino fishermen to report Chinese maritime militia vessels over via radio, but expressed a need for a more centralized mobile platform.12

It is relatively easy to develop a crowdsourced platform. Dozens of such apps exist, although this specific platform would have to be custom built to function offline.13 Basic security and encryption would be essential, and it also would be wise to not require fishermen to include personal identification information (other than an email) when creating an account. Sending the reports’ metadata to an established server provider such as Amazon Web Services would further increase the data’s security and ability to be integrated with Coast Guard dashboards. Back-end quality assurance/quality control programs would serve as filters if China tried to flood the platform with misleading reports.

While space-based assets cost millions of dollars to launch and operate, a crowdsourcing platform could be built for $100,000 and maintained for even less. A team of Stanford University students working on a similar Hacking 4 Defense project were able to field a maritime domain awareness minimum viable product for only $20,000. Making the platform compatible with smartphones would remove the need for custom-built hardware and drive costs down. Furthermore, the potential user base is immense.

The U.S. Coast Guard specializes in building partnerships with fishing communities and fisheries enforcement agencies, both domestically and internationally. Once the first version of the platform is built and beta tested, the Coast Guard should showcase it to partner nations. Since the platform would be easy to use, training would take a matter of minutes. Countries most affected by Chinese IUU fishing—such as Ecuador, the Philippines, Micronesia, and Fiji—already have established relations with the U.S. Coast Guard, making institutional buy-in all the easier.

IUU fishing is a problem for the entire Departments of Defense and Homeland Security.14 However, the Coast Guard is best positioned to take on the challenge. To make maritime domain awareness (MDA) more robust, the Coast Guard should prototype a simple crowdsourced MDA platform, which does not have the upfront cost of exquisite surveillance assets. Such a platform would improve the Coast Guard’s capability to interdict Chinese IUU fishing, while simultaneously mobilizing local communities. For years, the act of exposing IUU fishing has largely been done by governments and a few specialized non-governmental organizations. The scope of the problem now demands an all-hands-on-deck effort that incorporates simple reporting by concerned and impacted local watermen.

Lieutenant Takahashi currently serves as a contracting officer’s representative at Coast Guard Civil Engineering Unit Oakland. Prior to that, he completed his master’s degree in structural engineering at Stanford University. His operational tours include deck watch officer on the USCGC Stratton (WMSL-752) and operations officer on the USCGC Adak (WPB-1333) in Bahrain.

The Fallacy of Presence

By Chief Boatswain’s Mate Phillip Null, U.S. Coast Guard
Presence is not a deterrent unless it is backed up by authorization for action.