Navigate by the Stars—From Beneath the Waves

Submarines rely on electronic navigation systems to determine the ship’s position while operating submerged. Submarines typically use inertial navigation systems, such as ring laser gyroscopes (RLGs), in conjunction with inputs from an electronic speed log, fathometer-generated seafloor topography, and periodic GPS position updates when the boat comes to periscope depth to accurately determine the ship’s position.

But the military operates in a dynamic geopolitical environment, and the possibility that an adversary could render GPS inaccurate or inoperative is something submarine crews can prepare for. For example, in 2017, more than 20 cargo ships in the Black Sea received spoofed GPS positions that indicated they were more than 25 nautical miles inland on Russian soil.1

RLGs and other inertial navigation systems are independently reliable because they do not rely solely on GPS input. However, RLGs can lose accuracy because of changes in ocean bottom topography and errors in the electronic speed log, gyrocompass, and GPS fixes. Even though there are two independent RLG units for redundancy, underway failure of one would place the boat in a precarious position. And a shipboard casualty could potentially take out both—a fire, for example, could claim both units.

Celestial navigation uses celestial bodies to determine a ship or aircraft’s position at the time of the observation. There are three main types of celestial fixes: morning twilight star fixes, ahead of sunrise; local apparent noon (LAN) running sun fixes; and evening twilight star fixes, after sunset. For accuracy, each requires a minimum of three observations with a sextant. For the star fixes, any 3 of the 58 navigational stars that are visible may be used, ideally separated by 120 degrees in azimuth (bearing) and between 15 to 60 degrees in altitude (elevation). For the LAN fix, three observations of the sun are taken throughout the day and then adjusted by obtaining a “running fix” to a common time, typically 1200 local time.

The calculations for a celestial fix are straightforward. A dead-reckoning (DR) position is the ship’s initial assumed position. The ship’s present course of advance and speed of advance are used to adjust the estimate of initial position between observations. This is key to obtaining the sun fix, since this process occurs over several hours to obtain a morning sun line, a sun line at local apparent noon, and an afternoon sun line, resulting in a decent azimuth spread between sights. For each observation, the observer marks the altitude of each celestial body observed while an assistant records the exact time of the observation. These two measurements are recorded to an extremely precise value—the altitude is recorded to a fraction of a minute (Example: 23 degrees, 12.4 minutes) and the time is recorded to the exact second. 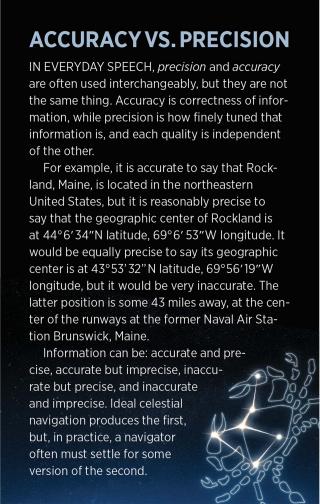 With the initial assumed positions, course of advance, speed of advance, and observations with altitudes and times recorded, the navigator or quartermaster can consult the values and corrections in the Nautical Almanac and the Sight Reduction tables, which account for errors in timekeepers, the sextant, the observer’s “height of eye” above sea level, and variations in the atmosphere due to temperature and pressure. He or she can also use a computer program.

The result of the calculation is called the intercept, which tells the navigator or quartermaster how far the ship is from its assumed, DR position. The intercepts for three or more observations form lines of position, which are drawn on a universal plotting sheet. The area at which the multiple observations intersect (what navigators sometimes call the “cocked hat”) is the celestial fix.

Seeing The Stars From Under The Water

The Navy requires that submarines carry marine sextants. My submarine, the USS Key West (SSN-722), had three, but only two crew members knew how to operate them—the assistant navigator, an electronics technician navigation (ETV) senior chief petty officer with nearly 20 years in the Navy, and myself, a submarine warfare officer who had celestial navigation training at the U.S. Merchant Marine Academy and on commercial cargo vessels.

Submarine ETVs no longer receive marine sextant operation, theory, and training because the Navy has deemed the skill all but obsolete thanks to GPS and inertial navigation. The only celestial navigation training they receive is how to obtain azimuths of the sun from a bearing on the periscope and how to input that bearing, current position, and time into the System to Estimate Latitude and Longitude Astronomically (STELLA) computer program designed by the U.S. Naval Observatory. In the event STELLA is rendered inoperable (unlikely, because the program is installed on numerous laptops and a copy of the original CD is maintained by the ETVs), paper copies of the Nautical Almanac are also available. The Sight Reduction tables, which were not available in paper copy on board my submarine, consist of tabulated calculations that, if necessary, could be replicated by use of the original formulas in the paper copy of the American Practical Navigator (also known as “Bowditch,” after its original editor, Nathaniel Bowditch) that is maintained on board.

But celestial navigation using a sextant is impractical and inefficient for a submarine, which would have to surface from her haven beneath the waves and send personnel into the sail. Those sailors would have to carry a sextant up the ladder carefully to avoid damaging the finely tuned instrument. Then, the observer would have to take the sights quickly, before rapidly descending with the fragile sextant so the submarine could submerge expeditiously. This might have made sense in World War II, when submarines spent most of their time surfaced, but today, while it is possible, it is impractical and could expose the submarine to unnecessary risk.

On the Key West, I hypothesized that the optical periscope’s internal camera that was tied into the BYG-1 Fire Control System could provide a practical and efficient tool to perform celestial navigation. The periscope can be trained on any bearing and to a high elevation. I also hypothesized that star fixes would be the best option, because the periscope’s optics can turn on a telemeter to assist the operator with zooming in and marking precise bearings and elevations of celestial bodies. When the periscope operator presses the “MARK” button on the right-side handle, the fire-control system captures a camera image of what the periscope was looking at. Unfortunately, the camera cannot capture the dim light of stars, but this empty image contains excellent metadata that provides ship’s course, speed, depth, position data, bearing, and elevation that the periscope was looking at when the image was taken. This is precisely the information required by the traditional method of celestial navigation, and it is accomplished without the need to surface or use a sextant! A periscope operator can capture as many images (or at least the metadata) as required and later retrieve any of them to process a fix.

The routine to execute celestial navigation is easily incorporated into a unit’s operational battle rhythm. Before the submarine gets to periscope depth, the quartermaster can open STELLA on the navigation laptop to preplan the observations. By dead reckoning the ship’s expected position and the expected time to reach periscope depth, the quartermaster can identify which navigational stars the periscope operator will be able to see and predict expected bearings and elevations. After the ship is safe at periscope depth, the quartermaster and periscope assistant provide these for the periscope operator to quickly pan over, zoom in on, and “mark” the celestial body. The saved fix can be calculated and evaluated right away or later, depending on operational flexibility and need. With a standardized, easy-to-use worksheet, watch teams can collect needed observations in a relatively short time. The preplanning process on the way to periscope depth takes approximately five minutes, and the observation process while there can be completed in less than that. The celestial calculation and position determination in STELLA take another five minutes to complete.

One limitation is that the BYG-1 Fire Control System image metadata records elevation less precisely than a sextant. While this is sufficient for contact management and target solution development, it is imprecise for navigation. A minute of a degree will result in a mile of error, so celestial navigation by periscope will yield an error of plus or minus several miles based on measurement of elevation alone. (A marine sextant can measure as finely as a tenth of a minute, significantly more precise than the periscope.) Refining periscope elevation measurements to a hundredth of a degree would provide a more precise measurement and minimize observation measurement errors.

To improve accuracy, marine sextants use a procedure to determine exactly how much error is present in the sextant based on correctable factors, which the operator can adjust, as well as uncorrectable factors that are built into the sextant. This is called the index correction. There is a procedure for determining periscope offset error with regard to bearing, which is performed by comparing the known bearing of a navigation aid range marker or by obtaining an azimuth bearing to a celestial body and comparing the obtained bearing with the expected bearing. At present, there is no comparable procedure for determining periscope elevation error.

A marine sextant has one significant disadvantage: Fixes can be obtained only when a visible and sharp horizon exists to act as a reference to measure the sun or star’s altitude. This normally means that a navigator is limited to conducting star fixes during morning or evening twilight or during the day for the running sun fix. Between evening twilight and morning twilight, the horizon typically is no longer distinct, preventing celestial fixes from being performed overnight. But while experimenting with the periscope, I discovered that this was no longer a significant limitation. The periscope can determine the correct elevation of the optics based on ship’s pitch, roll, and yaw and use of an internal periscope gyro. Since the periscope does not need to have a reference horizon, this enables the navigator to obtain a celestial fix overnight, with the cover of darkness improving stealth and safety for the submarine.

An additional aspect of the experiment was to determine if prior knowledge and experience with traditional celestial navigation are required to achieve accurate fixes on board a submarine. I have had formal classroom training and hands-on experience and evaluation with celestial navigation, but I wanted to see if inexperienced shipmates could succeed with the periscope and STELLA.

Lieutenant Homeier is a submarine warfare officer. From 2017 to 2020, he served as a division officer on board the USS Key West (SSN-722), a Los Angeles–class submarine homeported in Apra Harbor, Guam. Currently, he is stationed at Naval Nuclear Power Training Command in Goose Creek, South Carolina, as an Enlisted Nuclear Power School division director and instructor.

First to the Fight

By Rear Admiral Blake Converse, U.S. Navy
The U.S. submarine force’s ability to win the next conflict will depend on the commitment and training of its sailors.
P Professional Notes

By Lieutenant Commander William Spears, U.S. Navy
The interpersonal skills required to lead a watch team are not taught in any formal setting. These skills must be developed, honed through practice, and hardened by failure and reflection.
P Professional Notes

By Commander Justin McCaffree, U.S. Navy
Combat logistics in the form of underway replenishment gives the Navy its global reach in peace and war.