The Tower and the Hive: Man-Machine Teaming in 2030

Ships Log 2030. Taiwan did not stand a chance. When the PLA crossed the strait, we expected it to be a war of high-tech group three drones and ballistic missiles. We were wrong. Over the past two months, all our ships making port calls have been attacked. China denied any involvement, but we know their hand is behind this. Small one- and two-man teams armed with Kalashnikov attack drones destroyed our Aegis arrays, blinding the fleet. We thought the enemy would keep a human in the loop. The semiautonomous UAS enabled by computer vision could not be jammed by our electronic warfare systems. Raytheon and Lockheed could not keep up with demand for Aegis and communication equipment repairs. It will take years for our fleet to recover. Without a credible deterrent of U.S. sea power, pro-mainland Taiwanese politicians led a bloodless coup, convincing the government that surrender was better than death.

The U.S. fleet is not keeping pace with the asymmetry of technological innovation. At no time in the past have such small and inexpensive tools been available to do so much targeted damage. Current commanders lack the necessary tools to defeat these threats, and a new effort is needed. The solution is “the tower and the hive,” a method to observe, orient on, and engage these threats with a human in the loop.

In 2017, the Ukrainian armed forces suffered the destruction of multiple ammunition storage facilities from small, remotely piloted, unmanned aerial systems (UASs). These asymmetrical strikes cost the attackers very little in material requirements, yet inflicted billions of dollars of damage to the defending forces. Imposing asymmetric costs on enemy systems is the crux of maneuver warfare. Proxy forces in Ukraine could conduct these attacks in 2017. In 2021 and beyond, such capabilities will only become more lethal and distributed.

The 2020 war between Armenia and Azerbaijan over the Nagorno-Karabakh region demonstrated the efficacy of artificial intelligence–enabled, kamikaze UAS attacks on today’s battlefield. Similar to weapon testing during the 1930s Spanish Civil War, this recent conflict provided a lens to view how rapidly such technologies are changing the character of conflict. Reports included both reconnaissance UAS missions and kamikaze UAS attacks. UASs even transmitted target coordinates directly to spike antitank guided missiles, shortening kill chain time, and resulting in precision strikes against static Armenian armor. A 2020 RAND study indicates that commercial and small UASs are reaching technical characteristics usually reserved for larger military systems.

As the cost curve for acquiring and fielding attack UAS decreases, and the capabilities of computer vision through edge-computing neural nets increases, these systems will proliferate. Kalashnikov recently unveiled a kamikaze UAS said to be the cheapest on the market. The drone reportedly can use basic image recognition in which a target image can be uploaded to the onboard computer. The drone then locates and attacks the target independently. In the Nagorno-Karabakh conflict, Azerbaijan used Orbiter 1K loitering munitions, built and sold by Israel. According to the company’s website, the drone can hold a two-kilogram explosive payload and has an “advanced autonomous flight mode.” This revolution will continue as the need for human interaction with the kill chain is reduced.

In the opening vignette, vulnerable Aegis panels were attacked by low-cost, semiautonomous UASs. With the insight from recent historical case studies, this scenario is likely in the event of rising tensions in the South China Sea. A team of two agents with little training could employ a weapon the size of a small pelican case at the cost of tens of thousands of dollars to destroy an exquisite system worth tens of millions.

To understand the time and space considerations of such an attack, consider the basic physics of the scenario. Current attack UASs travel at 30 to 70 knots. Given that, one can calculate the decision time a ship has to detect, classify, and engage the threat (see Figure 1).

Under combat conditions, 129 seconds expires rapidly. A bridge watch team needs to detect, classify, and engage an incoming threat UAS within this period. Achieving a battle drill that meets these time constraints is challenging, and currently not achievable with the tools available. UAS threats compress the commander’s decision time to the point in which the ship’s captain may not even be informed of the threat before it impacts.

To further illustrate how quickly a ship’s company must react, consider Pier 10 in San Diego. If a destroyer is docked at the pier, it can be engaged by UAS from around the San Diego area. Figure 2 below shows plausible launch sites that correspond to the timetables above. 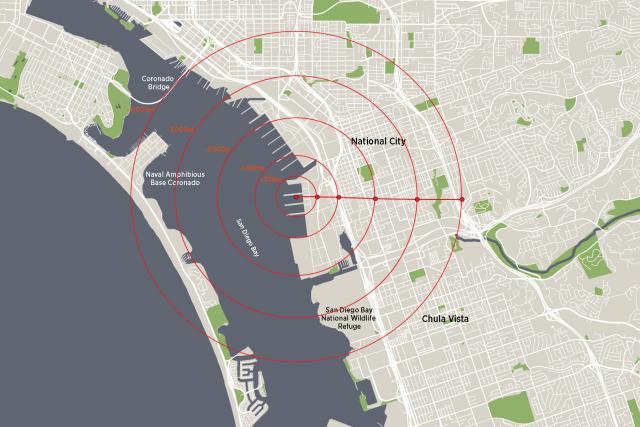 Now, imagine a destroyer conducting a port call in Jakarta, Indonesia. Within four kilometers of the ship are dozens of potential launch points in commercial districts, dense neighborhoods, and local fishing boat moorings. If all a launch team must do is throw the UAS into the air and point it toward the target, then every pair of military-aged men with a vehicle large enough to hold the UAS become a potential threat. The solution to this problem is twofold—a method to detect and classify threats (the tower), and a method to engage them (the hive).

The Tower and the Hive

When a Tesla Model 3 parks itself in a parking lot, it uses eight cameras with 360-degree coverage. The camera video inputs feed a neural net that makes decisions about speed, wheel alignment, and safety parameters. When moving, the vehicle can identify traffic lights, pedestrians, and other vehicles using this computer vision and classification system. This technology is cross domain and should be applied on U.S. naval ships in a concept I call “the tower.” Each ship should have a 360-degree camera view from the mast that feeds into the bridge. The watch crew could see both the live footage and receive classifications from the onboard neural net to enable faster and more effective decision making. Imagine transiting the Strait of Hormuz and being able to quickly identify ships and boats within visual range including heading information and automatic calculations about range and bearing. This can be done with current technology without a single active radar ping. The purpose of the tower is not to replace watchstanders, but to increase the speed at which watchstanders can observe the environment and orient on threats.

During a port call, this technology can save lives. Activating a radar while in port can have large effects on local relations and generally is not permitted. Because of the amount of clutter in the electronic spectrum, classification of contacts through passive electronic detection is a massive challenge. In addition, with onboard computer vision and UAS autonomous target engagement, there is no controller-to-UAS link to detect. However, passive computer vision offers a solution to these challenges for watchstanders. Figure 3 below shows Chinese traffic cameras detecting and classifying objects with today’s technology. In the future, this capability will become more distributed and come in smaller packages. A shipboard neural net linked to a 360-degree field-of-view camera system could identify contacts similarly and provide a best guess to the commander on what these contacts are and where they are going.

After detecting and classifying threats with the tower, the threats must be engaged. Engagement could occur with a concept I call “the hive.” Imagine a small quadcon/iso-container-sized object mounted behind the mast and above the pilothouse of an Arleigh Burke–class destroyer. This container would house six to eight interceptor UASs on wireless charging stations, with the option for a hardpoint docking station for rough weather. The wireless charging stations would employ the same technology used to charge an iPhone 12 on a charging pad. UASs could leave and enter the hive when commanded by the bridge, and not require human handling. In essence, a synthetic beehive construct would provide flexibility and reduce manpower requirements through automation. When drones require maintenance, they could be programmed to land on the flight deck for handling and maintenance by crew members. Extra UASs could be stored on the ship to replace those that are unserviceable. The purpose of the hive is to increase the speed at which the crew can act against a threat.

Why should the Navy use a hive with interceptor drones to engage other drones instead of the Phalanx Close-in Weapon System (CIWS) or lasers? These systems provide potential options when not in port, especially low-cost lasers. However, while in port, especially in neutral locations, using a CIWS is extremely risky because of the surface danger zone of its rounds in an environment with skyscrapers and civilians. Using a laser is less risky, but could still have unacceptable consequences. Using CIWS or a laser assumes that their geometries of fire can even engage an incoming threat when the ship cannot maneuver because it is alongside a pier. While ramming incoming threat drones with friendly interceptor drones seems farfetched, private companies are already employing this method in the United States. Using high-speed, high-performance drone swarms to destroy incoming enemy UASs is a better option with lower collateral-damage risk.

The tower and hive provide multidomain functionality to the commander to increase decision space and reduce the vulnerability gap. Ultimately, the types of drones in the hive could be expanded to more than just interceptors. The ship could host its own attack UASs to defeat small boats, or reconnaissance UASs to patrol the skies around the ship and observe the dead space the bridge cannot see. Furthermore, video streams from the tower and the hive could feed classification information of what the destroyer sees on patrol and in port. That metadata could feed a central repository in the contiguous United States from all Navy ships abroad. Such a wealth of information would be invaluable to the national command authority and require less report writing. A destroyer could, in effect, become a small carrier with huge gains in lethality and data collection.

The final piece of the puzzle involves not the individual tower and hive, but the network of tower and hives across the fleet. Imagine a scenario in which ships could talk to each other using a high-bandwidth network like Starlink. With such connectivity, if one ship is attacked during a port call, all ships will know immediately. Ships without a hive could fall under the protective umbrella of those with one. The result will be an anti-fragile network that responds to evolving threats rapidly and thrives in chaos.

In a battlefield with fast-moving miniaturized but lethal threats, commanders need more time to make decisions, and systems to defeat those threats. The future is now. It is being discovered in labs across the world, as countries and nongovernmental actors race to gain an edge. The Navy must accelerate fielding technologies that currently exist and invest in the rapid development of those required. The tower and the hive should take precedence to allow the defeat of threats that already exist but lack ready solutions. If the Navy is serious about distributed lethality and network centric warfare, it is an imperative.

Captain Harper graduated from the U.S. Naval Academy in 2015. Following graduation from Infantry Officers Course, he reported to 1st Battalion, 7th Marines, as a combined antiarmor platoon commander and deployed to Syria in support of Operation Inherent Resolve. He is a recent graduate of the Naval Postgraduate School in Monterey, California.

The Corps Must Do More with Unmanned Aerial Systems

By Major Nicola “Nick” Brunetti-Lihach, U.S. Marine Corps
The Marine Corps has barely begun to experiment with and find uses for unmanned aerial systems. ISIS has been using off-the-shelf drones for four years. It's time for the Corps ...
Firing on the Up Roll

Needed: A Strategy for Unmanned Vehicles

By Harlan Ullman
The Navy’s Unmanned Campaign Framework is another example of technology driving strategy, instead of the reverse.
P Article

The Manned-Unmanned Team: Where’s the Doctrine?