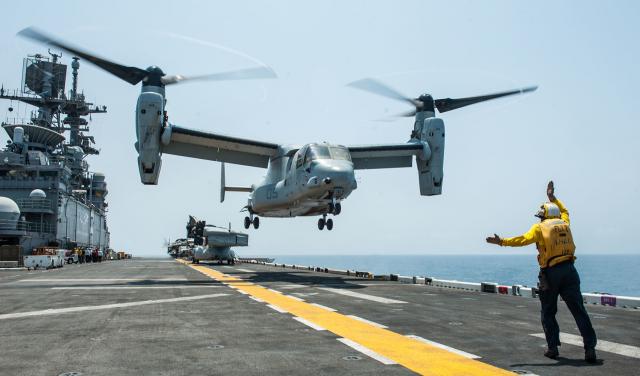 With the Marine Corps “all-in” on naval integration, composite warfare, new force design efforts, and new concepts such as expeditionary advanced base operations, Marine Corps aviation understandably is struggling with its future and place in the maritime fight.1 Marine Corps doctrine, predicated on supporting Marines in the context of land operations, has left its aviation arm unprepared for naval campaigning. However, the inherent capabilities of Marine Corps aviation, if repurposed to support the fleet, can play an important role in naval littoral operations. In doing so, it will contribute to the success of the fleet and Marines ashore and help integrate the service into fleet operations using composite warfare.

Naval aviation, including Marine aviation, will be key to any future naval campaign, especially one fought in the littorals. Such campaigns can include missions of sea denial and sea control, amphibious operations, naval special operations, and similar operations in the era of great power competition. Aviation increases the operational reach of littoral naval forces; and provides fires and effects; protection; logistical support; air assault capabilities; intelligence, surveillance, and reconnaissance; and command-and-control (C2) functions.

Naval aviation forces are not limited to aircraft and their crews, but rather are a family of capabilities designed to exploit and fight in the air domain. That includes Marine Corps and Navy capabilities: fixed-wing, rotary-wing, and tilt-rotor aviation; unmanned systems; ground-based and surface-based counterair capabilities; permanent and expeditionary air bases; aviation logistics capabilities; and airborne, ground-based, and sea-based aviation C2 agencies. The fleet will rely on aviation well into the future because of these capabilities. Marine aviation likewise can contribute to the success of the fleet with similar functions and capabilities. But how can Marine aviation be brought to bear at the tactical level?

For decades, Marine aviation has been oriented around providing its six functions to support Marine air-ground task forces (MAGTFs) fighting in land campaigns. However, the rise of China is driving the Marine Corps back to supporting the fleet. The problem, then, is how should Marine aviation reorganize and fight in the context of a primarily naval campaign?

The Commandant’s position is clear. He sees the Marine Corps organized into Fleet Marine Forces, fighting as an “extension of the fleet,” assisting in sea control and sea denial operations. Marine Corps units must be capable of persisting within adversaries’ long-range precision fire weapons engagement zones. In addition, the Commandant says “there is a need to reestablish a more integrated approach to operations in the maritime domain” (emphasis added).2 This integration is not just high-level deconfliction, but rather complete integration of Marine Corps units with the Navy at the lowest tactical levels.

This level of tactical integration is required because the Marine Corps has been directed to fight in the context of composite warfare, the Navy’s tactical doctrine for decentralized control and execution of naval forces.3 Composite warfare is organized under a single composite warfare commander (CWC), with subordinate warfare commanders, functional group commanders, and coordinators creating a robust but flexible method of naval C2.4 Fully implemented, such an approach would substantially alter the dynamics of MAGTF C2. This holds especially true for aviation. Rather than simply operating in general support of the MAGTF, an air combat element (ACE) would be responsive to the CWC and his or her subordinate warfare commanders.

The decomposition of the MAGTF is both necessary and appropriate in the context of a naval campaign. Indeed, the Commandant himself says that the MAGTF “cannot be our only solution for all crises.”5 That does not mean Marines would not be supporting other Marines from the cockpits; they likely would be. The organizational structure of the MAGTF would change when operating under the CWC, with elements of the MAGTF potentially supporting other warfare commanders. The mission of Marines, operating under a maritime component commander and a CWC, would be to accomplish campaign objectives. Doing so in full cooperation with the Navy, shoulder to shoulder, is what Marines have done since the founding of the Corps.

Similarly, Marine Corps and Navy aviation could operate as a single, coherent force distributed across aircraft carriers, amphibious ships, and permanent and expeditionary facilities ashore. Such open CWC architectures may tactically integrate forces across several carrier strike groups, expeditionary strike groups, and shore-based Marine Corps forces into a single, persistent littoral and naval force. As such, it is conceivable that these new tactical composite warfare task forces could be commanded by two- and three-star officers, as many naval task forces were during World War II.

Since early military aviation, there has been a great demand for aviation support—and an inability to meet that demand. The supply-and-demand mismatch has caused military forces around the world to centralize aviation operations into a single aviation force, under the command of an aviator, whose responsibility it is to prioritize and allocate aviation resources to achieve success.

Since the advent of MAGTFs just after the Korean War, Marine Corps aviation has jealously husbanded its resources to support Marine Corps ground units. Similarly, Navy aviation has been responsive to the fleet, largely working under a unified strike warfare commander organized under a CWC.6 The future of naval aviation is no different, as the same supply-and-demand mismatches will persist. Given that both Navy and Marine Corps forces will be campaigning together for sea control and sea denial, Navy and Marine Corps aviation should integrate at the tactical level, responsive to the CWC. This integrated tactical aviation element, hereafter called the maritime air combat element (MACE), would unify the aviation effort in support of the CWC.

The MACE would be commanded by an aviator from the service with the preponderance of assets and ability to command and control those assets. Such practice has for decades been standard for determining the commander of air components.7 For example, should an embarked Marine expeditionary unit (MEU) join a carrier strike group in a CWC construct, the MEU’s ACE likely would snap to the control of the commander of the carrier’s air wing. Conversely, should a Marine aircraft wing be deployed under a CWC, a carrier air wing may subordinate to Marine aircraft wing control to prosecute the naval campaign.

To the extent that the MACE commander were not granted warfare commander authorities, he or she would support the other elements of the CWC task force, including Marine Corps forces. Based on functional aviation planning, the MACE commander, serving as the air resources element coordinator, would recommend an air apportionment decision to the CWC and, pending approval, would generate an integrated naval air tasking order and an air plan.11 This integrated naval air tasking order would be submitted to the joint force air component commander for inclusion into the theater air tasking order, and any excess sorties beyond those required for the naval campaign would be surrendered for joint use. These are essentially the same processes that currently occur between the ACE commander and the MAGTF commander.12

For example, in the context of a maritime campaign, the MACE commander may be tasked with supporting the antisubmarine warfare (ASW) commander in locating and trailing an adversary submarine. The threat is substantial and rising; adversary interceptor aircraft are plentiful and are engaging in aggressive but nonlethal activity in international maritime airspace. The MACE would then coordinate ASW aircraft, including several P-8s, to assist the ASW commander. Protecting the P-8s would fall to Navy and Marine Corps F-35s, flying from LHDs, aircraft carriers, and expeditionary bases ashore. MACE elements would coordinate aerial refueling and forward arming and refueling point (FARP) operations to increase endurance and sortie rates. A combination of Navy E-2D aircraft and a Marine early warning/control center would provide air surveillance and airspace management, while an integrated Navy and Marine Tactical Air Direction Center ashore would provides overall air direction for the effort. Meanwhile, other Navy fighter aircraft, and a multitude of unmanned aircraft, would conduct surface combat air patrols to prevent adversary destroyers from interfering with the ASW operation.

This vignette shows what an integrated Navy–Marine Corps approach to aviation in the littorals could achieve. It is noteworthy how Marine Corps aircraft and C2 agencies can contribute to perhaps the most non-Marine of efforts: ASW.

Similarly, a MACE commander may be tasked with conducting land-attack operations. Penetrating an adversary integrated air defense system is not an easy task. The MACE commander, in his or her capacity as a strike warfare commander, would coordinate cruise missile attacks to destroy key nodes in adversary C2 systems, while Navy electronic warfare aircraft suppress enemy air defenses. A Marine-led fighter sweep and fighter escort package could shepherd unmanned aircraft to execute the deep strike. Navy unmanned aerial refuelers would support the escort package. If a Marine Corps fighter were shot down during the fighter sweep, a tactical recovery of the aircraft and personnel package would be launched from an amphibious ready group, refuel at a Marine FARP, and proceed to rescue the downed aircrew.

Functions of maritime aviation, along with an integrated Navy–Marine Corps aviation organization, are key to successful air operations in the littorals. There are countless cases in which an integrated Navy and Marine Corps approach to aviation in the littorals demonstrates superior capability, capacity, flexibility, resilience, efficiency, and effectiveness over sole service–centric approaches to aviation.

Getting There from Here

The Marine Corps and Navy should jointly experiment with combined MACE headquarters, facilitating tactical integration of aviation within the composite warfare construct, in the context of naval campaigning. Fleet commanders should demand such integration at the lowest tactical level, including a dynamic, open composite warfare architecture.

A Navy–Marine Corps integrated aviation doctrine should be developed, with a common approach to aviation functions, aviation planning processes, and flexible procedures.

13. Proposed maritime aviation functions would include: ISR; counterair; land attack; electronic warfare; antisurface warfare; antisubmarine warfare; assault support and air mobility; and control of aircraft and missiles. In this construct, the Marine aerial reconnaissance function is merged into the Navy’s ISR requirements, Marine antiair warfare is brought into line with joint terminology of counterair, and offensive air support and strike warfare are merged with land attack. Antisurface and antisubmarine warfare are added. Assault support is expanded to include mobility operations. Electronic warfare and control of aircraft and missiles are retained. This construct could cover any conceivable function of Navy and Marine Corps aviation in a littoral combat environment, as well as support the joint force air component commander, thereby facilitating aviation planning.

Lieutenant Colonel Lauterbach is the plans officer for 2d Marine Aircraft Wing. He has experience as an aviation C2 officer and as a UH-1Y Huey pilot. He is a weapons and tactics instructor and a graduate of the Marine Corps School of Advanced Warfighting.

By General David Berger, U.S. Marine Corps
The undersea fight will be critical in future wars, and the Corps must help win those battles.
P Featured Article

What Does the Navy Need from the Marine Corps?

By Major Brian Kerg, U.S. Marine Corps
Absent input from the Navy, the Corps risks transforming itself into a force the Navy could be ill-prepared to employ.
P Featured Article