No one will ever accuse the Marine Corps of having a short memory. Indeed, it is all but an article of faith within the Corps that much of its misery at Guadalcanal can be traced to the Navy’s logistics failures. And in truth, the criticism is not without merit. At the start of Operation Watchtower, neither the Navy nor the Marine Corps was prepared to move personnel and matériel off cargo ships and across the shore quickly in a contested environment. Doctrinally, while Landing Operations, U.S. Navy (FTP 167) acknowledged the tasks associated with conducting offload operations, it failed to lay out the command-and-control expectations.1 The result was an undermanned and uncoordinated traffic jam that became a debacle once Japanese forces counterattacked in earnest.

What often is forgotten, however, is the speed and effectiveness of the Navy’s response. During the crucial month of August 1942, the Navy reacted with an expeditionary logistics capability significantly faster than its Japanese adversaries. It did so in an environment where sea and air control always were tenuous, and gave the Marines a slim but decisive material advantage ashore. Equally critical, the Navy learned from the experience and institutionalized remedies into its amphibious warfare doctrine.2 How the Navy achieved this and what those accomplishments imply for contemporary expeditionary operations are worth exploring by modern planners.

To start, once Task Force (TF) 62 withdrew following the devastating losses at the Battle of Savo Island, U.S. and Japanese forces spent most of August executing the logistics equivalent of a meeting engagement. With neither side able to establish continuous sea or air control in the operating area and each side desperately short of stores, both navies sought to push resources into their lodgments as quickly as possible. For the United States, the main issue was that Japanese sea power made overnight loitering lethal, while long-range Japanese air strikes made daytime operations uncertain. Conversely, the Japanese quickly determined that daytime operations within the umbrella of Navy and Marine Corps aircraft at Henderson Field or Army aircraft from Espiritu Santo could not be done safely or predictably. Both sides settled on a similar logistics model: During periods of limited sea and air control, high-speed destroyer transports dashed into Guadalcanal, offloaded, and exited.

While both sides adopted similar logistics schemes of maneuver, U.S. efforts proved more effective, largely because of crucial differences in capabilities. Specifically, following Savo Island and the suspension of unloading operations on 9 August 1942, operating traditional logistics vessels in the Solomons was too hazardous. As a substitute, most sustainment operations quickly devolved to the destroyer transports (APDs) of Transportation Division 12. Converted from World War I–era destroyers, these ships could carry company-sized units and approximately 40 tons of cargo. Even more critical, they carried their own landing craft and could support ship-to-shore movement of men and matériel. Furthermore, APDs  were capable of speeds in excess of 20 knots and carried a modest but respectable antiaircraft battery and a limited depth charge load.

The APDs were just fast enough to evade most contact, armed enough to defend themselves, and equipped enough to execute ship-to-shore operations independently.3 Beginning with a shipment of aviation fuel, stores, and personnel on 15 August 1942—which allowed the establishment of Henderson Field as an operating base—APDs became a critical link in maintaining logistics support to Guadalcanal.4 Drawing on the success of APDs, other older converted destroyers (mostly minesweepers and seaplane tenders—often augmented with towed barges to increase capacity) also were quickly drawn into these resupply missions, with comparable results.5 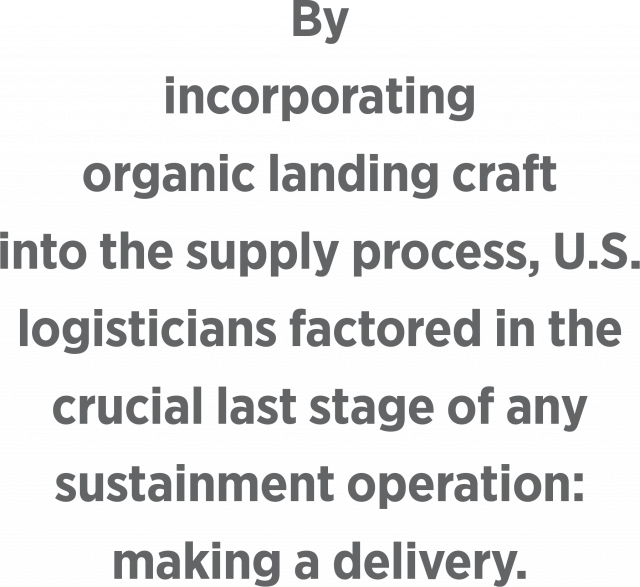 Although the Japanese began similar operations at virtually the same time (albeit at night), their throughput was significantly lower—their first delivery was from a single destroyer that put ashore only 200 troops and their stores.6 The size of the effort notwithstanding, the main difference between the United States and Japan was the ship-to-shore connection. Japanese destroyers were not equipped with landing craft. Instead, ship-to-shore movement relied on a combination of ships’ boats and sending supplies through the surf in barrels.7

Relative to U.S. efforts, Japanese resupply operations using destroyer transports were highly successful in reaching Guadalcanal, but deliveries to shore were more haphazard. Indeed, delivery wastage rates ran as high as 70 percent because of the failure to account for the complexities of ship-to-shore movement.8 Consequently, while victory at Savo Island meant the Japanese effectively could deny most of the area around Guadalcanal to U.S. forces, their ineffective delivery systems significantly hampered logistics operations, and operational success failed to translate into sustainable logistics.

What stands out, then, between the U.S. and Japanese efforts is that the U.S. concept of logistics was a more integrated (and effective) capability. By incorporating organic landing craft into the supply process, U.S. logisticians factored in the crucial last stage of any sustainment operation: making a delivery. This translated into significantly better results than their Japanese counterparts achieved, despite frequent numeric inferiority and a longer logistics tail than Japanese forces in the Solomons.9 Not respective of the errors during the initial offloads on 7–8 August, the U.S. logistics counterstrike was equally fast, relatively larger, and generally more effective than Japanese operations. Simply put, the Americans could and did make their trips count more than the Japanese could.

The other critical piece of logistics during August lay in the use of air assets. Marine Corps R4Ds began shuttle runs into Guadalcanal on 20 August 1942.10 While by no means large, R4Ds could fly to and from Guadalcanal without refueling, deliver enough aviation fuel and stores to keep 12 F4F Wildcats airborne for an hour, and then evacuate 16 stretcher cases.11 Conversely, once Henderson Field was lost, the only avenue available to the Japanese for delivering critical assets by air was parachute drops—which led to Marines capturing four of six deliveries.12 Rapid establishment and exploitation of Henderson Field coupled with the rough-field characteristics of R4Ds gave U.S. logisticians an option their Japanese counterparts never had. Yet again, the U.S. logistics counterstrike was markedly faster and more effective than the corresponding Japanese move.

Modern logisticians preparing to operate in environments where access and control may be uncertain or denied can and should draw lessons from the early stages of Guadalcanal.

Combat stevedoring matters and doctrine must factor this into planning. Better consolidation of post-assault logistics operations would have obviated many of the steps the Navy had to take through the rest of August 1942. The Navy recognized this, and revisions to FTP 167 began during Operation Watchtower.13 More important, this recognition translated into assets: The Navy commissioned the first Special Naval Construction Battalion for combat stevedoring in September 1942.14 Ultimately, nearly 40 of the special battalions saw service during World War II, and they were the forebears of the current Navy Expeditionary Logistics Support Group.

The Navy currently has seven cargo-handling battalions (NCHBs), six of which are Navy Reserve components. This is an essential—but achingly thin—resource. In the short run, planners need to be aware of how few cargo handlers the Navy has, or the failures of Guadalcanal will be repeated. In the long run, the Navy must determine if only one active-duty cargo-handling battalion is sufficient. Adding a second active-duty NCHB and assigning one to the Atlantic Fleet and another to the Pacific Fleet would significantly reduce the likelihood of repeating the stevedoring mistakes of Guadalcanal in a modern amphibious landing.

When operating in an environment where sea and air control are doubtful and loitering fatal, speed, size, and mobility are critical. Logistics assets that are fast enough to dash in/dash out, large enough to carry a useful load, and small and agile enough to disperse goods and stores are critical in the early stages of a contested landing, particularly if they are sufficiently self-contained to execute their own landing and stevedoring. At a certain level, the modern equivalent of an APD is the expeditionary fast transport (T-EPF): Fast, shallow draft, compact, and with an organic roll-on/roll-off characteristic, T-EPFs can operate in much the same way as their APD predecessors.

However, as with combat stevedores, this is a thin resource. The Military Sealift Command operates only ten (with two more on the way and a further two planned). In addition, T-EPFs essentially are armed only to provide basic force protection (as befits civilian-manned vessels), have difficulty operating in advanced sea states, and struggle to conduct at-sea onloads with expeditionary transfer docks (T-ESDs).15

The key to the APDs’ success was that they were a low-end surface combatant capable of supporting a high-end logistics fight. Given this, a ship more in keeping with the APDs’ ability to fight its way in and out of an operating area is the multirole Danish Absalon class. Robustly armed as a multipurpose frigate but with a roll-on/roll-off capability, a cargo deck capable of handling armored vehicles, and a helicopter flight deck capable of serving up to a CH-47 Chinook, an Absalon is more than capable of serving as its own escort while carrying and delivering a military load. As part of the ongoing efforts to choose the FFG(X), the Navy should contemplate acquiring Absalon-class vessels to resurrect the capabilities once filled by APDs.

Quickly and effectively establish a rough-field air bridge. Bringing the R4D into play within two weeks of the Guadalcanal landing gave the United States a logistics option that the Japanese never matched. The obvious contemporary counterpart to the R4D is the venerable C-130. While an exceptional asset, this, too, suffers from a thin supply. Counting KC-130s, the Navy owns fewer than 20 aircraft, nearly all of which have experienced significant age-related maintenance issues in the past five years. The Marine Corps inventory, most of which are the newer J-variants, is marginally better at more than 50 aircraft, with more on order, but both services would benefit from recapitalization of their expeditionary air logistics assets.

Relative to their Operation Watchtower peers, modern logisticians have access to some, but not all, of the capabilities needed to operate in a contested environment. However, these resources are thin and, in some cases, downright eroded—as with the C-130 fleet. If the Navy intends to stay in the amphibious landing business, it needs to reinvest in high-speed, expeditionary logistics assets with the speed to dash in and out—and the strength to defend themselves when necessary. Even logisticians need to be prepared to fight, and right now it is not clear that they are.

Hardware issues aside, what the Navy can do is think. The ultimate message from Guadalcanal is that plans fail and success is won by the quickest learner. Both the United States and Japan had similar problems, similar approaches, and similar assets. In many respects, the Japanese were in a better operational position following Savo Island. Where the two sides differed was in the ability to capitalize on logistics momentum. In the end, the United States won the logistics fight by solving the problem faster, moving quicker, and keeping up the pace. That is a lesson every logistics planner needs to remember.

6. Dyer, The Amphibians Came to Conquer.

9. Dyer, The Amphibians Came to Conquer.

11. Morison, The History of US Naval Operations in World War II.

12. Dyer, The Amphibians Came to Conquer.

Commander Schuck is a supply corps officer in the Navy Reserve and currently commands Navy Reserve Logistics Readiness Center Detachment 219 at Navy Operational Support Center Pearl Harbor. On the civilian side, he is an economics professor at Linfield College in Oregon and holds a doctorate from Washington State University.