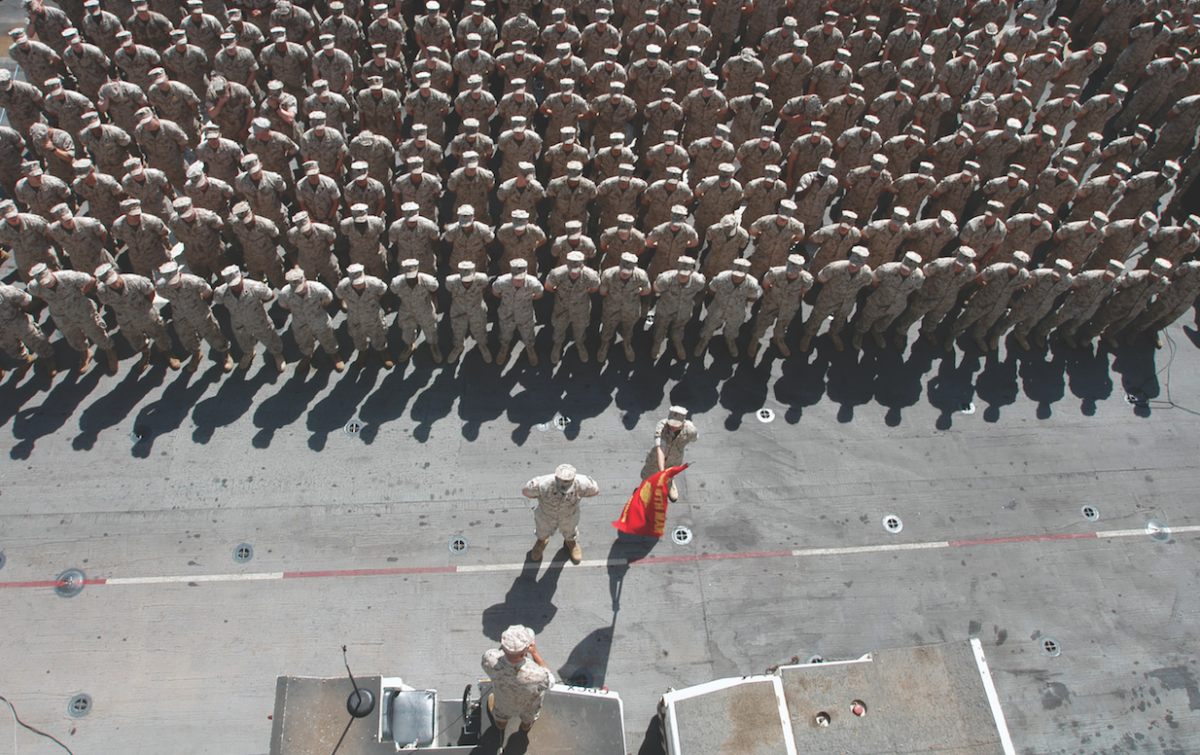 Marine Corps culture is rooted in the service’s long and storied history. Arguably, its culture is what differentiates it from other services and contributes to its fighting prowess and success.

A recent Proceedings article highlighted the need to “foster an inclusive culture” to reach the Commandant’s goal of a 10-percent female Marine Corps.1 The article also makes the case for strength through diversity. Yet, the Commandant recently had to deal with a revenge porn scandal that alienated female Marines and is symptomatic of a culture that runs counter to the goal of a diverse Corps.2 The Marines have been battling with issues such as this for years.3 It seems the very culture that makes the Marine Corps adaptable and successful on the battlefield makes it difficult to integrate women into combat units.

As in any organization, Marine Corps culture must evolve to fit the ever-changing environment in which it operates. Engineers know: what can be measured can be changed. Or, to put it another way, do you really understand something you cannot measure? To this point, organizational culture theory offers tools that can measure culture, enable a deeper cultural understanding, frame the narrative, and aid in change.

Organizational culture includes shared language, notable historical achievements or milestones, and identifying features such as uniforms. It also includes underlying values and assumptions and how those show up in everyday situations. It is the glue that binds an organization together. Moreover, organizational culture is linked to performance. While culture often is perceived as static, it changes over time in response to internal and external pressures.4

The Competing Values Framework is a theoretical construct that structures organizational culture in terms of two key sets of parameters: flexibility and discretion versus stability and control in one dimension, and internal focus and integration versus external focus and differentiation in the other.5 The framework produces four characteristic culture types: clan, adhocracy, market, and hierarchy. Organizations tend to have a dominant type, but most organizations also have some elements of each type present. Figure 1 summarizes the framework and provides examples of each of these characteristic cultures. The Organizational Culture Assessment Instrument (OCAI) measures culture in terms of the Competing Values Framework.

Frameworks are valuable because they allow leadership to look at common themes and trends and make connections. Organizational culture profiles can serve as road maps for cultural management or change and tools for assessing the progress of cultural change initiatives. 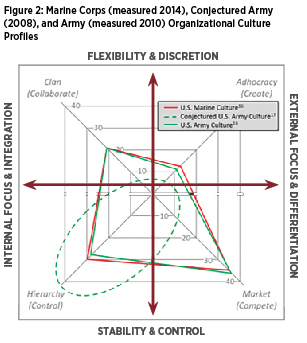 In 2014, the OCAI was administered to a representative population of successful mid-career Marine officers.6 Figure 2 is a profile showing the results. For comparison, the figure shows a conjectured Army organizational culture profile from a 2008 Army War College study by Stephen Gerras, Leonard Wong, and Charles Allen.7 It also presents the results of an OCAI from 2010 for a representative sample of successful mid-career Army officers.8 The results suggest the Army and Marine Corps both have market-dominated hierarchy cultures; that is, they are organizations with an external focus that value stability and control.

Marines believe they are culturally different from the Army. Indoctrination from boot camp onward reinforces this—it is an indisputable part of the Marine Corps narrative. Yet, these results suggest the two services are more alike than different. Gerras, Wong, and Allen from the Army War College supposed the Army was a rigid hierarchy.9 But their conjecture was not supported by Pierce’s findings.10 Both these examples highlight the pitfalls of relying on narrative alone.

Measuring something makes it real, makes it tangible, and makes it objectively describable. Augmenting narrative with measured values and in terms of an agreed on framework helps eliminate bias and misconceptions. Then, much like with a terrain map, if you can orient yourself, you can figure out how to get where you need to go. Armed with an accurate picture of where you are, you can figure out where you want to be culturally and have some hope of seeing the desired change come to fruition. In addition, you have a way of verifying that something changed.

So, in terms of the Competing Values Framework, what does Marine Corps culture look like? Contrary to what casual observers might think, the Corps is not a rigid hierarchy. Rather, it is a market-dominated hierarchy with a family feel. “Market-dominated” does not mean it is competing to sell products. Rather, a market culture is one that combines an external focus with stability and control. To put it another way, the Marine Corps is an organization that predominately is focused outward (on the enemy), values stability and control (pursues consistent results), and yet seeks internal integration (teamwork).

The Competing Values Framework can be used as a decision aid to maintain the culture while addressing emerging issues, or it can be used to change the culture to achieve a desired new culture. In either case, being able to verify the outcome through measurement would be useful. Two cases illustrate these orientations.

As the Commandant and other leaders react to incidents like the Marines United scandal, they must make decisions about what to do. The default generally seems to be policy enactment and enforcement. In terms of the Competing Values Framework, this is a hierarchal or control approach. At the same time, the Marine Corps prides itself on pushing decisions and authority to the lowest level. In terms of the Competing Values Framework, this is would fall in one of the two flexibility/discretion cultures. Enacting and enforcing more policies runs counter to the flexibility and discretion maneuver warfare requires, and it can make junior leaders feel marginalized or not trusted. Thus, the default response creates an internal culture clash.

While the framework does not give direction on what to do, it does provide an appreciation for this cultural dichotomy. Armed with this understanding, leaders can make decisions about actions beyond policies that may be necessary to maintain the right cultural balance. The fact is, leaders can policy the Corps to death, and some Marines will find a way around it. There comes a point where you have to develop subordinates and trust them to do the right thing within specified boundaries.

Using the framework, an alternative or supplemental approach to developing policies could be to reemphasize the familial (clan) nature of the Marine Corps. Marines are all brothers and sisters in arms; they take care of each other. Would a good brother post a compromising picture of his sister online? At some level, the Marines United scandal, female integration, minority integration, hazing, and many other challenges are issues of inappropriate relationships or behaviors within in the clan. If Marines really thought of themselves as family or a team or inclusive, or there was no such thing as a black Marine or a woman Marine, just Marines, these problems would solve themselves.

However, this begs the question: Does the culture need to be changed or do Marines just need to live up to their own ethos, expectations, and narrative?

Sometimes the culture does need to change to achieve desired outcomes. Innovation is a clear case. Marine leadership wants Marines to be more innovative.11 In terms of the framework, adhocracies are good at innovation or creating new things. Adhocracies are organizations that are externally focused and value flexibility and discretion. An example would be a Silicon Valley start-up. Adhocracy is the least stressed culture in the Marine Corps profile. As such, Marine Corps culture ensures that the organization is nearly incapable of true innovation. It values stability and control too much.

Hyman Rickover said, “More than ambition, more than ability, it is rules that limit contribution; rules are the lowest common denominator of human behavior; they are a substitute for rational thought.”12 If the Marine Corps truly wants to become an innovative organization, it has to learn to accept failure and trade rulemaking (stability and control) for greater flexibility and discretion. But since much of what the Corps does is enshrined in law or inviolate policy, the structural and cultural change required for the enterprise to become innovative likely is not possible. Rather, junior Marines or organizations such as the Ellis Group will continue to improvise so long as leadership is not looking too closely.

Marine Corps Reserve culture is thought to differ from active-duty culture, creating noticeable operational friction. A preliminary assessment using the Competing Values Framework supports this conjecture. In terms of the framework, the Reserve was found to have a stronger clan culture at the expense of the market culture. This would suggest the importance of being collaborative rather than competitive when working within the Reserve.

Rather than continuing to react to scandal with policy edicts, it may be time for the Marine Corps to consider cultural management. Tools such as the Competing Values Framework offer the insights necessary to address present issues and to innovate to address anticipated future challenges, both internally and externally and operationally and administratively. They also can provide leadership insight into how Marines view the enterprise and their place in it, as well as measure the success of change initiatives. Thus armed, leadership can make informed decisions that allow the organization to remain true to its roots while adapting in response to the environment.

3. J. Schogol, “Marines Have Battled Misogyny for Years: Will It Be Different This Time?” Marinecorpstimes.com, 9 March 2017.

8. J. Pierce, “Is the Organizational Culture of the U.S. Army Congruent with the Professional Development of Its Senior Level Officer Corps?” (Carlisle, PA: Army War College, 2010).

10. J. Pierce, “Is the Organizational Culture of the U.S. Army Congruent with the Professional Development of Its Senior Level Officer Corps?”