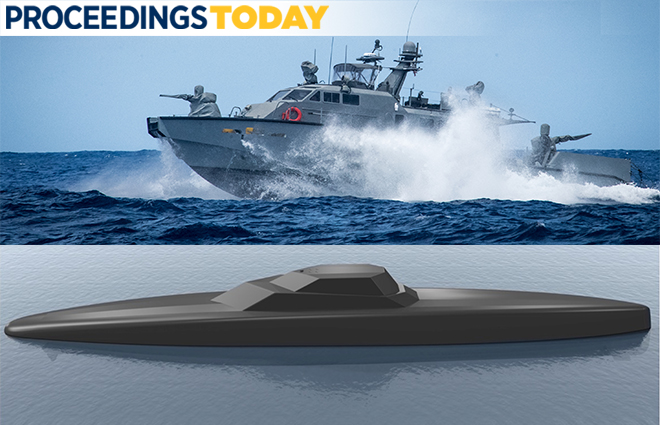 The Navy needs small, lethal, fast, green-water ships and submarines to take the fight to the enemy in the littorals. The Mark VI patrol boat (top) and this HOSS X-1 concept submarine (designed by and copyright J. Scott Shipman of B.B. Hoss, Inc.) are examples of vessels recommended by the New Navy Fighting Machine Study.

A decade ago the New Navy Fighting Machine (NNFM) Study was conducted by the Naval Postgraduate School for the Office of the Secretary of Defense (OSD) Office of Net Assessment.[1] The study’s goal of designing and justifying a fleet of interlocking components was inspired by Rear Admiral Bradley A. Fiske, who entitled his best book The Navy as a Fighting Machine.[2] Fiske meant a fleet must operate like a machine complete in all its moving parts to function for its designed purpose.

The New Navy Fighting Machine Study described an affordable yet more numerous and complete U. S. fleet for the 21st century. By distinguishing smaller, single-purpose, green-water (coastal and littoral) combatants from the large, multipurpose, expensive, heavily manned blue-water (open-ocean) fleet, the study was able to restore a Navy of more than 600 vessels that could be sustained with an annual Ship Construction New (SCN) budget of $15 billion.[3] The fleet’s composition was tested by war games and studies conducted by faculty and students. Their efforts explored the value and limitations of the NNFM force against two first-class enemies, irregular warfare opponents, and for peacetime engagement with friendly states.

The redesigned fleet’s greater offensive capabilities, greater resilience in contested environments, and adaptability across a range of possible futures were evident. For offshore combat in dangerous waters, the Naval Postgraduate School’s Total Ship System Engineering students designed a new “Minuteman”class of missile combatants to comply with surface navy specifications that included eight antiship cruise missiles, a gun, a combat crew of 12, bunks for 30, and a cruising radius of 3,000 nm. New command, control, and communications methods to support a more numerous and distributed green-water fleet were developed and tested in live experiments. Applications of a temporal mesh network with almost undetectable signals—under the rubric of “network optional warfare”—were shown to be vital in contested environments.

Several student theses explored the composition and individual ship designs in detail. A thesis by Navy Lieutenant Juan Carrasco examined in detail the manpower required for the NNFM’s 600 ships. He showed they took fewer billets than the then-existing 280 ship Navy. Carrasco also discovered the sobering fact that in the existing 280-ship fleet its 11 nuclear-powered aircraft carriers (CVNs) took 46 percent of sea-going billets. By reducing the number of CVNs to six or seven and distributing the sea-based air capability more widely, the NNFM freed enough people to operate the new fighting fleet.

Another thesis was by Blue Angel pilot Lieutenant Frank Weisser, who collaborated on the design of a light aircraft carrier (CVL), displacing 28,000 tons, that could carry 20 F-35B aircraft plus assorted helicopters and unmanned air vehicles (UAVs) for scouting and auxiliary functions. Weisser showed that in most scenarios two or three CVLs working together, or one operating in concert with a CVN, would be more adaptable and could deliver firepower more efficiently than sea-based air power operating from CVNs alone.

The NNFM Study defined a sustainable steady-state endpoint, but made clear that no fleet design could be final. Its composition must evolve because the needs, budgets, and designs would change in response to new geopolitical and technological conditions, including unpredictable ones that would unfold during the rest of the 21st Century. It is evident the study’s original composition and distribution of funds must change. It had allocated 10 percent of the presumed annual SCN budget of $15B to strategic deterrence (ballistic missile submarines [SSBNs] and ballistic missile defense [BMD] ships) so that the next generation should not consist solely of the most exquisite and expensive ships that money could buy. That point of view has not been accepted. The impending commitment to the Columbia-class SSBN construction is estimated to be between $5.3B and $6.5B per year while its 15-year-long replacement program is being executed.[4] Consequently a reasonable upper limit of SCN to sustain the future green- and blue-water components cannot exceed about $12B. Taking into account cost growth as well, the revised green-water component of 394 vessels will take not 10 percent but closer to 15 percent of annual SCN. The size of the blue-water fleet probably will need to diminish for the same reasons.

The 2009 study has had little effect on U. S. fleet composition. The Navy continues to buy CVNs, although the numbers have shrunk from 15 to 10 or 11; nuclear-powered attack submarines (SSNs) continue to be a vital component, but SSN numbers have shrunk from over 90 to about 40; and the SCN budget is hard put to maintain 30 large amphibious assault ships, and while the surface fleet is growing the number of guided-missile destroyers (DDGs), the service life of the Aegis cruisers (CGs) is coming to an end with no replacement being built. Moreover, there is not yet a dedicated Navy component designed to take the offensive in dangerous littoral waters

Changes that ought to transpire in the blue-water fleet’s composition can be addressed another day. This is devoted to updating the green-water fleet. (See Table 1 for types, numbers, and costs.) It includes 16 non-nuclear submarines because littoral waters are where they will be most effective. Table 1 does not include unmanned surface and subsurface vehicles, the development of which has lagged unmanned aerial vehicles, but they must be added as their missions and tactics are developed and tested. Changes from the original study are not included because its distribution is controlled by the sponsor, the Office of Net Assessment. Its 60 pages of “rationale” and “justification” for the 21st-century fleet’s composition are still sturdy, however, and have stood the test of time. 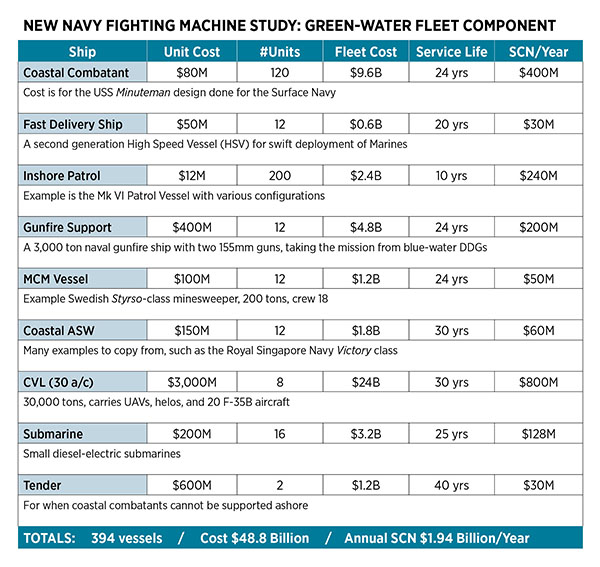 The NNFM study highlighted the need for a “czar” empowered to experiment and develop the technologies, tactics, and operations to fight in contested littoral waters.[5] A 20th-century model for such a czar is Rear Admiral William A. Moffett who hastened the development of naval aviation. Though not an aviator, he was assigned as the first chief of the Bureau of Aeronautics in 1921. This was at a time when the Navy and Marine Corps did not know what its eventual composition ought to be, but they wanted to resist the exaggerated claims of Army Brigadier General Billy Mitchell, who asserted a single air force would be best.[6] Moffett had a relatively large budget at a time when naval arms treaties were in effect and Navy funds were severely constrained. He was given the money to build and man the carriers USS Langley (CV-1), Lexington (CV-2), Saratoga (CV-3), and Ranger (CV-4) and to cover their decks with large numbers of aircraft. He also developed seaplanes and amphibians for scouting and was a champion of dirigibles. Moffett and the Navy had the simplifying advantage of preparing for one predictable enemy, the Japanese fleet.

The best 21st-century exemplar is Admiral William McRaven when he led the U.S. Special Operations Command (SOCom). McRaven had his own budget to cover SOCom’s many operations worldwide. In today’s Navy, the equivalent of Moffett and McRaven would be an admiral empowered to develop all aspects of green-water technologies, operations, tactics, and logistics. The budget and manpower numbers would be a smaller proportion of the Navy budget than Moffett’s, while his responsibilities would be broader, more like McRaven’s in scope.

Here is an outline of a littoral warfare czar’s breadth of responsibilities, largely taken from the NNFM study’s description of the ways the green-water fleet would achieve success by emphasizing offensive maritime capabilities suited to keep the peace or fight in wartime. The potentially contested waters in which the 21st-century Navy must influence prospective enemies are widespread: Baltic, Aegean, and Eastern Mediterranean Seas, the Black Sea, Persian Gulf, South and East China seas, and Yellow Sea are vital today, and other littoral regions may become important in the future. In addition to its responsibility to confront and contain large states, the green-water fleet also will have the ships and workforce best suited to contain pirates, drug runners, and human traffickers in regions like the Caribbean Sea, the Gulf of Aden, and off the Horn of Africa. To the extent that peacetime engagement with the nations of the world is restored as a national imperative, the smaller-sized ships of the green-water fleet would be well suited to conduct port calls, collaborative exercises, and other forms of friendly presence.[7]

The NNFM Study concluded that a new command was the best, perhaps the only, way to achieve a green-water navy intended to fight in dangerous, confined waters. The next best solution would be to assign responsibility to the Commander, Naval Surface Forces. Until he retired, then-Vice Admiral Tom Rowden was developing a “distributed lethality” concept for the surface navy that included ships intended for sea denial that would conduct offensive operations in littoral waters. Whatever the plan and whoever has the authority to develop it, about 15 percent of SCN funds should go to a green-water component to complement the blue-water forces that are saddled with the task of maintaining world-wide sea control. The green-water navy’s primary function of sea denial should be carried out by highly distributable, hard-to-find, single-purpose vessels designed to keep an enemy on the defensive in cluttered, confined waters, and fight at relatively short range.

The green-water fleet is also suited for irregular warfare and can conduct open-ocean patrols when the Coast Guard is overtasked with homeland protection. It is highly effective for peacetime engagement with friendly states. And a fourth role for components of the green-water fleet would be to cooperate with the blue-water fleet in any major future campaign.

To be viable in the face of Russian, Chinese, and other nations’ antiaccess/area denial threats, the U.S. Navy must develop an offensively disposed, highly distributable, forward-based, numerically significant fleet component that can be put at risk and fight in dangerous littoral waters. This green-water fleet proposal would enable the Navy to do all that on a budget that the nation can afford.

[1] They included experts on China, ship construction, Navy budgets (including SCN), extended campaigns in the Aegean and Gulf of Aden, carrier operations in Vietnam, Afghanistan and Iraq, and a retired Air Force general.

[2] Bradley Fiske was one of the Navy’s most innovative officers. In 1916, he wrote his forward-looking book, The Navy as a Fighting Machine. It has been republished in the Naval Institute’s Classics of Sea Power Series.

[3] An SCN of $15B/year seems an upper limit to a sustainable budget for ship procurement. Admiral Mike Mullen as Chairman of the Joint Chiefs of Staff when asked what kept him up nights replied: “The budget deficit and the growing national debt.”

[6] Then-Captain Bradley Fiske was so impressed with the potential of naval aviation that he designed and patented an aerial torpedo before aircraft engines were powerful enough to lift the torpedo in the air.

Captain Hughes is a professor of operations research at the Naval Postgraduate School. He is the author of numerous books and articles on naval warfare and tactics, including Fleet Tactics and Naval Operations, 3rd Edition (Naval Institute Press, 2018).