Skip to main content
The Erie’s four-gun main battery is readily visible in this 7 April 1938 photo. Her secondary 1.1-inch quad machine-gun mounts are in front of the bridge, aft of the tall mainmast structure, and on either side of the fore tripod mast.
Naval History and Heritage Command 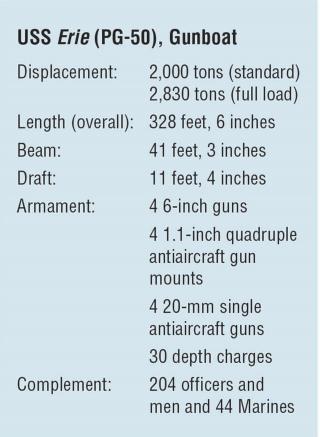 By 1930, the gunboat, despite a long history in the U.S. Navy as a ship type, was not well represented in the service. Only a dozen U.S. Navy ships fell loosely within the gunboat category, and all had been built at the turn of the century. But one provision of the 1930 London Naval Treaty allowed for the construction of an unlimited number of “sloops” with a displacement not to exceed 2,000 tons, a maximum cruising speed of 20 knots, and no more than four guns of more than 3.1-inch caliber with none exceeding 6.1 inches. The USS Erie (PG-50) and her sister, the Charleston (PG-51), would be two of the ships built within the new specifications.

By Norman Polmar, Author, Ships and Aircraft of the U.S. Fleet
During the 20th century and into the 21st, mines have sunk more surface ships than any other weapon.
NH Historic Ships

By J. M. Caiella
For fully two-thirds of its 244-year existence, the U.S. Navy has counted a warship named Essex among its number.
NH Historic Aircraft

By Norman Polmar, Author, Ships and Aircraft of the U.S. Fleet
In many respects, the precursor of the military flying boats of the 1940s and beyond was the Consolidated P2Y.