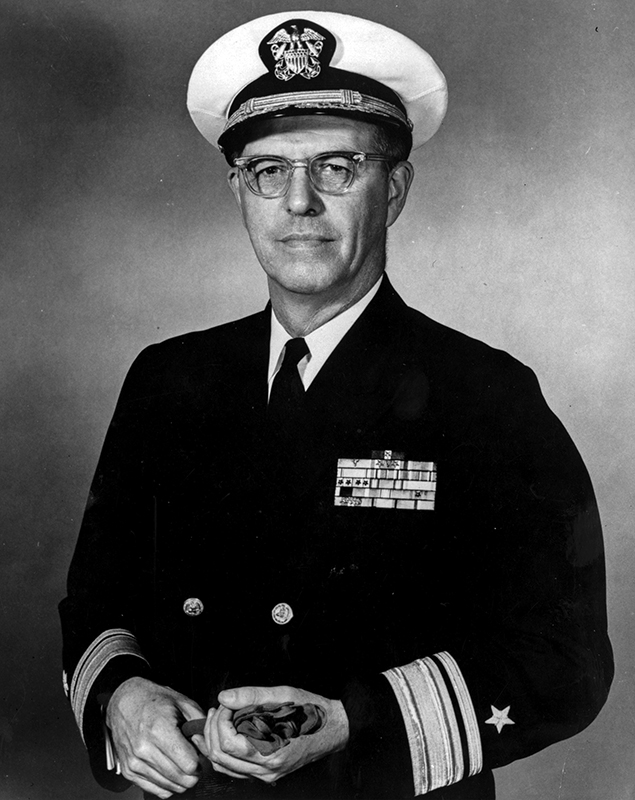 After graduation from the Naval Academy in 1933, Kauffman was forced to resign because of poor eyesight. He was employed by the U.S. Lines Steamship Co. until 1940 when he joined the French Volunteer Ambulance Corps. Subsequently was a bomb and mine disposal officer in Royal Navy Volunteer Reserve. Resigned to accept appointment in U.S. Naval Reserve and in 1946 was transferred to regular Navy. During World War II he set up a Bomb Disposal School, later set up a school in Ft. Pierce for training underwater demolition teams (UDTs). Commanded a unit of UDTs in Pacific, taking part in landings on Saipan, Tinian, Iwo Jima, and Okinawa. After war Kauffman was aide to SecNav Gates and for SecNav Korth set up the Office of Program Appraisal.

In the second volume, Admiral Kauffman's thorough discussion of his years as superintendent of the Naval Academy in the mid-1960s covers everything from alumni pressure on the athletic program to the handling of radical faculty members to presidential orders to beef up minority enrollment. His enthusiasm for this duty is evident throughout as he tackled each new situation. Because of his untimely death before the final tours of his career could be recounted, this concluding volume is supplemented with the insightful reminiscences of those who knew and worked with him. Transitioning with Kauffman from the Academy to his next duty as Commander, U.S. Naval Forces, Philippines, and then to Great Lakes where he was Commandant, Ninth Naval District until his retirement in 1973, was longtime writer and aide Bruce Wertz who shares his observations on his boss's work habits and handling of returning prisoners of war at Great Lakes. Philippine official Alejandro Melchor, a U.S. Naval Academy graduate, discusses the admiral's rough road with Philippine-American relations. Legal officer Horace Robertson, supply officer George Hauge, and aide Chase Untermeyer recount Kauffman's involvement with rest and recreation depots in Asia during the winding down of the Vietnam War and with the investigation of the commandeering of the merchant vessel Columbia Eagle by her crew in 1970.

Based on six interviews conducted by Dr. John T. Mason Jr., from May 1978 through May 1979. The volume contains 648 pages of interview transcript plus an index. The transcript is copyright 1982 by the U.S. Naval Institute; permission must be obtained from Draper Kauffman, Jr., in order to quote from or cite portions of his father’s transcript in published works.