With a career spanning from World War II to Korea to service as Chief of Naval Operations during the Eisenhower and Kennedy years, Admiral Arleigh Burke was instrumental in molding the Navy into the fleet that would eventually prevail in the Cold War and remain dominant to this day. From 1972 to 1981, Naval Institute oral historian John T. Mason Jr. spent a remarkable amount of time with Burke while conducting nearly 20 interviews with him, thus generating a sprawling four-volume oral history magnum opus, supplemented with various writings by Burke. The collection is the requisite starting point for any serious study of this officer and the era of U.S. naval history which bears his indelible imprint.

In this selection from Volume I, Special Series on Selected Subjects, in his fifth interview with Dr. John T. Mason Jr. at his home in Bethesda, Maryland in January 1979, Admiral Burke discusses his tour of duty as Chief of Staff to Admiral Marc Mitscher (1887–1947), commander of a Fast Carrier Task Force in the Pacific in the latter half of World War II. Mitscher, an pioneer in naval aviation, was initially unhappy with the appointment of Burke, a surface warfare officer, as his Chief of Staff, but Burke's diligence and hard work warmed their relationship. The two would sometimes discuss such broad questions as, "what is the most important thing in battle?" as in the clip featured here 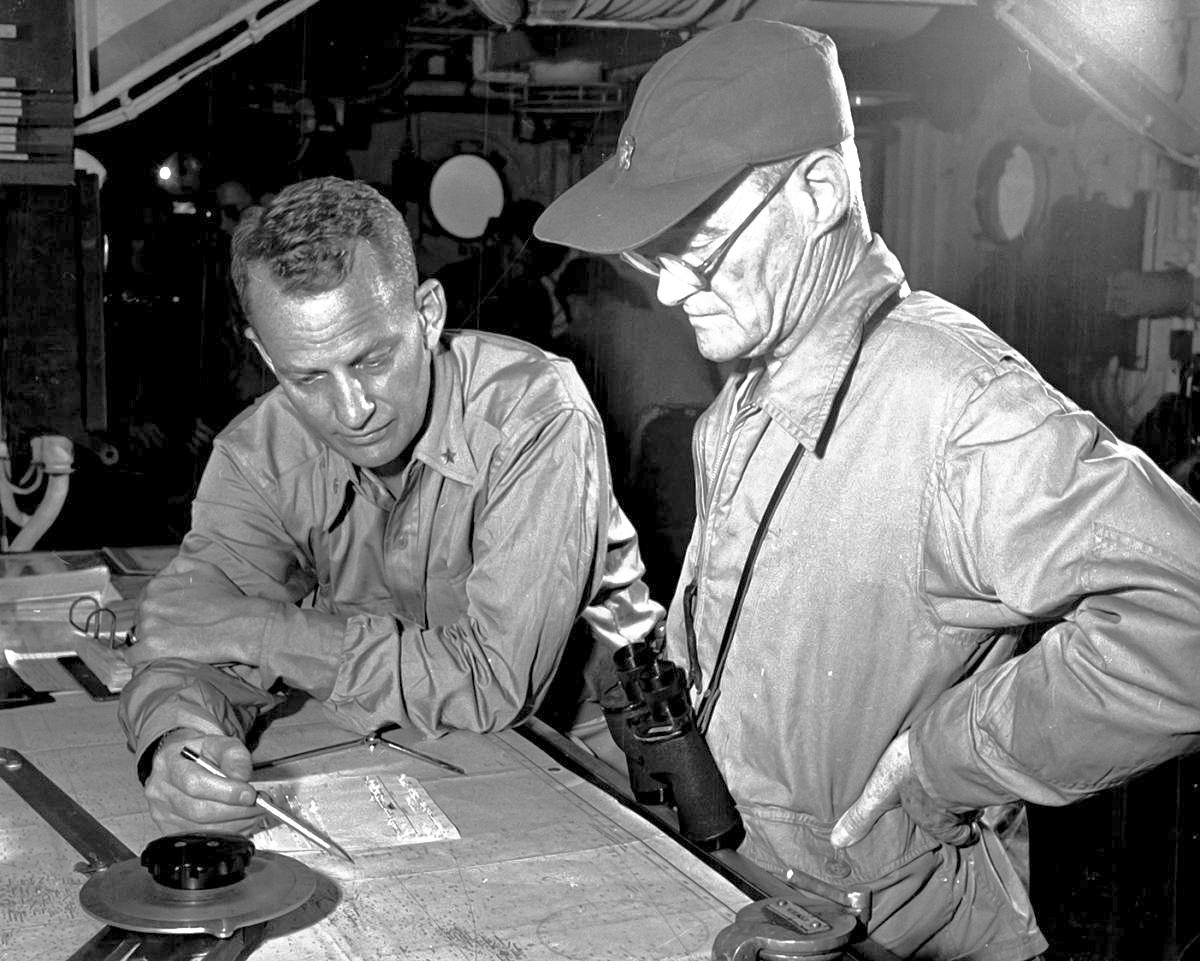 Admiral Burke: I've said many times that this was the period in which Admiral Mitscher became friendly and started to explain to me why he did some of the things. I'd ask him sometimes, but this was the time that I really hoisted aboard. He would sit on the port side of the bridge, looking aft, and I'd go and shoot the breeze with him. I'd ask him some general question like:

"What is the most important thing in battle, Admiral?" or something like that. His answer to that question –  I don't know whether I asked that question exactly or not – would be:

This, I learned, and I learned very well. Of all the characteristics that that man had, that was fundamental. He watched out for his pilots. He trained them well, he demanded performance, he made sure their equipment was the best possible equipment, that it was maintained well, they fought well, they had good leaders. He would rescue them. He did everything – everything he did revolved around the effectiveness of his pilots.

Doctor Mason: Did he ever express a fear that perhaps the pilots themselves would become obsolete in terms of the development of the weaponry?

Admiral Burke: Oh, that always happens. Yes, we talked about that. We didn't have such things as missiles then, although there were missiles at that time being fired in Europe and we had rockets like the Tiny Tim. The possibility of that was enormous, but, he said, you always nurture your fundamental weapon system. It was possible some day just as the carriers had replaced battleships as the fundamental weapon, and something some day would replace the carrier. But there was no way that you could tell when or how at that time, of course, but he recognized that.

Volume I – The CNO Years

These interviews cover largely the period from 1955 to 1961 when Admiral Burke served as CNO. Included in the comments and discussion are: Eisenhower; Dulles; closing of the Suez Canal; development of Sidewinder; the President taking command of fleets away from CNO; DEW Line early warning system; Navy bases in Holy Loch and Rota; Nautilus expedition; Southeast Asia; President Kennedy; Vietnam; Amity cruise to South America; relations with foreign Navy heads; 1960 fire in New York shipyard where the Constellation was being repaired; involvement in hijacking of the Santa Maria; Bay of Pigs; the George Washington's first voyage; and the U.S. merchant marine.

Based on four interviews conducted by John T. Mason, Jr., from November 1972 through January 1973, this volume contains 249 pages of interview transcript plus an index. The transcript is copyright 1973 by the U.S. Naval Institute; the restrictions originally placed on the transcript by the interviewee have since been removed.

The first interview was inspired by an invitation for Admiral Burke to participate in a Japanese TV documentary on the use of Japanese minesweepers during the Korean War. The second interview deals with the modern Japanese Navy and Burke's role in it. The third interview deals with the Korean War when Burke was CNO Forrest Sherman's unofficial representative in the war theater and later when he was Commander Cruiser Division Five. Interviews four through six deal with Burke's long association with Admiral Marc Mitscher--in the crucial battles of the Central Pacific and later when Mitscher commanded the Eighth Fleet and the U.S. Atlantic Fleet.

Based on six interviews conducted by John T. Mason, Jr., from July 1978 through March 1979. The volume contains 555 pages of interview transcript plus an index. The transcript is copyright 1979 by the U.S. Naval Institute; the restrictions originally placed on the transcript by the interviewee have since been removed.

These interviews deal with Admiral Burke's duty on the Navy General Board (April 1947-July 1948), during which time he was asked to make a study of the naval shore establishment.  Instead, he saw a need to establish plans and policy for the years ahead, and the project grew to include the military and all pertinent governmental agencies. Another area covered was his service on the Korean Armistice Delegation during the early months of its existence (July-December 1951) while fighting continued. He also covers his path-finding efforts as head of OP-30, the Strategic Plans Division of the Navy.

Based on four interviews conducted by John T. Mason, Jr., from May 1979 through August 1979. The volume contains 342 pages of interview transcript plus an index. The transcript is copyright 1980 by the U.S. Naval Institute; the restrictions originally placed on the transcript by the interviewee have since been removed.

Part I deals exclusively with the German General Staff, 169 pages. Part II is based on four interviews conducted by John T. Mason, Jr., from July 1980 through October 1980. The volume contains 353 pages of interview transcript plus index. The transcript is copyright 1981 by the U.S. Naval Institute; the restrictions originally placed on the transcript by the interviewee have since been removed.

As background to his role in OP-23, dealing with the unification debates of 1949, Admiral Burke explores the history of the German General Staff, its weaknesses and strengths, as they related to the ideas that surfaced in the unification debates in the United States in 1949. His interviews in Part II further discuss the inherent problems in the military unification program.

This volume employs a format unusual for oral history. Admiral Burke began by writing a narrative on military history, beginning with the French Army in the late 18th century an d proceeding on through World War II. In so doing, he draws a number of lessons on the ways in which military forces have been used and misused during history. This narrative forms the backdrop for his subsequent discussion in the narrative of the establishment in late 1948 of OP-23, a division of the CNO's staff which was created to fight off attempts by the Air Force to take control of naval aviation as part of overall defense unification. The volume concludes with oral history interviews which go into further detail on the points raised by Admiral Burke in his own narrative. Key individuals discussed are CNO Louis Denfeld, VCNO Arthur Radford, Secretary of Defense James Forrestal, and Secretary of the Air Force Stuart Symington. (Two more volumes will conclude Admiral Burke's discussion of OP-23.)