Skip to main content
As of 2022, lieutenant commanders and chief petty officers no longer are eligible to serve on the National Navy Reserve Policy Board. Reserve enlisted personnel and junior officers have incredibly varied and deep professional experience in their civilian careers—it would be a mistake to discount their perspectives when collecting and evaluating ideas for improving the Reserve force.
U.S. Navy (Eric Parsons)

Missing Voices on the National Navy Reserve Policy Board

It appears the Secretary of the Navy lost a valuable source of feedback this year. The National Navy Reserve Policy Board (NNPRB), mandated by U.S. Code Title 10, Section 10303, is composed of Navy and Navy Reserve members who meet to “consider, recommend, and report to the Secretary of the Navy on reserve policy matters.” Selection considerations for board members include “diversity of experiences/thought/ideas” and “willingness to challenge the status quo when appropriate.”

Last year, a Navy Reserve all hands email announced a Secretary of Defense–mandated review of the NNRPB, noting that new members would not be considered until the review’s conclusion at an undetermined date in the future. There is no readily available output from that review, but in October 2022, an All Naval Reserve Force message (AlNavResFor 35-22) announced that the NNRPB is once again accepting nominations for membership. The message does call out one change that likely came from the review: the addition of Training and Administration of the Reserve (TAR) personnel as eligible for principal positions on the board.

A result that was not mentioned, however, is the change in ranks eligible for participation. 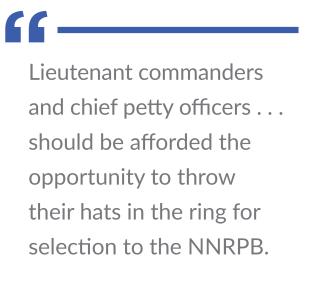 Limiting membership to commanders, senior chief petty officers and above—with particular weight on admiral and captain membership—already risks an element of survivorship bias within the board. These are sailors who have achieved senior rank and, having successfully navigated what can be a complicated and difficult career path, may be more vulnerable to bias in evaluating that process and its associated policies.

Arguably, the NNRPB could be improved by including perspectives of officers and chiefs who are vulnerable to failure of selection and separation at lower ranks, who might have a different view of a system they are struggling to successfully navigate. Of course, those less-senior officers may have more limited experience with the service, but the beauty of the Navy Reserve is that the overall professional experience of its personnel is in no way limited, or sometimes even indicated, by their rank. Reserve enlisted personnel and junior officers have incredibly varied and deep professional experience in government and civilian careers, some hold PhDs—it would be a mistake to discount their perspectives when collecting and evaluating ideas for improving the Reserve force.

The Navy Reserve can grow future leaders by exposing officers and chief petty officers to the upper levels of the Navy earlier in their careers, by offering them opportunities to engage with senior leaders and help shape the policies that will dictate their careers. Lieutenant commanders and chief petty officers with the desire to engage at the strategic level should be afforded the opportunity to throw their hats in the ring for selection to the NNRPB.

Lieutenant Commander Herzinger is an Indo-Pacific Command foreign area officer in the U.S. Navy Reserve. He has been a Naval Institute Life Member since 2018.

By Commander Dave Johanson, U.S. Navy
Reservists are a great resource and bring a wealth of knowledge and talent to the fight.
Nobody Asked Me, But . . .

By Lieutenant James R. Santoro, U.S. Navy Reserve
To support the next Navy Reserve mass mobilization, the current centralized mobilization process needs to be abandoned in favor of a distributed model.