Skip to main content
In the exercise, the MLR’s mobility proved a more effective missile defense than jamming or decoys. MADIS, for example, was insufficient to counter a DF-16 ballistic missile, but if the joint force was able to detect the launch, MLR forces operating out of EABs could successfully displace.
Credit: U.S. Marine Corps (Jack C. Howell)

The ‘Agile’ Wargames that Can Test Force Design, Part 2

Editor’s note: This is the second of three articles discussing the utility of the unclassified wargame in the development of force design efforts. To read the first article covering the context and methodology, click here.

In May 2022, we conducted a series of unclassified exercises and wargames intended to explore the potential of two key elements of Force Design 2030: its concept for stand-in forces and the Marine littoral regiment (MLR). In cooperation with the Marine Corps Warfighting Lab, the School of Advanced Warfighting conducted Exercises Agile Competition and Agile Response and designed several wargames. We examined the possible roles of stand-in forces and the MLR in naval campaigning, both during competition and in conflict.

Notably, the participants used only unclassified and publicly available materials to inform, develop, and execute these events. Despite this limitation, we made several key findings that may be useful to future discourse surrounding Force Design 2030. In addition, the events highlight the wider utility of unclassified wargaming to the national security community. In discussing the methods used, we provide another replicable tool that can be used to conduct independent analysis and synthesis in support of force design efforts that also can incorporate allies and partners who might otherwise be excluded from such events.

The objective for this wargame was to explore how the MLR can provide a credible force to assure allies and contribute to deterring adversaries. The wargame employed the following scenario, methodology, and starting conditions, assumptions, and planning factors:

Scenario. There are indications and warnings that the People’s Liberation Army (PLA) is preparing to conduct a cross-channel invasion of Taiwan. In anticipation, the United States and Japan positioned expeditionary advanced bases throughout the Ryukyu Islands. The MLR mission is to interdict PLA Navy (PLAN) and PLA Air Forces (PLAAF) operating between Taiwan and the Ryukyu Islands to enable future joint force operations to establish a sea line of communication (SLOC) between Japan and eastern Taiwan.

Methodology. The operational planning team (OPT) was divided into teams representing China, Japan, and the United States. Each turn simulated the same 48-hour period between D-1 and D+1. The three planning teams developed and revised courses of action for their respective forces each turn. Each team’s orders were programmed into Command Professional Edition (PE), a computer-based simulation of joint combat that uses publicly available data on real-world combat formations and capabilities.

Several Command PE simulations were run each day. Modifications were made following each run, either adding to or reducing blue force capabilities or modifying the scheme of maneuver. At the end of each day, OPT members compiled all data and voted on whether the MLR constituted a combat credible force, including the degree of joint and/or coalition support needed for the MLR to achieve “combat credibility.” Combat credibility was defined as the ability of an MLR to inflict a mission kill on one destroyer of a PLAN surface action group (SAG).

Using the results from each turn, wargame participants were asked to assess the MLR’s ability to assure allies or deter adversaries. Based on definitions derived from the Joint Operating Concept for Deterrence Operations (JOCDO), each team voted on whether the MLR could achieve deterrence or assurance through any one of the nine doctrinal ways of deterring. Each team had to publicly defend its assessment and justify its rationale for MLR capability shortfalls from the perspective of China, the United States, or Japan. Finally, wargame participants were asked to rank-order the ability of the MLR to achieve each of the nine ways of deterrence from their personal perspectives. Again, members had to publicly defend their rankings and were given an opportunity to modify MLR capabilities in future turns. A total of 21 Command PE simulations were run, and four OPT voting periods were conducted. 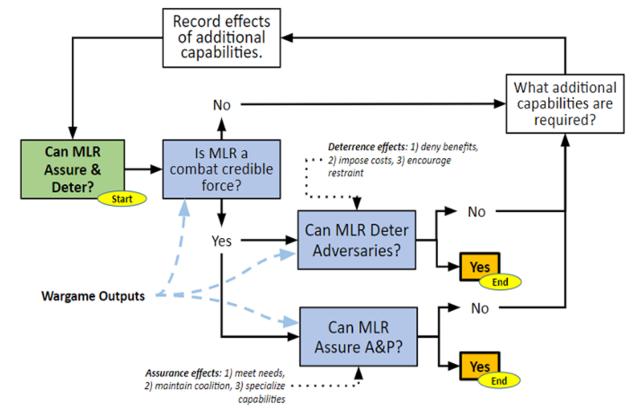 Starting conditions. Within Command PE, game designers represented combat forces for the PLA, the U.S. Marine Corps, and the Japan Self-Defense Forces (JSDF). Each belligerent was assigned the following forces at the start of the game, with forces added and removed across different game iterations per the method described above:

Each simulation began with the MLR located across three expeditionary advanced bases (EABs) northeast of Taiwan. The JSDF occupied two EABs in the same area, with the mission of guarding the Japanese main force operating in and around mainland Japan from PLA forces operating in the Ryukyus. The PLA began movement from mainland China and was tasked with establishing a blocking position north and east of Taiwan to isolate forces on Taiwan and prevent coalition air or naval forces from affecting a future landing operation.

2. The U.S. Marine Corps and the joint force possess sufficient logistical capabilities to support the MLR. This assumption allowed the wargame to focus the MLR’s deterrence and assurance capabilities rather than on the previously recognized challenge that sustainment presents to MLR employment.

3. Access, basing, and overflight is available to U.S. forces in the Ryukyus. Presence in the region was necessary to test the MLR concept.

4. The MLR can share intelligence and targeting data with its JSDF counterparts in the East China Sea. This assumption focused on ensuring that the MLR was able to integrate into a larger collection and targeting network. To keep the wargame at the unclassified level, the OPT decided to integrate the MLR into open-source partner capabilities rather than explore additional joint force capabilities.

Each iteration of Command PE, in tandem with the measured effectiveness of deterrence and assurance, revealed dozens of findings and observations. Because they are bound by the limitations of this particular wargame, these findings are not meant to be conclusive. However, they provide valuable insights that could help shape future discourse on the development of stand-in forces and the MLR. The most significant findings are:

Combat credibility is tied to coalition support. This game defined combat credibility as an MLR executing a mission kill on a PLAN destroyer in a SAG; specifically, the MLR causing an effect that prevented the destroyer from taking further action toward its intended mission. The MLR was identified as combat credible if it maintained some coalition force support. Two factors contributed to this:

While the game did not explore many joint options that could have offered the same capabilities, the limitation to coalition support would be a feasible scenario in which the MLR sought to maintain minimal signature within allied territory.

To be effective, fires should be multidomain and tightly coupled in time and space. In general, the Naval Strike Missile’s (NSM’s) range was sufficient to reach a PLA target, but this range did not always allow for coordinated effects with other fires platforms, particularly those operating from other EABs. The NSM alone was consistently unable to penetrate the defenses of a PLAN SAG. Modifying force packages and capabilities resulted in the following changes to MLR fires’ effectiveness:

Combining MLR deployment with other deterrence and assurance mechanisms significantly enhances the MLR’s effectiveness. The OPT used the nine ways identified in the JOCDO to measure the effectiveness of deterrence and assurance throughout the wargame. In addition, the OPT identified surprise as an assurance and deterrence effect and added it to the measurement tool. Of these, the following ways achieved deterrence of PLAN forces or provided assurance to allies: forward presence, force projection, active and passive defense, and security cooperation, military integration, and interoperability. 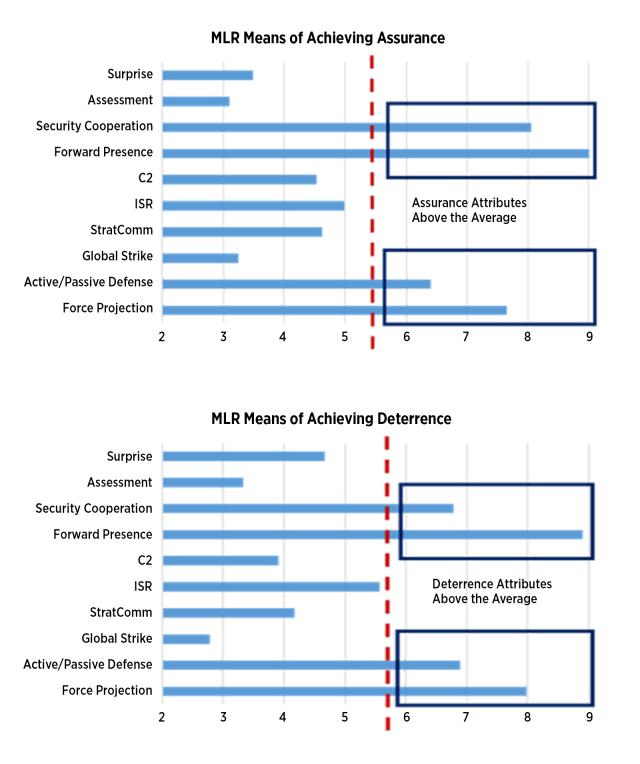 While not conclusive, the findings are suggestive of avenues for further exploration by those involved in planning for naval campaigning and force design. They offer data points indicating the MLR can be combat credible when in receipt of coalition support, that tightly coupling MLR fires in time and space with other fires in multiple domains increases MLR combat effectiveness, and that the likelihood of the MLR achieving deterrence and assurance is greatly enhanced when combined with other mechanisms.

The larger lesson is that useful wargames can be developed and executed to explore emerging concepts using exclusively unclassified sources. When service chiefs give service-level direction, as with the 38th Commandant’s Planning Guidance, it is a call to the entire service to row in a common direction. While various organizations within the services are better equipped and resourced to explore certain elements of difficult problems, the force writ large has more talent and capability than any individual command. In addition, the inclusion of allies and partners is a key component of the stand-in forces concept. Any opportunity to develop wargames that can avoid the hurdles of classification and permit the inclusion of allies and partners will add more rigor to the concept and provide a form of assurance to those allies and partners in turn. Those who strive for solutions can develop and conduct wargames that support the cause, no matter where they serve.

Lieutenant Colonel Rusten is a Norwegian Army officer and an operational planner.

Major Russell is an Army armor officer and an operational planner.

Major Hamilton is a Marine communications officer and an operational planner.

The ‘Agile’ Wargames that Can Test Force Design, Part 1

Design the Littoral Combat Team Around Its Core Mission