Skip to main content
Colonel Gordon Keiser, U.S. Marine Corps (Retired), worked at the Naval Institute for 17 years as director of operations and an editor on the Proceedings team. (Gordy is on the right in this picture with author Herman Wouk at a 1995 Naval Institute event.)
Credit: U.S. Naval Institute

He took the Marine Corps seriously but never himself. “He was born with a gift of laughter.” 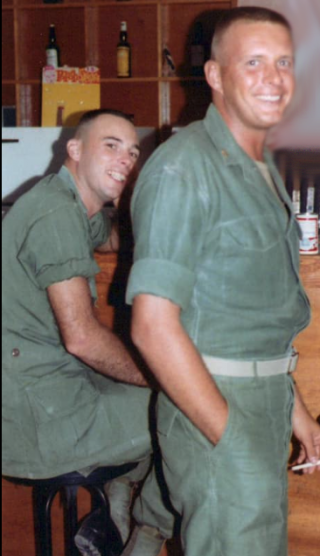 The quote from author Rafael Sabatini helps explain why everyone who met him found Gordy so engaging. He could talk to anyone. It made no difference whether you were an ambassador or a private in the rear rank. He joked with waitresses and hotel clerks, he wrote letters to young majors and old commanding officers, he called friends in hospitals, he left messages to pass the news or pass the time. He could shock an audience with his outrageously ribald jokes, while his infectious laughter as he worked his way toward the punch line brought his listeners along with him. Well, most listeners. . . .

It was a gift applicable anywhere. Like the time at the Officers Club bar at Marine Corps Recruit Depot Parris Island, when a newly commissioned warrant officer standing nearby said he did not feel really accepted as an officer. Hearing this, Gordy, then a captain and director of Drill Instructors School, swiveled around on his bar stool, embraced him, planted a big kiss on the top of his shaven head, exclaimed, “But we love you!” and invited him to join us for a round.

He was commissioned from Virginia Military Institute in 1959, beginning a 30-year Marine Corps career. Along the way he graduated from Army Ranger and Airborne and Navy SCUBA Schools, led Force Reconnaissance platoons, was decorated for bravery while serving two combat tours advising Vietnamese Ranger and Marine Corps units, picked up a master’s degree from Tufts University, wrote a book on defense unification that stayed on the Commandant’s reading list for years, and commanded the 24th Marine Amphibious Unit (Special Operations Capable) in the Mediterranean and Persian Gulf. He retired from active duty in 1989 and worked for another very successful 17 years as the Naval Institute’s Director of Operations, Director of Seminars, and senior editor for Proceedings.

He was larger than life. Those who knew him remember him for a thousand different things, one of them a priceless naval message. While commanding the 24th MEU (SOC), Gordy received a message from the Defense Attaché Office in Cairo regarding an upcoming port visit to Alexandria. The message expressed the American Consul’s “serious and valid concern over keeping 300 Marines aboard Saginaw occupied and out of trouble” during the visit. Gordy composed a response that has ensured him immortality throughout the armed forces. Addressed to the perpetrators, info the world, it began by stating the message was “being scrutinized to determine if it might be a bogus message planted by foreign agents.” He then characterized it as the hands-down winner of all the foolish messages and directives he had seen over his 28 years of service. It got better as he warmed to his subject.

His retirement ceremony at Camp Lejeune, where he went out with colors flying, brought yet another moment to treasure. General Al Gray, former Commandant of the Marine Corps, was in the audience on that sunny morning along with Gordy’s Force Recon comrade, Lieutenant Colonel Ron Bub. Pacing back and forth on the grass outside headquarters, making every word count, Gordy was eloquent, his words evocative. He closed by reflecting that although he owed the Marine Corps everything, the Marine Corps owed him nothing. Then, turning to face the crowd, he planted both feet firmly and said that he was leaving the Corps with one lingering regret. We waited spellbound, and he did not disappoint. After a dramatic pause, and with a dead serious look, he delivered his final zinger: “I never won Yard of the Month.”

You had to love him.

Lest We Forget: Tales of Chesty: 'He Was a Character'

A. Denis Clift
Then-Lieutenant Colonel “Chesty” Puller (center) on Guadalcanal in 1942. His career would span four decades and two world wars and earn him a place as one of the great historical ...
P Article

Lest We Forget—Sketches on an Envelope Create the LST

By A. Denis Clift<p>
John C. Niedermair grew up on Staten Island, New York, in the 1890s, explored the big port’s maritime fringes, and received a scholarship to the Webb Institute of Naval Architecture ...