Japan’s new Taigei class of diesel-electric submarines is anything but conventional. The new boats were designed for, and from the outset fitted with, lithium-ion batteries rather than the lead-acid type historically used in non-nuclear submarines. They provide the Japan Maritime Self-Defense Force (JMSDF) with some of the most advanced underwater performance of any submarine force in the world. 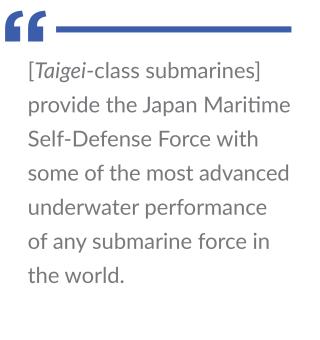 Lithium battery advantages have been well known for generations, and the batteries are a common element in consumer technology. Their onboard use in submarines, however, remains extremely limited because of the inherent danger posed by hydrogen gas and intense heat that can be released by the batteries in the event of malfunction and fire. The JMSDF and its defense industrial base have apparently learned to manage these challenges by pioneering battery technology and safety through an extensive research, design, and testing program dating back more than 20 years. Two submarines of the older Sōryū class, the Ōryū and Tōryū, were recently commissioned with lithium batteries and helped perfect this technology. These capabilities now have matured a step further with introduction of the Taigei class.

The Taigei has two diesel engines, lithium battery cells, and an electric motor linked with a single shaft and pump jet propulsor. This provides a reported top underwater speed of 20 knots. The submarine has an X-configuration stern rudder for enhanced maneuverability.

The Taigei measures 276 feet with a 30-foot beam and a 34-foot depth. Displacing roughly 3,000 tons (surfaced), she incorporates several notable enhancements over the Sōryū class, such as a new combat management system, enhanced sensors, and a stealthier design. The Taigei has a crew of roughly 70 personnel and includes a separate compartment for up to six female submariners. Weapons are launched via six 21-inch bow torpedo tubes and can include Japan’s newest heavyweight torpedo, the Type 18, or the older Type 89 torpedo, with capabilities similar to the U.S. Mk 48 advanced capability variant. UGM-84 Harpoon antiship missiles can also be carried. Class namesake Taigei was built at the Mitsubishi Heavy Industries shipyard in Kobe and commissioned on 9 March 2022. Sister Hakugei was launched on 14 October 2021 by Kawasaki Heavy Industries in Kobe and is expected in service by spring 2023. The third boat Jingei was launched this past October for delivery by early 2024. At least nine Taigei-class submarines are planned for service in the years ahead.

By Eric Wertheim
As Finland readies for NATO membership, its fleet is preparing for the next generation of maritime defense in the Baltic.
P Combat Fleets

By Eric Wertheim
The Jiangdao-class Type 056 and Type 056A guided-missile corvettes epitomize the rapid growth and expansion of China’s maritime fleet during the past decade.
P Combat Fleets

By Eric Wertheim
Commissioned into service at Brest on 3 June, the attack submarine Suffren is the first of six next-generation Barracuda-class submarines for the French Marine Nationale.