Skip to main content
Small, mobile, and lethal, Marine Corps stand-in forces will be ready to deploy on short notice to disrupt an adversary’s plans at every point.
U.S. Marine Corps (Jackson Dukes)

Small, mobile, and lethal, Marine Corps stand-in forces will be ready to deploy on short notice to disrupt an adversary’s plans at every point.

"Adapt or perish, now as ever, is nature’s inexorable imperative."

Change is hard, particularly for those as bound to tradition as are U.S. Marines. But change is inevitable in the business of war. In my 34 years of service I have seen significant evolutions and revolutions, all accompanied by howls of “the Old Corps is dead!” It is rumored that a private first class in 1776 lamented how much the Marine Corps had changed since he enlisted at Tun Tavern the year before. I say this in jest, but skepticism about change endures.

Recently, the Marine Corps published A Concept for Stand-in Forces, which lays out a new vision for the employment of Marines in support of naval campaigns and joint operations.1 Like all new concepts, it has caused much discussion and some amount of concern.

To be clear, A Concept for Stand-in Forces does not change the things about the Marine Corps that are tried and true, but rather how we prepare for the next fight. That is a subtle but important distinction. The Marine Corps is the United States’ crisis response force. It has been for decades, and it will remain so. We continue to train and deploy Marine air-ground task forces (MAGTFs) and recognize that the whole of a MAGTF is greater than the sum of its parts. We remain an amphibious force that, partnered with amphibious ships, provides our naval and joint force commanders the ready and capable forces they need. And finally, the ethos of Marines has not and will not change. We will continue to attract, recruit, and train warriors who are proud to be the “first to fight”—and to do so with honor.

The changes we are making within the Marine Corps are driven by the requirement that we be the most ready when the nation is least ready to deal with the threats we face. The Biden administration’s Interim National Security Strategic Guidance designates the People’s Republic of China as the primary long-term threat to the nation’s interests and security, calling it “the only competitor potentially capable of combining its economic, diplomatic, military, and technological power to mount a sustained challenge to a stable and open international system.”2 The Trump administration’s 2018 National Defense Strategy describes China in much the same way.3 In addition, the daily intelligence briefs Marine Corps leaders receive—which are not available to the public or the majority of defense media analysts—contain our best estimates of China’s capabilities and intentions. This top-level guidance and intelligence point to China as our “pacing threat”—the threat against which we must measure our ability to deter and win. It is this analysis that compels us to adapt.

Since 1945, the United States has dealt with many foes, but none were true peers. This is no way diminishes the heroism of those who fought in Korea, Vietnam, Iraq, or Afghanistan, many times against elements of or equipment from a peer competitor. It is simply a fact. China’s advances, as well as those of other potential adversaries, are changing the character of armed conflict. Weapons wielded by tactical units have ranges of hundreds of nautical miles, with precision that was unimaginable just a decade ago. The ability to communicate, once thought to be ubiquitous on the modern battlefield, is now challenged from our home stations all the way through the objective. Even U.S. air and naval superiority can be challenged by peers and near-peers.

There are roughly 80,000 Marines aligned to missions in the Pacific, with nearly 24,000 of them forward deployed or stationed in theater. They have been there since the end of World War II, and they will remain there, reassuring our allies and partners and deterring our adversaries. They will fight tomorrow if a war begins, but without change, they will do so with decades-old tools and organizations that are not up to the standard of a peer conflict. This is not acceptable.

U.S. strategy with respect to China is to use every instrument of national power across domains to achieve “integrated deterrence.”4 While the Marine Corps must retain its ability to strike and destroy adversaries in its assigned sector, we must also be capable of deterring the pacing threat. Our answer to these tasks is stand-in forces.

Stand-in forces are units that are task-organized, trained, and equipped to disrupt an adversary’s plans at every point on the competition continuum. They are strategically placed where they can collect targeting data, strike to close choke points, or herd adversaries into areas where U.S. naval and joint forces can bring more weapons to bear. These light, highly mobile forces have capabilities that will force an adversary to deal with a unit that previously would have been too small to care about. They can persist independently for days if needed and can reposition with organic mobility assets to avoid being targeted. Their physical and electromagnetic signatures are so low they are not easily detected, and if detected, they possess the lethality to fight. 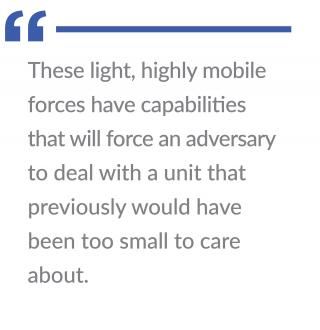 Finally, stand-in forces are designed to place as little sustainment burden as possible on a logistics system already in need of improvement. They require less support than previous formations because they can produce some of their own water and power; use existing food and fuel sources; and be resupplied by air, surface, and subsurface means. These capabilities enable stand-in forces to provide both the credible deterrent and the credible combat power that will best support combatant commander requirements and reassure U.S. allies and partners.

The Marine Corps’ expeditionary capability and forward posture make us uniquely suited for stand-in force operations. Our organic mobility, always in high demand, is a key enabler of this concept. L-class amphibious warships, light amphibious warships, KC-130J tankers, MV-22 Ospreys, and CH-53K King Stallion helicopters, all organic to the Navy–Marine Corps team, support the mobility that makes stand-in forces possible. While other elements of the joint force must wait for assets to move them, Marines are already present on board our organic assets, causing an adversary to react.

Stand-in forces also retain the unique flexibility and range of capabilities that have made naval expeditionary forces so valuable in the past. Stand-in forces are of incredible use in training and supporting U.S. allies and partners. They have small footprints and can easily come and go from host-nation shores, which is exactly what so many U.S. allies and partners ask for in today’s challenging diplomatic times.

These forces also are of high value against lesser threats. Russia, North Korea, Iran, and violent extremists will be equally challenged to deal with small, mobile, lethal forces that have low signatures and high levels of training. As a battalion and regimental commander in Iraq and Afghanistan, respectively, I would have been well-served to have my units organized, trained, and equipped in such a way.

Stand-in forces are not just roving bands of vulnerable Marines, placed on small islands and left to their own devices in the hope that an enemy ship might one day blunder within range. Yes, there are areas in this concept that need improvement, but these difficulties are solvable.

New procurement initiatives, such as the light amphibious warship, MQ-9A Reaper unmanned aerial vehicle, and Navy Marine Corps Expeditionary Ship Interdiction System (NMESIS), which fires the Naval Strike Missile, are essential to maximizing stand-in forces’ potential. We must make significant improvements to our communications networks to support the speed and security levels that can bring the best weapon to bear on a fleeting target or reveal an adversary’s nefarious actions to the world. These data transport layers are complex and must be resilient. We also have more work to do within our logistics enterprise and must make our stand-in forces lighter and more energy independent. None of this is easy or inexpensive, which is why we must move boldly, swiftly, and now. U.S. adversaries also are moving, and every day of delay is a gift to them.

We will continue to task organize and train units for crisis response, raids, and assaults. All units, regardless of designation, will receive the upgraded communications gear, weapons, and much of the training that will make the MLRs so useful. The key is that MLRs will exist in a task-organized state at all times, ready to deploy on short notice to designated locations from which they can place the adversary in a position of disadvantage and prevent its plans from succeeding.

The Marine Corps’ stand-in forces and crisis response forces provide the joint commander options, often at a higher level of risk than other elements of the force. This is the price of being first to fight. It is not false bravado; it is the Marine Corps’ legacy, its ethos, and who we will always be. The question is: Will we have the courage to make the hard choices and the hard changes to provide Marines with the tools, organizations, and training required to be successful? When tensions rise or missiles fly, will we have prepared them for the fight? Being the “most ready” means that we prepare to fight the toughest adversary, regardless of whether we think this is the most likely fight. To do otherwise would be a disservice to the 19-year-old lance corporal who rightly expects to be trained and equipped for the worst day and to be faster, stronger, stealthier, and more lethal than that adversary.

I spent my time at The Basic School and my first years in the Fleet Marine Force preparing to fight a Soviet motorized rifle regiment. Somewhere in my sea bags from that time are flashcards of BTR-60 armored personnel carriers, BMP-1 infantry fighting vehicles, and the ZSU-23-4 antiaircraft weapon system, and yet, when I went into combat in Desert Storm and to Liberia for a noncombatant evacuation operation, my units performed extremely well. We performed well because our leaders trained us for the most demanding fight we might see. The fundamentals that underpinned our training, our mental and physical toughness, and our willingness to fight for our nation and for each other made us prepared for anything. Today’s Marines will be ready for the same, as long as their leaders insist on preparing for the most difficult challenges ahead.

Stand-in forces are what the nation needs from the Marine Corps. Marines forward deployed inside an adversary’s weapons engagement zone must be organized, trained, and equipped to deter conflict and execute their assigned missions if deterrence fails. Marines are forward now, but they lack the tools needed for the future. The changes underway in our Marine Corps will provide them with those tools and ensure we carry on our service’s legacy of being the most ready when the nation is least ready.

Change is hard. But there is no time to waste or to admire this problem. We have already moved out to face this challenge and will continue to do so. We must adapt or perish. 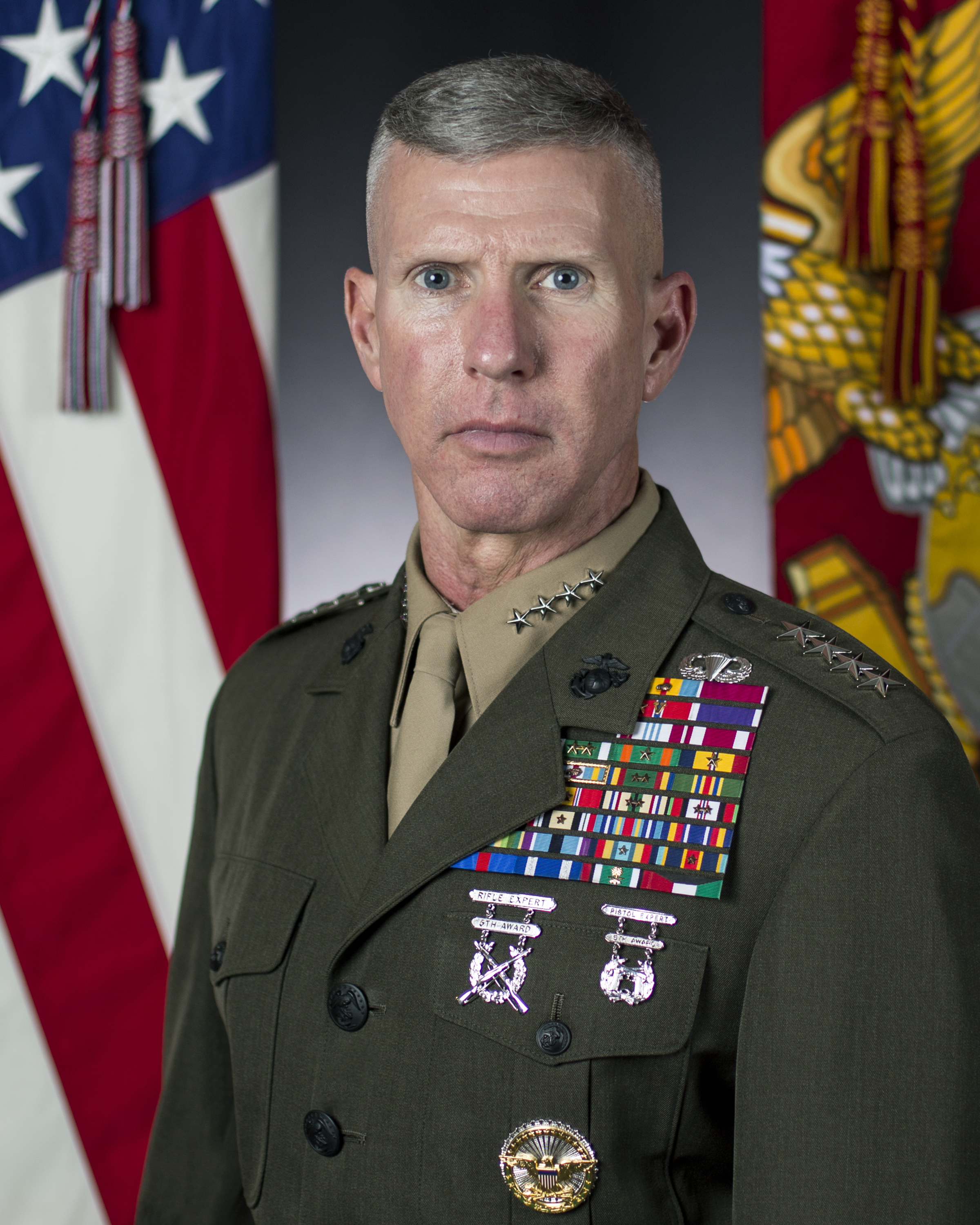 General Smith is the 36th Assistant Commandant of the Marine Corps.

A Concept for Stand-In Forces

A Forward-Deployed Naval Force for the Eastern Mediterranean

General Eric Smith, U.S. Marine Corps, discusses why the nation needs stand-in forces. His article is featured in the April issue of Proceedings.