Skip to main content
Refueling strike aircraft from seaplanes was tested during the 1950s, with both the R3Y Tradewind (shown) and P6M Seamaster.
U.S. Naval Institute Photo Archive

The carrier air wing has a range problem. Advances in antiship weapons continue to force aircraft carriers to operate farther from adversary shores. Simultaneously, air wing range has decreased markedly since its peak during the Cold War. The air wing—and with it, the carrier—is being squeezed into a zone of irrelevance: a carrier not survivable within air wing striking range and an air wing not in range of striking from where the carrier is survivable.1 Current solutions are failing. Buddy tanking—in which combat aircraft are used to refuel other combat aircraft—is burning through useful aircraft life and mortgaging the future of naval aviation.2 The MQ-25 will help this problem, but maybe not enough against Chinese long-range antiship missiles, and it will not be operational in the fleet until 2025.

The Navy must look beyond organic tanking options to ensure the continued relevance of naval aviation. Inorganic tanker support, in the form of seaplane refueling squadrons, would enable a drastic increase in air wing range. Seaplanes, not tied to a carrier, can be significantly larger and in turn provide a greater fuel transfer capacity. In addition, they free hangar and flight deck space for more strike aircraft, and they could support F-35s operating from amphibious assault ships or so-called lightning carriers, which cannot carry the MQ-25.

Air Wing Range and the Tanker

As naval analyst Jerry Hendrix writes, “The end of the Cold War—followed by the decision to cancel the replacement aircraft for the A-6 Intruder, the A-12 Avenger II—began a precipitous retreat from range and the deep strike mission that had long characterized the carrier air wing.”3 This retreat from range largely has been the product of the trade-offs inherent in aircraft design. The requirements for speed, maneuverability, payload, and stealth generally come at the expense of range. While the F-35C improves on the range of F/A-18E/Fs, it does so at the cost of some maneuverability and, if it is to retain its stealth, payload capacity.4 The F-35C’s combat radius is approximately 800 miles (670 nautical miles), still well within the range of adversary threat systems.5

The easiest way to solve the problem of design trade-offs is through tanker support. Instead of requiring an aircraft to carry the necessary amount of fuel, a tanker allows the aircraft to save fuel weight by providing it midmission. For example, consider the Vietnam War–era strike package of A-6 Intruders supported by KA-3 Skywarrior tankers. The KA-3 provided 29,000 pounds of gas approximately 500 miles from the carrier. By topping off A-6s before their strikes, a single KA-3 could extend eight aircraft an additional 250 miles, for a total combat radius of nearly 1,250 miles.

The problem with tanker aircraft, however, is their size. The KA-3 was a large aircraft. It took up more than twice the space of an F/A-18C Hornet.6 For every KA-3 on board a carrier, the ship gave up approximately two A-6 strike aircraft. The brutal math of tanker size and capability is again at work with the MQ-25, the Navy’s unmanned tanker aircraft. The MQ-25 takes up much less space than a KA-3 aircraft; however, with this decreased size comes decreased fuel capacity.

The MQ-25 will be able to deliver approximately 15,000 pounds of fuel at just short of 600 miles from the carrier.7 A single MQ-25 would be able to extend eight F-35Cs by only 75 miles.8 The reason for this decrease is twofold: The MQ-25 is smaller than previous Navy tankers and has less “give”; and the F-35 consumes more fuel than the A-6 did. Increasing the number of MQ-25s can make up for their small size, but at the cost of strike aircraft.

The other option is inorganic tanking, which is the use of tankers not directly associated, or based, on the aircraft carrier. The best example is the use of Air Force tankers, which are monsters, even compared with the KA-3. Table 1 shows the fuel offload capability of the big-wing tankers relative to the KA-3 and MQ-25. These tankers can drastically extend the range of an air wing, but they also are not without shortfalls. For one, they would be heavily tasked supporting Air Force strike aircraft and potentially less available to support naval aviation. In addition, tankers and tanker bases would be high priority targets for adversary weapons. 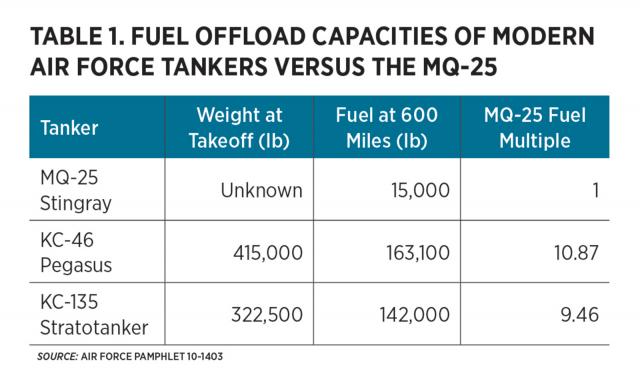 The Navy needs inorganic tanking support uniquely suited to its mission of projecting power from the sea. Enter the seaplane. Refueling strike aircraft from seaplanes is not a new concept. In fact, it was tested during the 1950s with both the R3Y Tradewind and P6M Seamaster. Because these seaplanes were not limited by catapult/arresting gear or hangar space, they could be bigger and in turn provide more fuel to strike aircraft. They also did not take up valuable space on board the carrier. Table 2 compares these seaplanes—1950s technology converted to the tanker role—with the Navy’s newest tanker, the MQ-25 Stingray.

This comparison even discounts the utility of the seaplane. Because seaplanes are not tied to the carrier, they can be “based” more efficiently, i.e., along strike mission axes, allowing them to spend less fuel on their own movement and, in turn, give more fuel to strike aircraft.

A seaplane tanker force would require three elements to operate effectively: seaplanes, seaplane tenders or bases, and fuel. A modern seaplane easily could be designed to carry approximately 100,000 pounds of fuel with greater efficiency.9 Combined with optimized basing, this would allow a single seaplane tanker to equal, if not exceed, a KC-135’s fuel transfer capacity. Additional seaplanes would only improve this dynamic.
A modern seaplane would weigh approximately 200,000 pounds at takeoff and have a wingspan of around
100 feet.

A seaplane tender would be needed to help service the aircraft. While the Navy does not currently possess seaplane tenders, it could convert retiring fleet oilers for the role.Modifications would be required, such as the installation of a crane and strengthening of the deck, but this would alleviate the need for new construction. Dedicated seaplane tenders, if the concept was proven out, could provide more capability with associated benefits. If the seaplanes were operating close to shore, seaplane tender capability could be land-based instead.

The last element required in a seaplane tanking force is the fuel. A squadron of ten seaplane tankers could easily require in excess of a million pounds of fuel per day to support strike aircraft. With this requirement, the utility of Henry J. Kaiser–class oilers as seaplane tenders becomes apparent. Designed for carrying large amounts of fuel, these oilers can carry just over 50 million pounds of fuel. This would allow weeks of sustained seaplane tanking operations without the need for replenishment. Another option would be to have the seaplanes operate close to the carrier group and its oiler, although this would preclude optimal positioning. Another concept is developing floating bladders.10 Finally, if seaplanes were tied to land bases, the fuel could be stored ashore.

Opponents of a seaplane tanker force may claim they cost too much, they cannot operate in bad weather, they will not have a sustainable fuel supply, and other systems could perform the mission better. Each of these objections will be explored in turn.

Seaplanes cost too much. Developing a 45-tanker seaplane force—enough for three active squadrons with 10 aircraft each and one reserve squadron with 15 aircraft to also support training and testing—should cost no more than $15 billion, or just over $300 million per aircraft including development costs.11 It is possible that the simple requirements of the program—to carry 100,000 pounds of fuel and be capable of landing and taking off from the water—could allow for a lower than expected cost. It is not cheap, but neither are the tens of billions of dollars spent on carrier groups and air wings, which could be rendered impotent without tanker support.

They cannot operate bad weather. A common misconception about seaplanes is that they need good weather to operate. The P6M Seamaster—again, 1950s technology—could operate in wave heights of up to 9 feet. The Japanese US-2 seaplane, currently in use by the Japan Maritime Self-Defense Force, can operate in nearly 10-foot seas. With localized bad weather, seaplanes simply could move to a different part of the ocean. Using the P6M Seamaster’s performance as a baseline, seaplanes would be able to operate in the northern Pacific without any restrictions for 73.5 percent of the year (waves under 6 feet), with weight restrictions for 14.9 percent of the year (waves above 6 feet but below 10 feet), and unable to operate for 5.9 percent of the year (waves above 10 feet).12 Adversary operations are also constrained by the weather.

Fuel supply is unsustainable. A seaplane tanker force would require large amounts of fuel. While this partially can be solved by using converted fleet oilers, adversaries are likely to target fuel supplies both on shore and at sea. This is true regardless of the chosen operational concept. Seaplanes, not tied to any runway, could make use of more distributed fuel supplies than many other forces. Regardless, if U.S. forces are unable to secure fuel supplies, they will have far bigger problems.

Other systems could perform the job better. While it is possible that other operational concepts could result in a more capable or cheaper solution, this author is unaware of any such proposals. Undoubtedly, the next generation of Navy strike aircraft should have a longer range. Even so, it is likely tankers will be needed, especially given advances in adversary weapons. Organic tanking will continue to suffer from the trade-offs inherent to limited hangar space and size restrictions. Seaplanes combine inorganic tanking capability without the limitation of being tied to land and potentially vulnerable bases. An additional capability provided by the seaplane is long-range search and rescue, much needed in the vast expanse of the Pacific Ocean.

The carrier air wing provides a unique asset for combatant force commanders. A moving airfield with dozens of strike aircraft represents a force with which to be reckoned. However, the requirements inherent in operating stealthy high-performance aircraft from a carrier also mean the air wing depends on tanker support. Currently, the Navy does not possess a viable solution to significantly extend the air wing’s range. Developing a force of seaplane tankers would solve the tanker problem without reducing the air wing’s combat power.

The history of the Navy and the seaplane have long-been intertwined, for good reason. It is time to go back to the future.13

9. A seaplane carrying 100,000 pounds of fuel would be roughly equal in size to the P6M Seamaster. If optimized for tanking, however, the vehicle would be far more efficient with a higher aspect ratio wing and reduced thrust-specific fuel-consumption engines, among other features.

11. Estimate based on the cost of P6M Seamaster development, linearly extrapolated to 45 aircraft and normalized based on current year dollars. This should overstate the projected cost since research-and-development costs would decrease per aircraft.

13. There is, of course, another option: Resurrect the seaplane striking force in its entirety. See, David Alman, “Bring Back the Seaplane,” War on the Rocks, 1 July 2020.

Second Lieutenant Alman is an officer in the Alabama Air National Guard. He currently is a student in Specialized Undergraduate Pilot Training (SUPT). He previously earned a bachelor of science and master’s degree in aerospace engineering from Georgia Tech and worked as an aerospace engineer and management consultant.

Overcome the Tyranny of Distance

Give Amphibians a Second Look

By Norman Polmar, Author, Ships and Aircraft of the U.S. Fleet
Subsequently, in the United States during the 1920s and 1930s, Sikorsky developed a series of outstanding commercial flying boats.1 In June 1935, the U.S. Navy ordered a prototype for a ...